The objective of this article is to characterize the water consumption pattern and water end-uses of low-income houses located in Florianópolis, Southern Brazil.

The study was conducted in 48 low-income households in the metropolitan region of Florianópolis, Santa Catarina (Figure 1). In order to select the studied households, one of the following criteria was considered:

Each studied household was classified taking into account their income as follows:

The influence of household’s socioeconomic characteristics, i.e., number of residents and total monthly income, on the water consumption patterns was analyzed.

The water end-use was determined through interviews, for which householders reported the frequency and duration of use for each water fixture and appliance. For fixtures and appliances used on a daily basis, householders were asked to describe the hourly consumption pattern by estimating the average frequency of events or total duration of use at each hour of the day. For fixtures and appliances used on a weekly or monthly basis, householders estimated their respective frequency of use per week or month.
Moreover, the flow rate or water consumption per cycle for each water fixture or appliance was determined through an on-site assessment. The usual water flow rates were calculated by asking householders to open taps and showers for three times at the typical flow rates used, and then by measuring the total volume during 10 s for each of the three events. From the three measured flow rates, an average flow rate was calculated. In addition, information about the water consumption per cycle of washing machines and toilets with cisterns was also obtained from the product technical specifications or the PROCEL (Brazilian Energy Efficiency Program) catalog [22]. The flow rate for toilets with flushing valves was considered equal to 1.7 L/s as per the Brazilian Plumbing Code NBR 5626 [23].
The monthly water consumption for each water fixture or appliance was calculated by multiplying either their respective average flow rate and estimated total usage time per month (Equation (1)), or their respective average water consumption per cycle and estimated number of events per month (Equation (2)).
The water consumption was estimated on a monthly basis to allow a comparison with total water consumption (m3 per month per household) fixed by the local water utility and with data from literature.
Cflow = Q × t
where Cflow is the monthly water consumption [m3/month] of the fixtures measured by flow rate; Q is the average flow rate [L/s]; t is the total usage time [seconds/month];
Ccycle = c × F
where Ccycle is the monthly water consumption [m3/month] of the fixtures measured by cycle; c is the water consumption per cycle [L/cycle]; F is the frequency of use [cycles/month].
The water consumption estimated for toilets with flushing valves was performed by multiplying the flow rate of this water fixture as indicated in the Brazilian Plumbing Code NBR 5626 [23] and the average time of flushing valves use in the households.
To represent the water end-use, a descriptive statistic approach was performed by showing the mean value with 90% confidence interval. As the 48 households sample was very heterogeneous, the 90% confidence interval was chosen instead of higher confidence possibilities, to avoid large amplitudes of the results.
As for this paper analyses, the chosen confidence interval can represent 90% of the sample. The interval was calculated using the Student's distribution as an alternative of normal distribution, as the population mean is unknown, assuming that the values were normally distributed.
A degree of freedom equal to the sample size minus one (i.e., n−1) was considered. The calculations were performed using the computer program Minitab 16 [24] by using Equation (3). Confidence intervals were determined also for each studied income group. Water end-uses were classified into potable (kitchen and bathroom taps and showers) and non-potable (toilet flushing, washing machine, and service area and external taps). where x is the mean value of the sample; S is the standard deviation of the sample; n is the size of the sample; t0.05(n-1) is the statistic of the Student’s distribution with 5% significance on each side of the distribution, totalling 90% confidence in both sides of the distribution; μ is the estimated population mean.
During the interviews, householders were asked to provide the monthly water consumption pattern recorded in their water bill for the previous 12 months prior the study. This information was used to determine the average monthly water consumption of households, as well as the basis to determine whether or not water end-use estimations were within the expected water consumption range. Moreover, the following information was also obtained from water bills: water tariff type (e.g., standard residential tariff, low-income residential tariff, etc.), sewage tariff type (e.g., 80% of water bill charge, 100% of water bill charge, no applicable as sewage is treated on-site), the total water and sewage charges.
The validation of estimated end-uses was performed by comparing the combined estimated water consumption of each water end-use with the expected water consumption (i.e., ±20% of the average water consumption recorded by the water utility). This study has considered a ±20% between the average water consumption recorded by the water utility and the water consumption values obtained by the analysis as a sufficient estimate. When the estimated water consumption was outside the upper and lower limits of the expected water consumption, interviews were repeated or the estimation was considered as invalid. 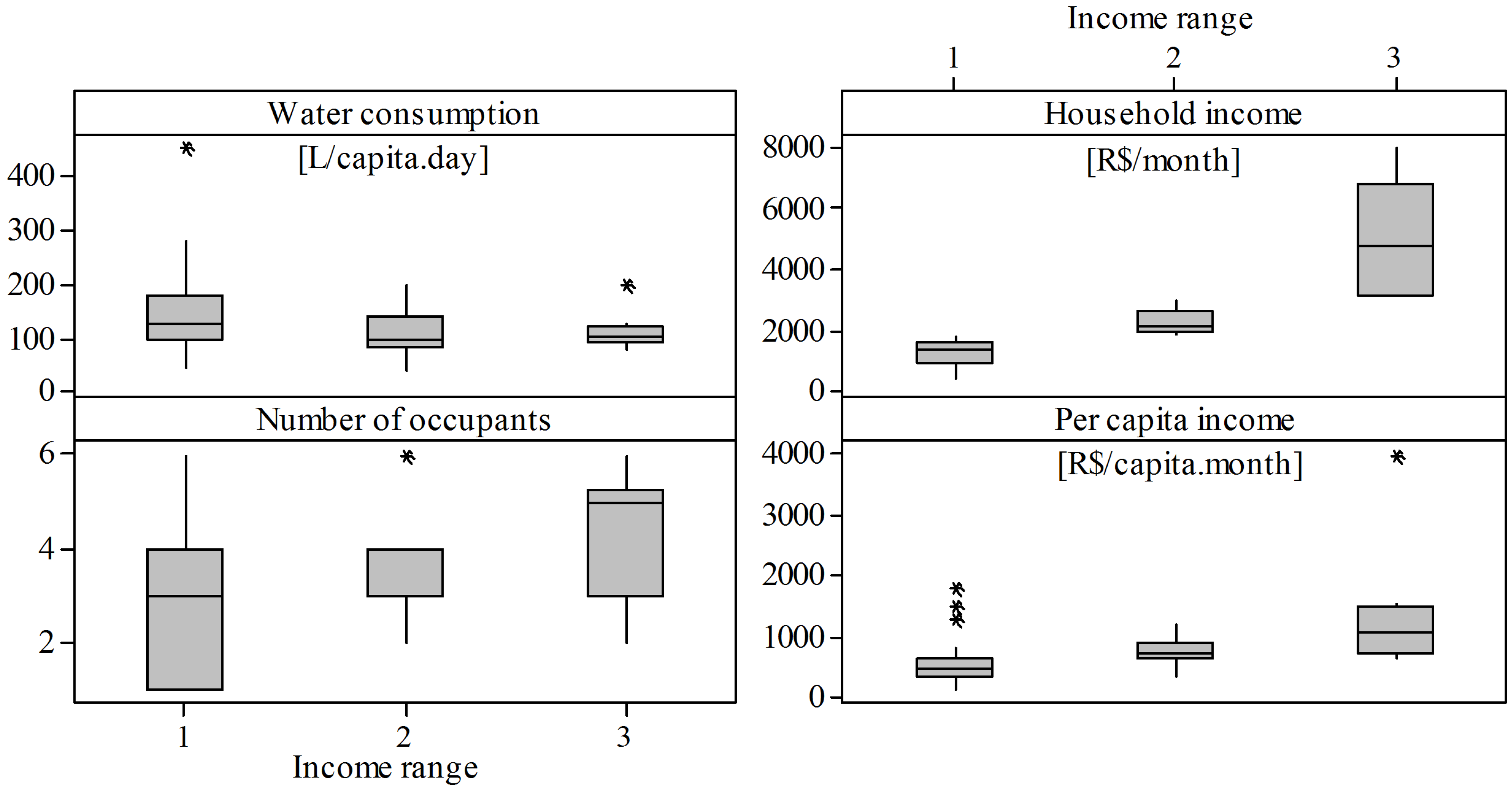 The maximum monthly household income was equal to R$8,000.00 (US$3,636.36), while the highest income was equal to R$4,000.00 per capita (US$1,818.18). These maximum values are likely outliers as the median values are considerably lower, closer to R$4,100.00 for total income, and R$1,000.00 for per capita income, for income range 3. The number of occupants in households ranged from one to six, with an average value of four occupants.
Among the different income ranges, it can be noticed that the median value of the number of occupants increases with the household income. The household income itself has higher amplitude in the third income range. The per capita water consumption has higher amplitude in the first income range, i.e., there was greater difference between the maximum and minimum water consumption. Furthermore, the sample of houses in the first income range had more data and these data varied widely.

Table 6. Average percentage water end-uses and lower and upper limits for 90% confidence.
Notes: (1) LL is lower limit values for 90% confidence. (2) UL is upper limit values for 90% confidence.
By using confidence intervals, the variability of the water consumption pattern for each appliance was estimated. For instance, the use of shower in households classified within the income range 1 represented, on average, 30% of the water consumption, ranging from 25% to 36% with a confidence interval of 90%. Kitchen tap and toilet flushing had comparable monthly water consumption patterns; however, they were not significantly different with 90% confidence interval, due to their large internal variation among studied households.
Non-potable water end-uses (toilet flushing, washing machine, and laundry and external taps) were equivalent on average to 42%–45% of the total water consumption in households. Such end-uses can be supplied with alternative water sources, including rainwater for all end-uses thereof. Greywater for toilet flushing and external taps could be used to supply 23%–32% of the total water demand in households; whereas it could be produced from 55% of the wastewater streams generated in the households from showers, bathroom taps, washing machines, and laundry tap. Therefore, this water source has a great potential for use, as the supply capacity of greywater surpasses the demand.

Some limitations were observed in this study, such as the absence of specific meters (sensors or data loggers) for measuring flow rates and the frequency and duration of use of water appliances to determine the water consumption and end-uses.
There was no measurement of average volume per cycle usage in toilets with cistern and washing machines. These volumes were assumed equal to the suggested values by the Brazilian Plumbing Code NBR 5626 and values presented by manufactures and in the PROCEL catalog, respectively.

Ana Kelly Marinoski contributed in the literature review, by searching for studies of end-uses and water consumption per capita in houses; wrote the introduction and participated in the field survey. Abel Silva Vieira developed the questionnaires and spreadsheets used to calculate water end uses; coordinate the field survey and interviews with householders. Marinoski and Vieira participated in the composition of the manuscript in the method, results and conclusion sections. Arthur Santos Silva participated in data processing, elaborated the statistical analysis, graphs, tables and figures. Enedir Ghisi elaborated the concept and the idea of the manuscript content and reviewed the manuscript.