:
The aim of this study is to assess the relationship between rainfall and stream flow at Broughton River in Mooroola, Torrance River in Mount Pleasant, and Wakefield River near Rhyine, in South Australia, from 1990 to 2010. Initially, we present a short term relationship between rainfall and stream flow, in terms of correlations, lagged correlations, and estimated variability between wavelet coefficients at each level. A deterministic regression based response model is used to detect linear, quadratic and polynomial trends, while allowing for seasonality effects. Antecedent rainfall data were considered to predict stream flow. The best fitting model was selected based on maximum adjusted R2 values (), minimum sigma square (σ2), and a minimum Akaike Information Criterion (AIC). The best performance in the response model is lag rainfall, which indicates at least one day and up to 7 days (past) difference in rainfall, including offset cross products of lag rainfall. With the inclusion of antecedent stream flow as an input with one day time lag, the result shows a significant improvement of the values from 0.18, 0.26 and 0.14 to 0.35, 0.42 and 0.21 at Broughton River, Torrance River and Wakefield River, respectively. A benchmark comparison was made with an Artificial Neural Network analysis. The optimization strategy involved adopting a minimum mean absolute error (MAE).
Keywords:
Artificial Neural Network; lag response model; rainfall and stream flow; wavelet coefficient; Akaike Information Criterion

A review of rainfall-runoff modeling has been given by [1]. Rainfall and stream flow models can be applied to a diverse range of purposes including daily control of reservoirs, projecting future stream flows and flood management. Rainfall and stream-flow models can be classified as physically based, conceptual and empirical. Physically-based models include the Système Hydrologique Européan with sediment and solute transport [2] and Gridded Surface Subsurface Hydrologic Analysis [3] both of which require extensive spatial and temporal data and typically are used for small catchments. An example of a conceptual based model is the Modèle du Génie Rural à 4 paramètres Journalier (GR4J), which has been developed for understanding catchment hydrological behavior [4]. Other examples of conceptual rainfall-runoff models are the Sacramento Soil Moisture Accounting Model [5] and the SIMulation and HYDrologic model (SIMHYD) [6], which can be applied either as a lumped or gridded application. SIMHYD estimates daily stream flows from daily rainfall and areal potential evapotranspiration data. The class of empirical models includes time series models [7,8,9,10,11,12,13]. An advantage of an empirical model is that it can be fitted to situations where the hydrological data are restricted to rainfall and stream flow time series. A further advantage is that in a parametric test, a distribution can be fitted for assessing the hydrological behavior for any time period in any region. In addition, they can represent either linear or non-linear relationships. Time series models perform as well as physically-based alternatives [14]. Combined a conceptual model with an artificial neural network (ANN) for forecasting inflow into the Daecheong Dam in Korea [15]. Compared the wavelet decompositions of rainfall and runoff at four sites in the Tianshan Mountains [16]. They aimed to distinguish between errors in timing and errors in magnitude of hydrograph peaks. They used a cross-wavelet technique to quantify timing errors and hence provided an empirical adjustment to model predictions of stream flow.
In this study, we have proposed a novel method for assessing short-term rainfall and stream flow models. The travel time between rainfall and stream flow gauges using cross-correlation functions [10,17]. They reported that the travel time was less than one day for the Onkaparinga catchment in South Australia. In this paper, we presume that there is a higher order relationship between rainfall gauge and stream flow data. It is, therefore, important in this study to construct the correlation structure. Linear regression models are commonly used for time series analysis [18], particularly for assessing evidence of trends, higher order changes and variability, including allowing for seasonality. We developed deseasonalized and detrended time series rainfall and stream flow models from deterministic regression models including linear, quadratic and cubic terms. These models take account of both lag rainfall and the influence of stream flow. The results of this study will be useful for water managers and policy makers involved in sustainable water resource management and climate change adaptation for the catchments used in this study. The approach is capable of modeling the non-linear relationships between inputs and outputs using ANNs [19]. The first advantage of ANN is that it only requires a small number of parameters and learns through a number of training iterations involving adjusting the parameters (weights) of the network [20]. A second advantage is that it is useful in situations where it is complex to build a physical or conceptual model, such as hydrological modeling of rainfall- stream flow processes [21,22,23,24,25]. ANN models were useful to find the relationships between rainfall and river flow data in a river basin in India [26]. We present a statistical approach that uses the deterministic features of a regression model to build many neural networks with a combination of different lagged input patterns. A wavelet based regression model for stream flow using the discrete wavelet transform (DWT) of the entire time series [27]. They also provided a comparison of their model performance with ANN. A chaotic stream flow model using an ensemble wavelet network [28]. Used wavelet analyses of rainfall and runoff and wavelet rainfall–runoff cross-analyses to investigate the temporal variability of the rainfall-runoff relationship [17,29]. They found that wavelet transforms provide a physical explanation of the temporal structure of the catchment response.

The analysis is based on data from three rainfall and stream flow stations in South Australia, as presented in Figure 1. The Broughton River (BR) station is at Mooroola, which is located approximately 40 km north of Port Broughton and 20 km south west of Port Pirie. Torrance River (TR) station is located at Mount Pleasant, and its rivers and tributaries are highly variable in flow and together drain an area of 508 km2. Wakefield River (WR) is an ephemeral river near Rhynie, with a catchment area of approximately 1913 km2. 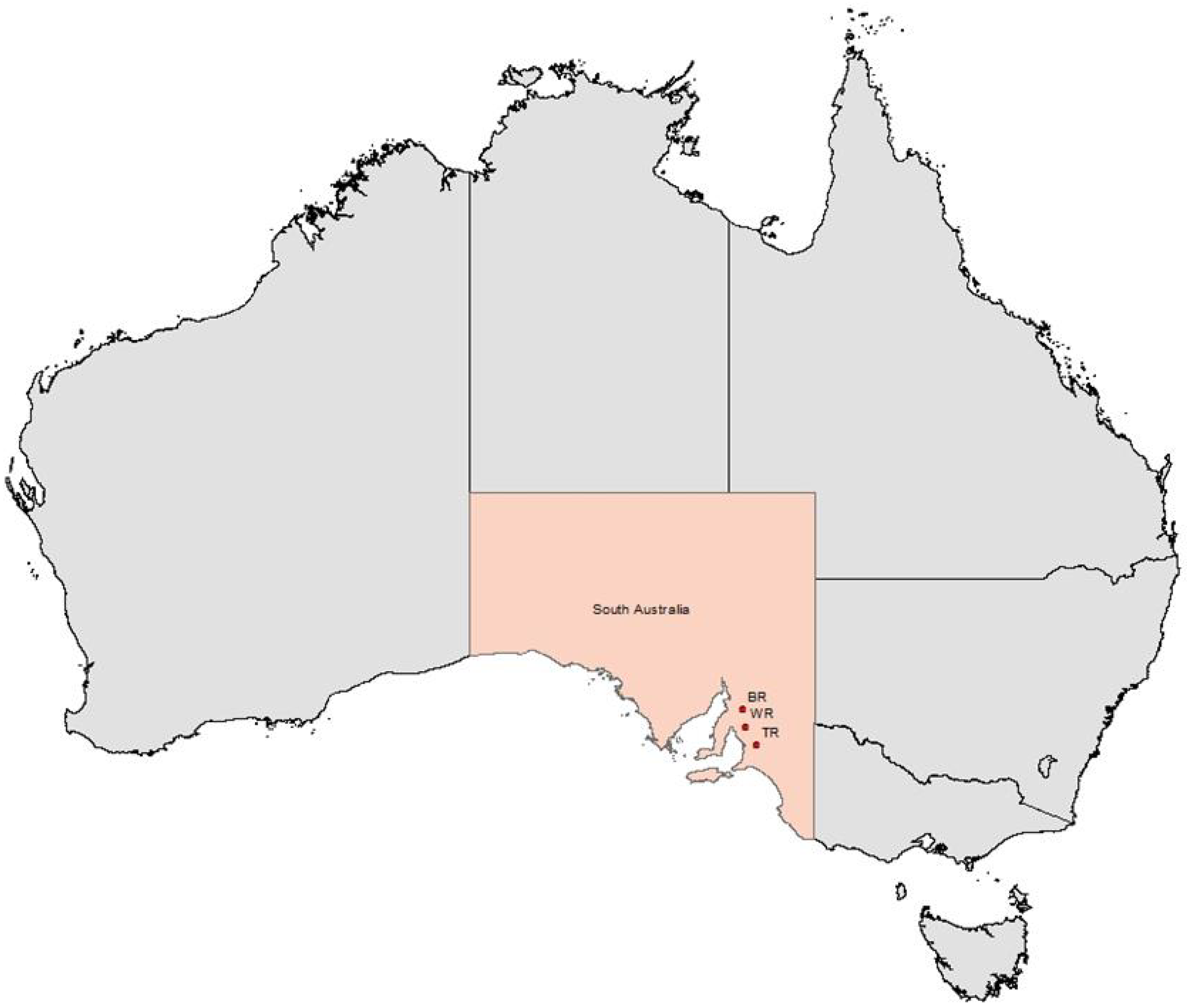 3.1. Assessing the Relationship between Rainfall and Stream Flow 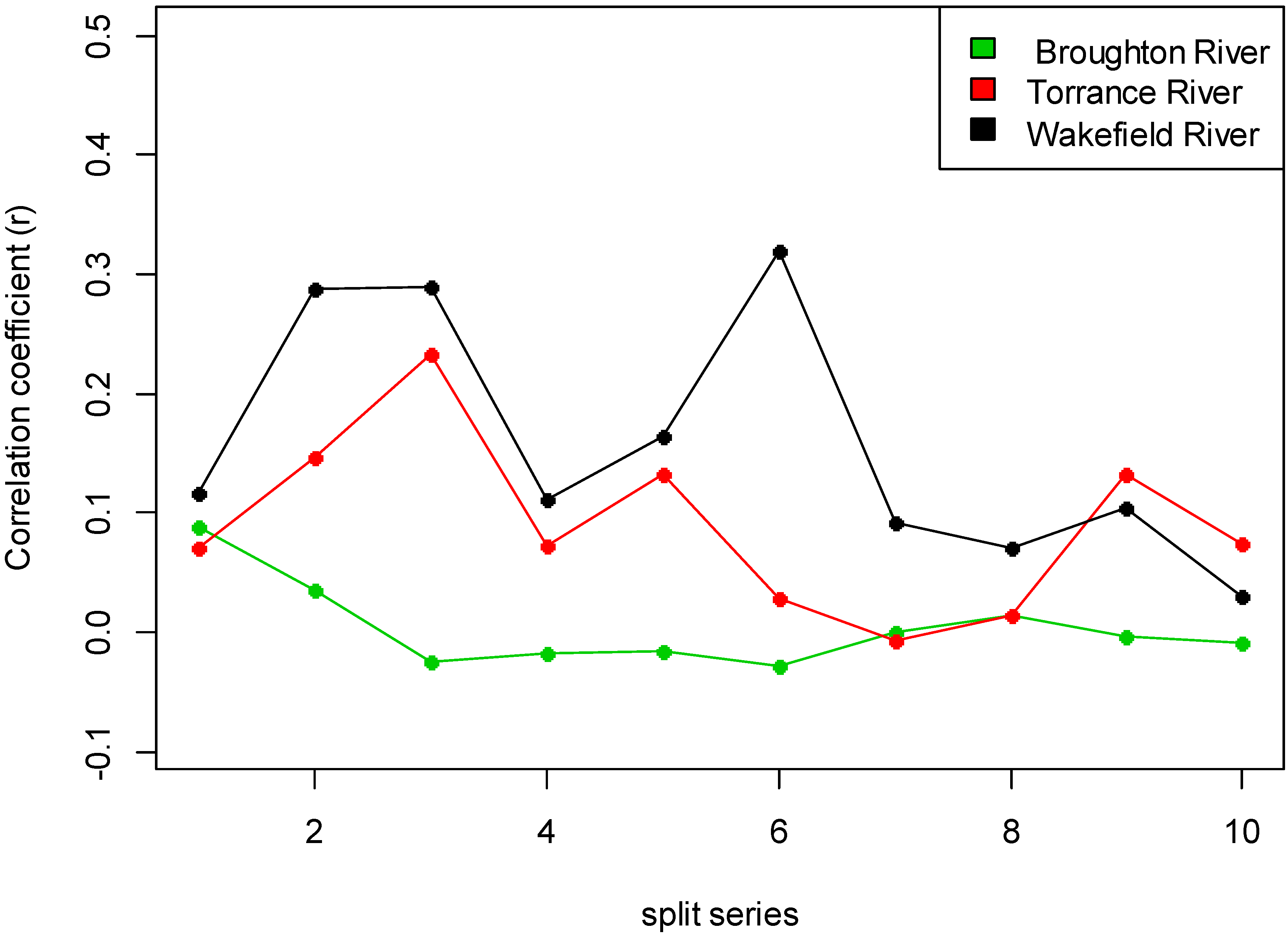 In Figure 4, we demonstrate the versatility of stream flow prediction. It can be seen that this is a non-linear relationship when expressed in terms of the physical interpretation of stream flow based on rainfall.

Artificial neural network (ANN) techniques are motivated by the principles of biological nervous systems [36]. Although there are different types of ANN, the multilayer feed forward network is the most commonly used technique. For example, a common approaches of training using back-propagation in a multi-layer feed forward network [23]. The network consists of input, hidden and output layers. Each layer is fully connected with the proceeding layer with weights in each connection, as shown in Figure 5.

Initially, we split the whole series with a dyadic signal process for assessing the short term relationship between rainfall and stream flow including correlation using Haar wavelets. We have presented an innovative idea for the hydrological community for assessing stream flow for any catchment. In particular, the end user could assess the variability of changes and construct higher order correlations from 2 days up to as long as required. In addition, this study would be helpful for predicting stream flows using deterministic regression techniques, particularly where there is evidence of changes of statistical distribution characteristics, which is important for Water Sensitive Urban Design, as clearly demonstrated [39]. Using a deterministic regression based response model we found an increasing trend in stream flow when rainfall increased significantly. Predicted stream flow was more influenced by the previous few days’ stream flows than when considering the entire previous period of stream flow. We also developed artificial neural network models for three locations. The results show that the influence of lagged rainfall and stream flow lies within a short temporal window. The results demonstrate that the ANN models perform better for Broughton and Torrance River in capturing the rainfall and stream flow relationships.

This study was funded by the Goyder Institute for Water Research under their Climate Change program. The researchers are grateful to the developers of the R project for software code and to the Australian Bureau of Meteorology for providing meteorological data.