:
Water can contain pathogenic viruses. Many studies on RNA virus sources have shown that water can transmit them. However, there are few reports on pathogenic DNA virus transmission through water, such as adenovirus, which pose a widespread public health risk. Therefore, this study aimed to show waterborne viral transmission by detecting viruses in pooled human whole blood samples, tap water, and natural water from Mueang District, Phayao Province, Thailand, using a metagenomic approach. Viral prevalence in whole blood samples was measured by polymerase chain reaction (PCR) and quantitative PCR (qPCR), and environmental factors that affect viral infection were assessed. Metagenomics results showed that Epstein–Barr virus (EBV) members were among the prominent cancer-associated oncogenic DNA viruses detected in human blood and all water types similar to the EBV reference sequence (NC_007605). There were 59 out of 813 (7.26%) human whole blood samples that were positive for EBV DNA based on PCR and qPCR for the EBNA-1 and EBNA-2 genes. Water- and blood-borne human oncogenic EBV should be a concern in tap water treatment and blood transfusion in patients, respectively. Therefore, the detection of EBV in water suggests that transmission via water is possible and should be investigated further.
Keywords:
EBV; blood; blood-borne virus; tap water; natural water

A total of 5 L of each water sample was filtered using a Rocker 300 vacuum pump (Waller Chemical Thailand Co., Ltd., Bangkok, Thailand) using MF-Millipore pore size 0.025 µm MCE filter nitrocellulose membranes (MF-MilliporeTM, 47 mm; Merck Millipore Ltd., Tullagreen, Carrigtwohill, Co. Cork, Ireland) and on top with 0.45 µm membrane filter. Next, DNA was extracted from all microorganisms, including viruses, on the filter membranes using DNA extraction from filter membranes method. It should be noted that the smallest viruses are about 0.02–0.4 μm in diameter (EBV is approximately 0.12–0.18 μm in diameter) [54,55,56,57]. Microfiltration is generally considered appropriate for quantifying microbes and viruses 0.025–10.0 μm [58,59] in water samples [60,61].

Eight hundred thirteen human whole blood samples were collected from donors living around the natural water sources in the Mae Ka and Wiang Subdistricts, Phayao Province. Samples were collected from individuals aged 3–90 years, along with information on their sex, health status, and life history, including congenital disease, BMI, family cancer history, exercise, alcohol consumption, smoking, secondhand smoke, drinking water source, cleaning of water for consumption, and type of water used for brushing teeth, serving spoons, and eating fresh fruit and vegetables. The sample size was calculated as N = Z21−a P(1 − P)/d2 for an EBV prevalence (P) of about 2% [62]: Z = 1.96 for a 95% confidence level and d = 0.01. This study was approved by the Committee on Human Research Ethics in Health Sciences and Science and Technology, University of Phayao (Mae Ka, Thailand; 1.3/023/63). All procedures involving human participants performed in the study were in accordance with the ethical standards of the Declaration of Helsinki, the Belmont Report, the Council for International Organizations of Medical Sciences guidelines, and the International Conference on Harmonization in Good Clinical Practice. Informed consent was obtained from all subjects and/or their legal guardian(s).

The DNA extracted from the tap water, natural water and the pooled human whole blood samples were analyzed by shotgun metagenomic sequencing. The extracted DNA represented all viruses in the water and whole blood samples. Fraction steps were checked using Agilent 2100 and qPCR to confirm that sufficient target DNA was present in the end repairing range. For tail construction, sequencing adapters were ligated, and PCR enrichment steps were used to create the library. Sequencing was performed using the Illumina platform after library clustering with paired-end reads.

3.3. EBV DNA Detection by PCR and qPCR and Environment Factors

To assess the epidemic spread of EBV in various sub-districts in Phayao province, Thailand, GIS was used to connect and integrate EBV prevalence data from human blood samples across 15 subdistricts in the Mueang District and show their distribution as a map (Figure 4).

The findings of this study support the conclusion that water in developing countries continues to be unsafe. Human oncogenic EBV was present in natural and tap water. Finally, basic knowledge about tap water sterilization processes and viral control should be promoted. Blood-borne oncogenic EBV should be a concern for blood transfusion in patients. Therefore, the detection of oncogenic EBV in water suggests that transmission via water is possible and should be investigated further.

This research was funded by the University of Phayao (grant no. FF64-RIB005).

This study was approved by the Committee on Human Research Ethics in Health Sciences and Science and Technology, University of Phayao (Mae Ka, Thailand; 1.3/023/63). All procedures involving human participants performed in the study were in accordance with the ethical standards of the Declaration of Helsinki, the Belmont Report, the Council for International Organizations of Medical Sciences guidelines, and the International Conference on Harmonization in Good Clinical Practice. 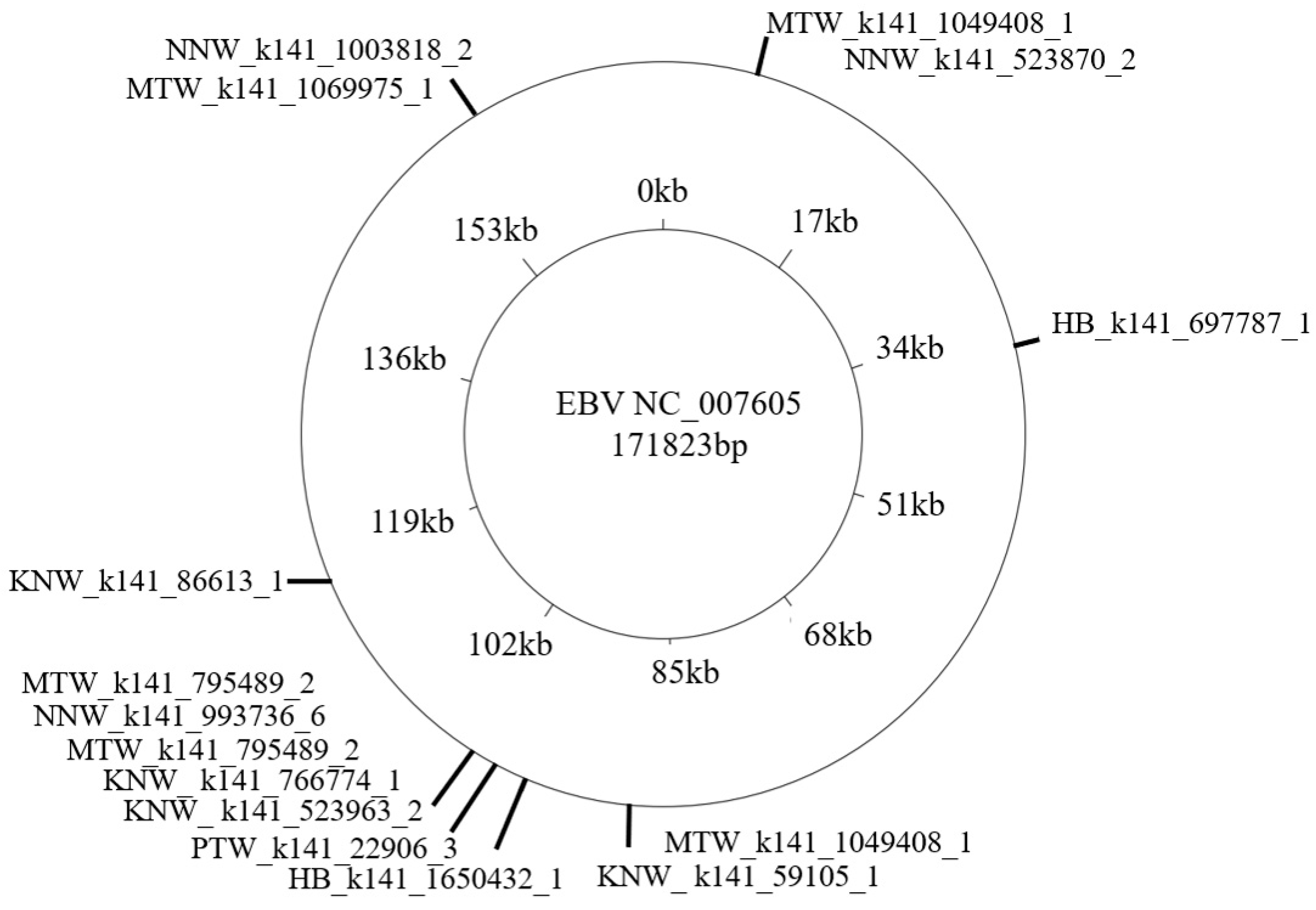 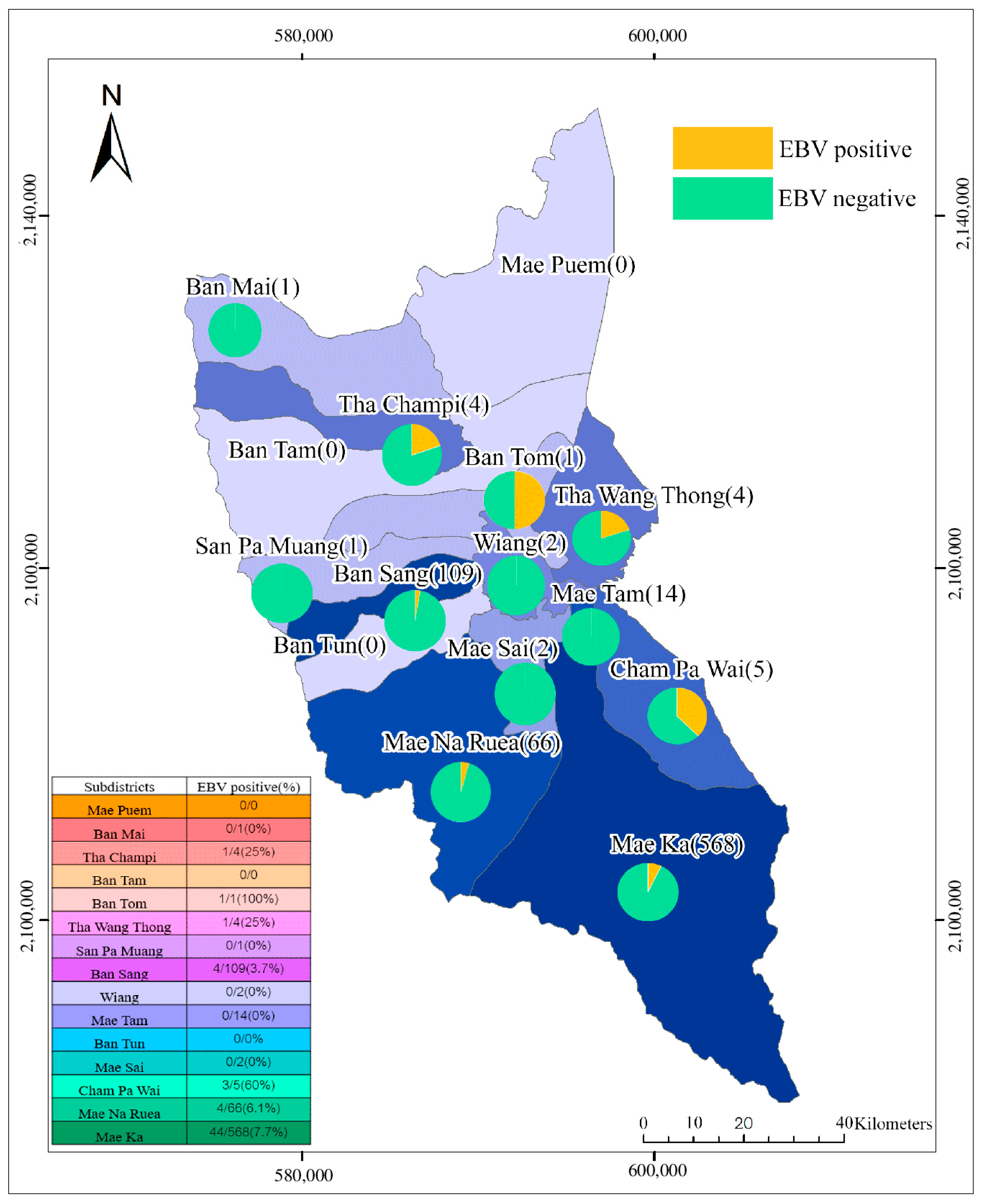