The prevailing concern in the Western Canadian Plains is that glaciers from the eastern Canadian Rocky Mountains (CRM) are losing mass, thus affecting groundwater recharge in the Plains. The generally accepted hypothesis is that those glaciers are the geological source of groundwater for aquifers located in the Plains. The aquifers located in this region, close to the eastern part of the Rockies, represent a major source of water for the local population. It is believed that aquifer recharge originates as infiltration from snowmelt and ice in the Front Ranges of the eastern Rockies. A growing concern relates to the significant glacier melt estimated from glacier mass balances, which indicate that glaciers and ice fields have experienced considerable mass losses over the last 15 years, between 1 and 5 km3 per year, thus reducing recharge. However, deep groundwater flow under melting glacier conditions in mountainous regions is poorly understood. In this study, three 2D numerical hydrogeological models are built in order to simulate the groundwater flow under the glaciers from the Main and Front Ranges of the CRM and the Plains in the province of Alberta, Canada. Numerical results and a sensitivity analysis indicate that up to three different regional groundwater-flow systems are present in the region. These systems reveal the time- and space-scales associated with the combination of a mountainous region, foothills, Plains, and deep geological conditions. Based on the current knowledge of the hydrogeology of the study area and numerical modelling results, it is highly unlikely that the melting of glaciers affects groundwater in the Plains in the immediate future. The contribution of glacier water in the eastern part of the Rockies is time-dependent with delayed groundwater flows of 1000s of years in the Front ranges, 1000s to 100,000s of years in the foothills and Foreland; and 100,000s to millions of years to the Plains, at the regional scale. View Full-Text
Keywords: glacial melt; groundwater flow; conceptual models; Canadian Rockies glacial melt; groundwater flow; conceptual models; Canadian Rockies
►▼ Show Figures 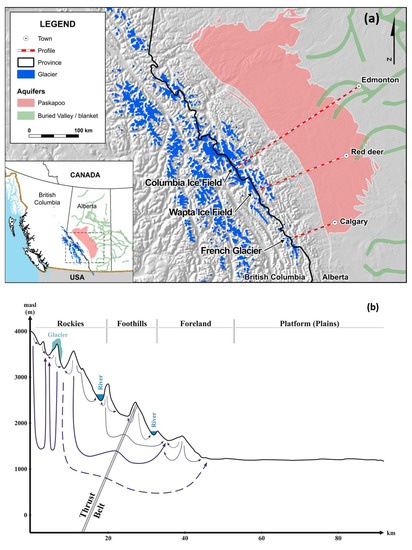