Fresh Water Use in Florida: Trends and Drivers
Previous Article in Special Issue

:
In recent years, algal blooms break out frequently and often accumulate in nearshore zones of eutrophic lakes and reservoirs, which seriously threaten regional water supply security. It is of great significance to grasp the status of algal blooms in key nearshore zones timely for the emergency prevention and control of algal blooms. A video surveillance system provides a new method for achieving this goal. The results of algal-bloom monitoring in current research, however, are usually interfered by onshore vegetation for their similar textural features. Accordingly, there are great limitations in current works in terms of decision support for emergency prevention and control of algal blooms. To solve this problem, a binocular video surveillance system based an accurate monitoring method of algal blooms is proposed in this paper. Binocular images of monitoring areas are obtained periodically by exploiting the binocular video surveillance system, which is performed by a stereoscopic 3D reconstruction method to obtain the 3D point cloud data of monitoring areas. Afterward, water regions and non-water regions are intelligently discriminated according to the elevation characteristics of point clouds, and only the image data of the water regions are finally adopted for algal-bloom extraction. Thus, the influence of onshore vegetation on the extraction of algal blooms can be eliminated. The system was implemented and applied, and the experimental results show that the proposed method can eliminate effectively the interference of onshore vegetation on the extraction of algal blooms and improve significantly the accuracy of existing methods for algal-bloom monitoring based on video surveillance system.
Keywords:
lakes and reservoirs; nearshore zone; algal bloom; binocular video surveillance; stereoscopic 3D modeling

2.1. Basic Principle of Algal Extraction Based on a Video Image

In the common method for algal-bloom extraction based on a video image [31], a multi-scale deep network framework is first constructed by VGG (visual geometry group) classification network, which is then used to classify coarsely the video image. Next, the coverage of algal bloom in the given video image is estimated to distinguish among algal blooms, shadows, and turbid water bodies. Finally, the given video image is divided according to color, and algal blooms can be identified effectively by exploiting random forest methods. The basic procedure for algal-bloom extraction is shown in Figure 2.

The binocular vision image acquisition system utilized in this paper is powered by USB and consists of two synchronous camera modules with 1 million pixels. Details of this system’s parameters are listed in Table S1. During the experiment, first, to monitor the target area at regular time, the synchronous camera modules are fixed at the designated position by a bracket and connected to the computer (PC) through a USB data cable (Figure 3). Next, by using code written in C++ programming language, the monitoring area of the system is captured regularly to obtain the binocular image of the target area.
The aforementioned system was used to acquire binocular images of key nearshore zones of Lake Chaohu during July 2022. In the process of binocular image acquisition, the influencing factors, e.g., shooting angle, device height, and illumination intensity, were fully considered to guarantee that the collected image data could meet the requirements for 3D reconstruction of target water regions.

2.3. Accurate Extraction of Algal Blooms Based on Binocular Images

Binocular stereo vision (Figure S1) is a machine vision method based on the principle of parallax, which converts 2D image information into 3D geometric information by obtaining the depth information of the image. Three-dimensional reconstruction of binocular stereo vision includes five steps: image acquisition, camera calibration, image correction, stereo matching, and 3D reconstruction.
Use the binocular image acquisition system described in Section 2.2 to acquire simultaneously binocular images of the target water regions, and then pre-process the obtained images to prepare for the subsequent experiments.
Camera calibration is divided into two substeps. The first is to perform single-target calibration on the two cameras to obtain their own parameters (internal parameters and distortion parameters), and the other is to obtain the relative position information of the two cameras (external parameters). Detailed parameters of binocular camera calibration are shown in Table S2.
When using a binocular camera to collect binocular images, it is inevitable that the two 2D image planes cannot be completely coplanar. In addition, the binocular images are distorted due to the use of a wide-angle lens.
The image distortion caused by shooting with a wide-angle lens can be eliminated by image correction on the binocular image. Afterward, complete coplanar alignment of the two image planes can be achieved, and it can be guaranteed that there only exists parallax in the horizontal direction in binocular images. Then, the stereo matching problem can be reduced from 2D searching to 1D searching, and the search efficiency of stereo matching can be improved (Figure S2).
Stereo matching is an important step in the 3D reconstruction procedure of binocular stereo vision, and its purpose is to find the corresponding points from the left and the right images, calculate the feature points of the two images, establish the corresponding relationship between the calculated feature points, and obtain the disparity image (Figure S3) based on the 2D information from the two images.
Three-dimensional reconstruction within the binocular stereo vision method is to obtain dense 3D point cloud data by calculating the depth value of the stereo matching image; 3D reconstruction of binocular stereo vision is shown in Figure 5.

(2)
Obtaining the pixel coordinates of the non-water regions

(3)
Deletion of non-water regions in the left image

By using the existing video image and the algal-blooms recognition method, the water regions image data of the left video image generated in Section 2.3.2 is used to recognize algal blooms. To a certain extent, this can eliminate the uncertain accuracy of the extraction result for algal blooms that is caused by the interference of nearshore vegetation, and realize the accurate recognition of algal blooms.

Taking Lake Chaohu Basin as the experimental object, the calibrated binocular video surveillance system was used to sample the key nearshore zones of Lake Chaohu. Then, based on the Visual Studio 2019 software development tool, OpenCV 3.4, PCL (point cloud Library) 1.12.0 and C + + development programming language, accurate recognition of algal blooms based on the binocular video monitoring system is realized.
To verify the advantages of the proposed method, multiple sets of video images were collected in both the algal-free areas and the algal areas for experiments. Firstly, the collected video images are manually interpreted. (The non-water regions in the video images were manually removed by manual recognition, and the actual areas of algal blooms in the video images were identified by the algal-bloom recognition method in the video images within water regions). The results of artificial interpretation were considered as the actual spatial distribution of algal blooms.
Then, the method described in [31] and the method proposed in this paper were used to recognize algal blooms in the left video images, and comparison experiments were made between the two methods. The results of the comparison are shown in Table 1, and the identification results for algal blooms in the algal-free area are shown in Table 2.
From Table 1 and Table 2, it can be seen that the recognition results using the proposed method are closer to the manual interpretation results, compared with the method described in [31].
Afterward, the PAs of the recognition result were calculated separately, using the PA of the manual interpretation result as the true value. Finally, the recognition results of the method described in [31] and the method proposed in this paper are compared with the manual interpretation result. The comparison results of algal areas and algal-free areas are shown in Table 3 and Table 4, respectively.
It can be concluded from the above experiments that the errors of algal-bloom recognition for the proposed method are far lower than those for the method described in [31]. It can be seen from Table 3 and Table 4 that the errors of algal recognition are caused mainly by the interference of onshore vegetation. Accordingly, it is proved that using the method proposed in this paper to monitor algae blooms in the nearshore zones of lakes and reservoirs can effectively eliminate the influence of the onshore vegetation, and improve significantly the accuracy of algal-bloom monitoring.

An accurate monitoring method for algal blooms in the nearshore zones of lakes and reservoirs based on a binocular video surveillance system is proposed in this paper. The 3D point cloud reconstruction of the target area in the lakeside zone is first realized, based on the principle of binocular stereo vision. The pixel coordinates of non-water regions in 3D point cloud data are then calculated. The image data of water regions can be obtained afterward by processing the non-water regions pixel value of the image. Finally, the accurate identification of algal blooms in the key nearshore zones of the lakes and reservoirs is realized.
In this work, when distinguishing water regions and non-water regions in 3D point cloud data, the extraction results of the “water-land” boundary are not clear due to point cloud sparsity, which affects the accuracy of algae-bloom recognition to a certain degree. Therefore, we will give more attention to improving the stereo matching algorithm in our near-future work. In addition, only the area portion of algal blooms in the target region is obtained, while the accurate area of algal blooms is not calculated; we will try our best to solve this problem in our future work. 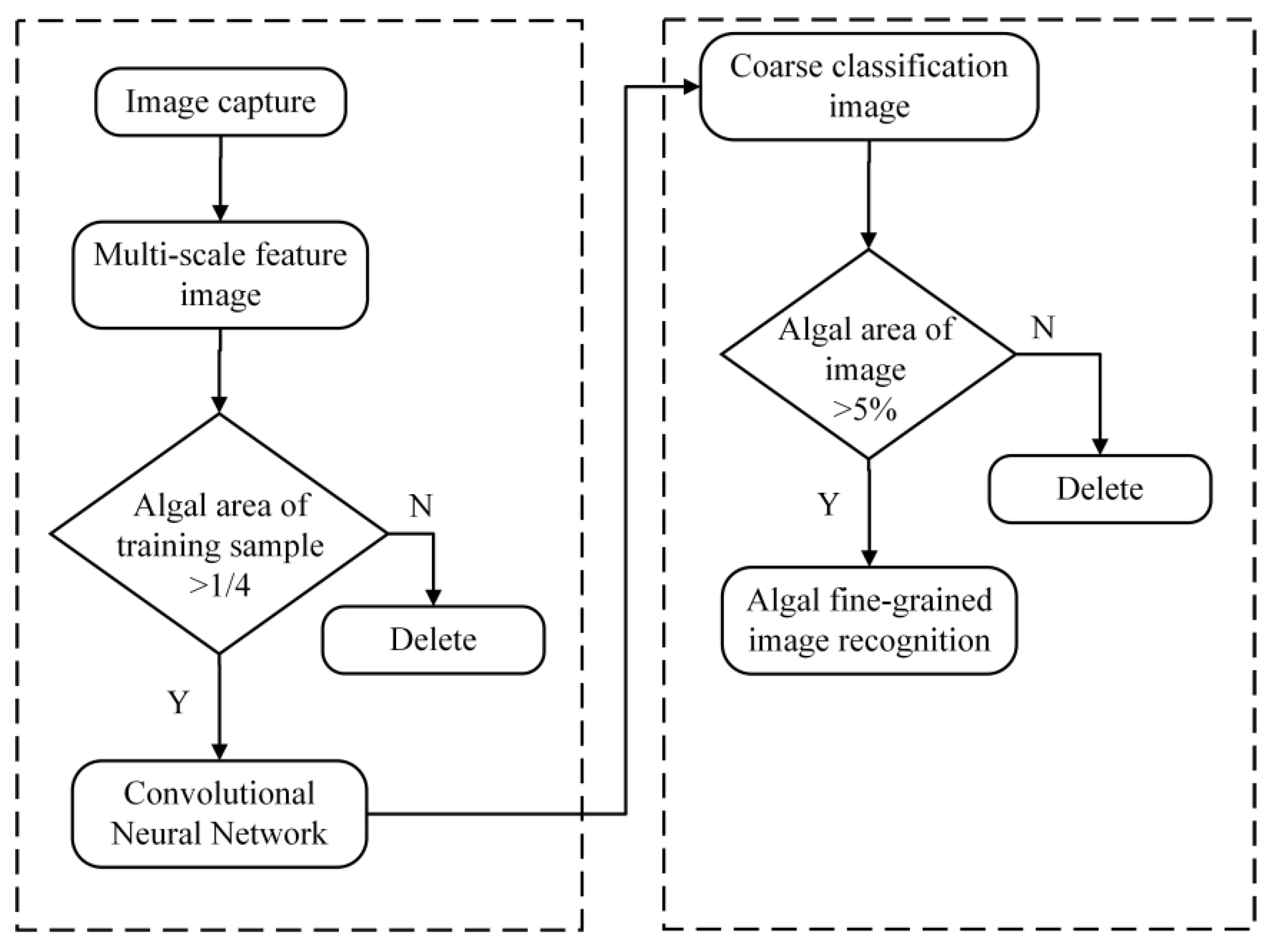 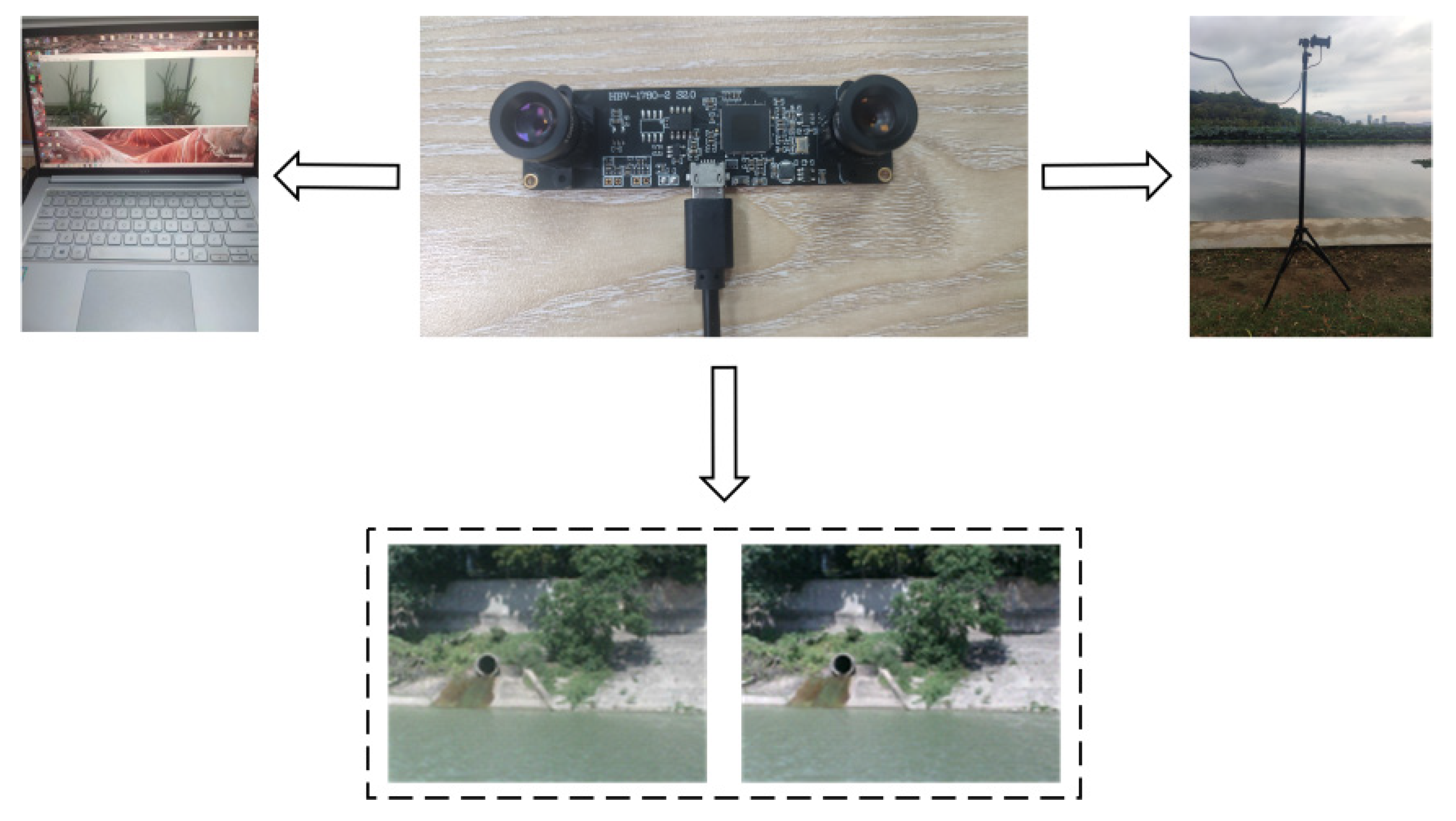 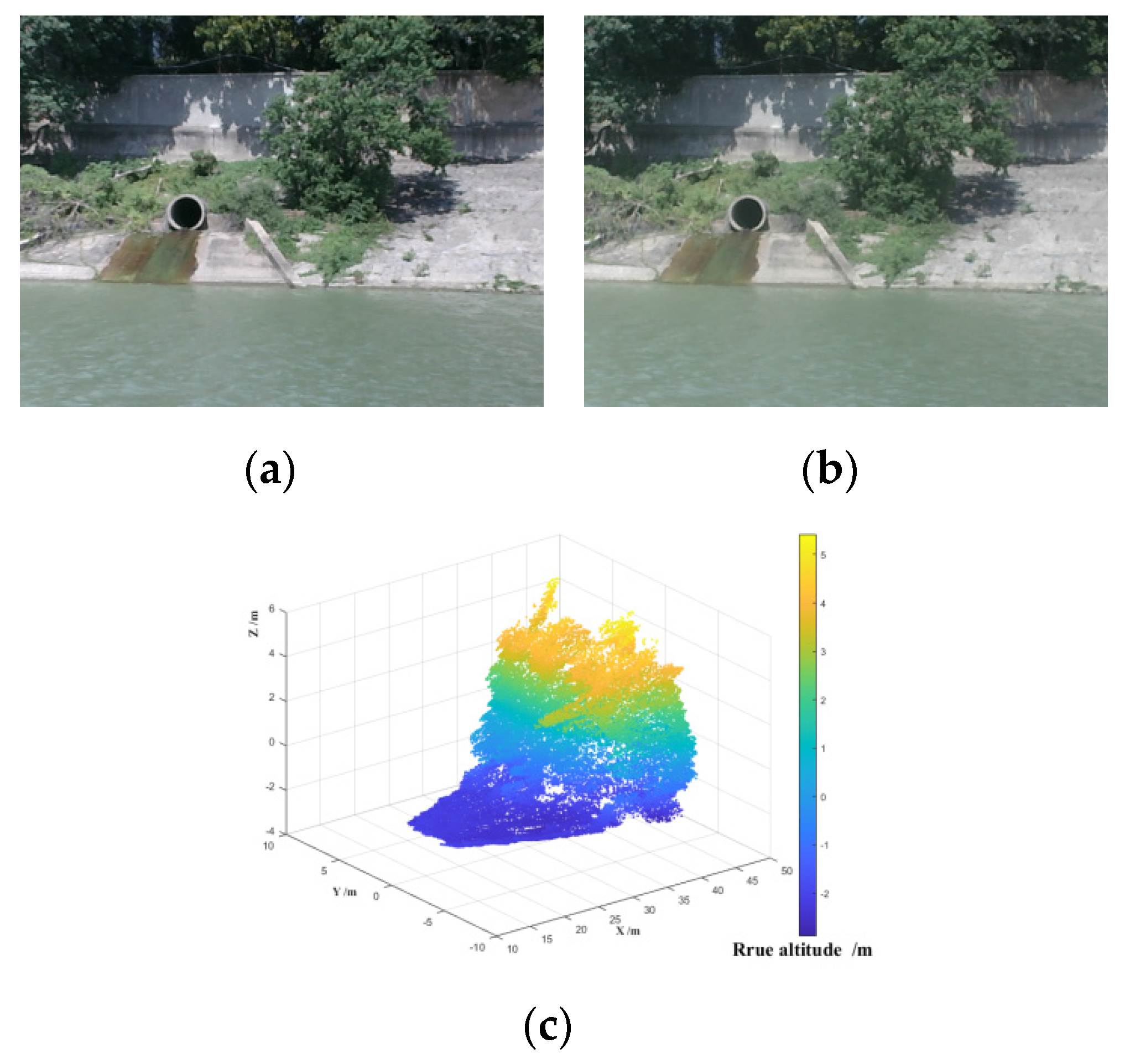 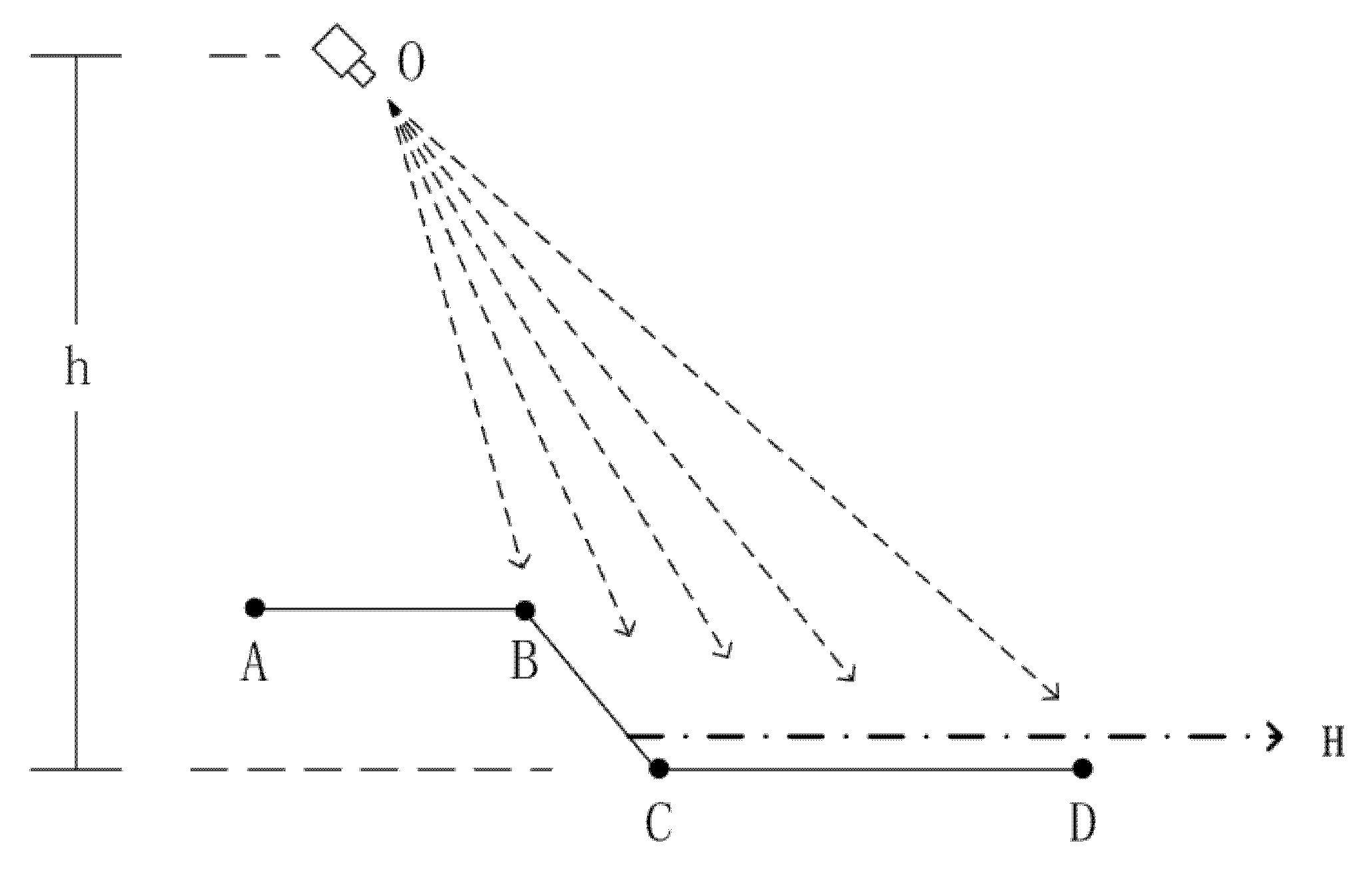