Effect Analysis of Supporting Structure and Surface Settlement on Deep Foundation Pit by Rainstorm: A Case Study in Zhengzhou

Xiaonangang Station is located at the intersection of the Zhengzhou–Kaifeng logistics channel and Zhengxin Road, which is laid along the Zhengzhou–Kaifeng logistics channel. Xiaonangang Station is the 23rd station in the first phase project of Zhengzhou metro line 8, which has no control buildings around the station. Figure 1a presents the foundation pit plan of Xiaonangang Station, where the pit was 238.95 m long, 21.1 m wide, and 17.14 m deep. In the pit, a bored pile and three layers of steel struts were adopted as the supporting structure, and the three-axis mixing piles were set as the water curtain. The cross-sectional design of this pit is displayed in Figure 1b.

3. Establishment of the Numerical Model

In order to simplify the modeling process and improve the calculation speed, the basic assumptions were as follows:

3.2. Determination of Model Size and Parameters

According to the soil layer distribution of the engineering, the soil layer parameters are shown in Table 2. Considering the influence range of dewatering well pumping [33], the soil behind the supporting structure on both sides of the foundation pit was taken as 100 m, and the length was in a 30 m range with large deformation due to heavy rain. The overall size of the model was taken as 30 × 221 × 60 m, and the calculation model and steel strut distribution are given in Figure 4. We constrained the normal displacements around the bottom of the model. The diaphragm wall was made of C35 concrete, the elastic modulus was 31.5 GPa, and the volumetric weight was 25 kN/m3. The elastic modulus of the steel strut was 206 GPa, and the volumetric weight was 78.5 kN /m3.

The selection of the soil constitutive model is the key to the success of numerical simulation. The current soil constitutive models can be divided into four categories: ① elastic models such as the linear elastic theory model, D-C model, etc.; ② the ideal elastoplastic model such as the MC model, DP model, etc.; ③ the hardening strain model such as the MCC model and HS model; and ④ the small strain model such as the HS-Small model, tangent stiffness model, etc. [34,35,36].
Foundation pit excavation is a typical unloading deformation problem [37]. The handing ability of different constitutive models for soil unloading deformation should be considered when selecting constitutive models.
The elastic model obeys the generalized Hook’s law, which is often used to simulate hard rock, but rarely used in soil simulation. The MC model, which is a representative model of the elastic–plasticity model, but does not consider the unloading and then loading of the soil modulus to be significantly greater than the first load modulus relation, so the simulation results tend to make the surrounding soil uplift and not according to the engineering practice, and the deformation characteristics of foundation pit excavation are unable to be simulated well. The hardening strain model, represented by the MCC and HS constitutive models, can distinguish the stiffness between the loading and unloading because it is considered as the hardening characteristic of soil, which is more suitable for the simulation of foundation pit excavation. The small strain model can characterize the more complex properties of soil, but it needs more parameters, which often require special tests to determine [38,39,40].
Obviously, one that can distinguish between the loading and unloading stiffness of the hardening strain type model is more suitable for this kind of foundation pit excavation simulation. Considering the MCC model parameters are difficult to obtain [41], it is generally used in the simulation of the soft soil and clay, and the Zhengzhou city region in HuangFan District [34] is mostly sand soil and silt soil, so the HS model is more suitable than the MCC model for the simulation of sand soil. Therefore, this paper adopted the HS model for the foundation pit simulation.

3.4. Analysis of the Simulation Results

According to the above engineering background, the assumed conditions and related parameters, the rainfall analysis conditions were established as shown in Table 3, and Figure 5 presents the contrast between the numerical simulation and monitoring:
Following Figure 5, when the foundation pit was excavated to the bottom, both the numerical simulation and monitoring the maximum displacements of the supporting structure appeared in the range of 11 m~13 m below the ground surface, and the difference in the maximum displacement was only 0.65 mm. After heavy rainfall, the supporting structure had great deflection, but the overall deformation trend was still a parabolic shape. The maximum deformation was 16.96 mm in numerical simulation and 16.47 mm in engineering monitoring, which were close to each other. Moreover, there was an obvious settlement groove in the soil outside the foundation pit. This indicates that the simulation deformation trend of the foundation pit supporting structure had a similar trend to the monitoring. Both of them showed a parabolic shape with small deformation in the upper part, large deformation in the middle part, and almost no deformation at the bottom. This shows that the numerical simulation exhibited a good result with the engineering monitoring results. The simulation assumption, calculation condition, and method are reliable, furthermore, the modal approach can provide a basis for further analysis.

4. Deformation and Stress Analysis of Foundation Pit before and after Rainfall

The excavation of a deep foundation pit will lead the stress field and displacement field of the surrounding soil to change, thus resulting in settlement of the ground surface, and the supporting structure will have a lateral displacement due to the soil compression. The finite element software was used to simulate the excavation of the foundation pit, and Figure 6 summarizes the partition diagram of the displacement and deformation characteristics. According to the deformation characteristics of the displacement field, the soil can be divided into two parts [42].

(1)
Area Ⅰ, In the Rankine active earth pressure zone, the soil displacement is mainly manifested as the squeezing into the pit and the soil subsidence;
(2)
Area Ⅱ, In the Rankine passive earth pressure zone, the soil displacement in this area mainly shows upward uplift due to the influence of excavation unloading and extrusion of the supporting structures on both sides.

4.2. Deformation and Stress Analysis of Foundation Pit after Rainfall

5. Analysis of Effect Factors of Rainfall on Foundation Pit

Before the rainstorm, the water level in the pit had been dewatering to 1 m below the excavation surface. Rainfall will increase the saturation of the surface soil inside and outside of the pit, and weakening of the friction between soil particles will cause the soil softening. With the rainfall infiltration, the unit weight of soil will increase; a short time heavy rainfall caused 1.5 m deep water outside the pit. Some leakage points appeared due to the water pressure difference between two sides of the supporting structure. The pit filled with water, which made some steel struts fall off. In order to research the influence factors of heavy rainfall on the deep foundation pit, the numerical simulation method was used to carry out single factor analysis, and several factors were analyzed, respectively, which may cause the supporting structure and surface settlement to change. The calculation results are displayed in Figure 9.

The influence range of rainfall on the soil is about 0.9 m deep [4,43], so the range of soil softening and severity increase was 1 m below the ground surface and 1 m below the excavation surface of the foundation pit. The softening degree is the reduction in the elastic modulus by 40% [3]. The displacement of the foundation pit supporting structure and the ground surface settlement before and after soil softening are shown in Figure 9a.
When the soil inside the pit softened and the unit weight of soil outside the pit increased, the maximum displacement of the supporting structure increased from 11.05 mm to 11.17 mm by 0.12 mm, an increase of 1.09%. The soil outside the pit exhibited obvious settlement, and the maximum settlement increased from −8.04 mm to −10.08 mm, an increase of 25.37%. The softening of soil had little influence on the supporting structure of the foundation pit; however, it had a great influence on the ground surface settlement outside the pit.

5.3. Effect of the Steel Strut Falls Off

5.6. Analysis of Prevention and Control Measures

This paper reports on the foundation pit effect by heavy rainfall. The observed lateral displacement of the diagram wall and surface settlement were analyzed. Then, some numerical models considering different influencing factors of rainfall were established to simulate the rainfall effect. The deformation mechanism and effect factors of the rainfall process on the foundation pit were analyzed. The following conclusions can be obtained from this study: 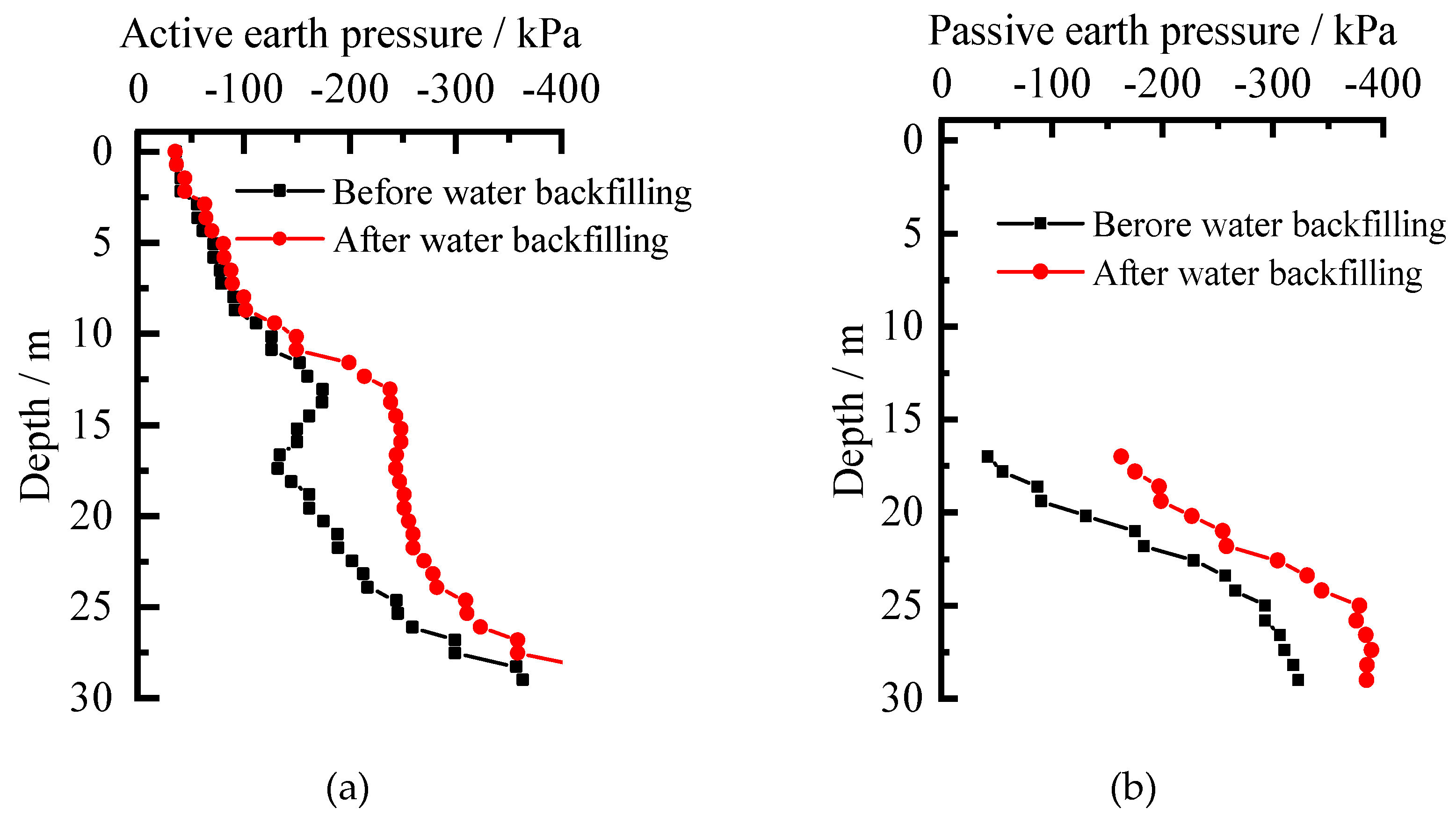 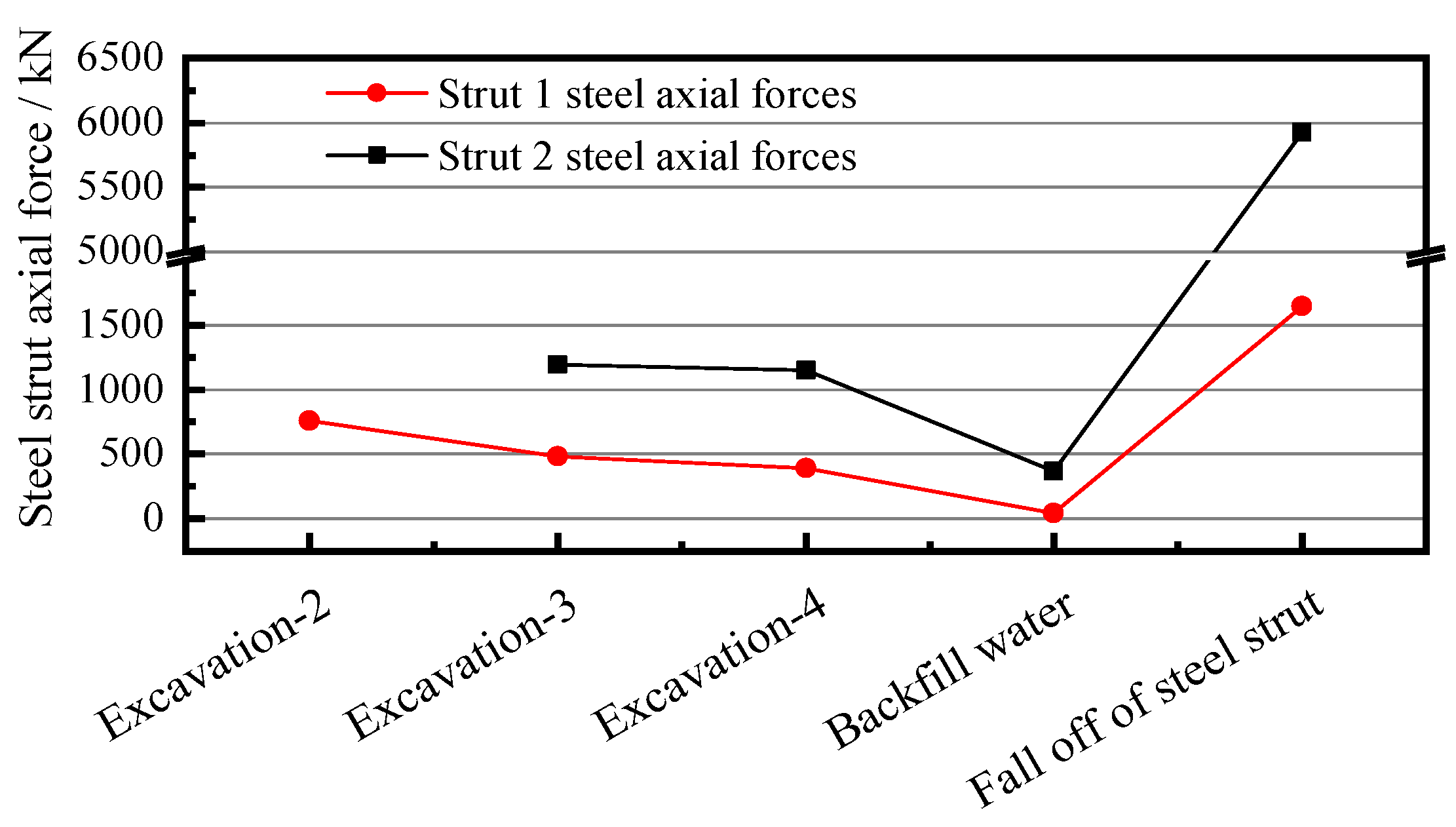