Cold areas account for 75% of the total area of China [1]. The volume of freezing pore water within the rock in cold areas is enlarged by 9% [2]. This leads to frost heaving-induced pressure (FHIP) generating inside the rock, squeezing the pore walls and gradually disappearing when the frozen water thaws. The FHIP generated in the repeated cycles of freezing and thawing triggers irreversible fatigue damage to rock [3]. In such circumstances, instability failure is likely to occur to rock under the blasting disturbance of impact loading. Hence, sufficiently exploring the dynamic mechanical properties and laws of energy dissipation for freeze–thawed rock is of significance to the design and construction of rock engineering projects in cold areas.
In the study of freeze–thaw damage, Jia et al. [4] investigated the effects of freezing rate, fracture water content and fracture depth on freezing–heaving pressure and local freezing–heaving deformation using tuff specimen containing a single fracture; Huang et al. [5] characterized the pore structure of freeze–thawed sandstone by the fractal dimension, and established the relationship between the variations in fractal dimension and strength loss; Lan et al. [6] established the porosity variation in water-saturated freeze–thawed red sandstone as a function of uniaxial compressive strength; Huang et al. [7] used a multiple linear regression method to develop a prediction model for the uniaxial compressive strength loss of freeze–thawed sandstone by considering the effect of water content saturation. Generally, as the number of freeze–thaw cycles increases, the peak strength and elastic modulus of rock under static compression decrease, while peak strain increases [8,9,10]. However, results concerning the failure strength, deformation characteristics and static compressive experiments of rock under dynamic impact loading are quite controversial [11]. Some scholars investigated mechanical properties of rock under high strain rate. Wang et al. [12] investigated the dynamic mechanical properties of coal samples under water–gas-temperature coupling, and concluded that both peak strength and breaking strain increased linearly with the increase in strain rate. Zhou et al. [13] analyzed the dynamic stress–strain curve of freeze–thawed rock, finding the compaction stage of the dynamic stress–strain curve unobvious compared to that of the static stress–strain curve. Zhao et al. [14] explored the influences of lithology, number of freeze–thaw cycles, temperature difference, strain rate and porosity on the dynamic compressive strength of freeze–thawed sandstone. The results showed that there are correlations among different parameters, among which the number of freeze–thaw cycles, strain rate and temperature difference exerted the largest influences on dynamic compressive strengths. The water environment where a rock is located is also an important factor affecting the mechanical properties of rock subjected to freeze–thaw cycling [15,16]. Weng et al. [17] studied the dynamic compressive strength of three types of freeze–thawed granite (Type 1 granite was sealed in water using preservative films, Type 2 granite was semi-immersed in water and Type 3 granite was fully immersed in water). The results indicate that the peak strength loss of granite that was semi-immersed in water is serious.
Previous research shows that the deformation process of rock is ascribed to result from the evolution of energy dissipation inside the rock [18,19,20,21,22]. This energy analysis method provides an important insight for elucidating the damage evolution of the deformation process of rock to further reveal failure mechanisms [23,24]. It is generally believed that the larger the dissipated energy or the larger the dissipated energy density, the smaller the size of the fractured rock and the more serious the damage to the rock [25,26]. Liu et al. [27] quantitatively characterized the dynamic fragmentation of freeze–thawed red sandstone by fractal dimension, and established the relationship between fractal dimension and the number of freeze–thaw cycles and impact strength. Wang et al. [28] found that water pressure can increase the energy utilization rate of coal rock subjected to coupled water static–dynamic loads. Feng et al. [29] proposed the concept of energy dissipation rate and quantitatively analyzed the energy dissipation of coal rocks in the deformation process at any arbitrary time. As freeze–thaw cycling is able to change the physical properties of rock including porosity, P-wave velocity, mass and microscopic structure, it causes the deterioration of the mechanical properties of the rock [30,31,32,33,34]. At present, there is little research on the laws of energy dissipation for freeze–thawed rock under impact loading. Therefore, this research conducted dynamic compressive experiments on rock subjected to different numbers of freeze–thaw cycles at different strain rates. The aim of this research is to reveal the influences of the number of freeze–thaw cycles and different strain rates on the dynamic mechanical properties of saturated sandstone from the perspective of energy dissipation and the fractal dimension. Furthermore, based on peak energy dissipation rate, the damage degree of freeze–thaw cycling to rock was analyzed to understand the dynamic mechanical properties of freeze–thawed sandstone.

Gray sandstone with an even texture and unobvious defects was used for specimen preparation in the experiment. The mineral composition of the rock included quartz (51.3%), feldspar (38.7%), kaolinite (7.6%) and chlorite (2.4%). Table 1 shows the basic physical and mechanical parameters of the sandstone specimens in the experiment. Specimens were prepared according to the standard of the International Society for Rock Mechanics and Rock Engineering (ISRM). The parallelization of end faces was controlled within the range of ±0.05 mm, while surface smoothness was set within ±0.02 mm. As shown in Figure 1, the height to diameter (h/d) ratio of the specimens under static loading was 2:1 (the height was 100 mm). The diameter of the Hopkinson rod (SHPB) used in the experiment was 100 mm, so specimens with a diameter of 100 mm and a height of 50 mm were adopted for cross-comparison.

The sandstone specimens that underwent freeze–thaw cycling were used in static and dynamic uniaxial compressive experiments, respectively. The static uniaxial compressive experiment was carried out on a YAG–3000KN microcomputer-controlled electro-hydraulic servo pressure testing machine. The displacement loading mode was adopted at a loading rate of 0.001 mm/s and a corresponding static strain rate of 10−5 s−1.
A split Hopkinson pressure bar (SHPB) with a diameter of 100 mm (see Figure 3) was employed to perform dynamic uniaxial compressive experiments on three groups of rocks, which were subjected to 0, 25 or 50 freeze–thaw cycles at four different strain rates. The average strain rates of the four groups were 54.3 s−1, 92.7 s−1, 117.3 s−1 and 152.0 s−1. There were 12 working conditions, and 3 parallel specimens were assigned in each working condition. To ensure the accuracy of the testing data, waveform pulse-shaping technology was adopted. The rubber sheets of 35 mm in diameter and 2 mm in thickness were pasted on the impacting surface of an incident rod. Figure 4 displays the typical waveforms of specimens. There is a good correspondence of transmitted wave and incident wave plus reflected wave, satisfying the dynamic stress equilibrium state of specimens in the loading process.
Based on the one-dimensional elastic stress wave theory and a stress heterogeneity assumption, the stress, strain and strain rate of specimens could be deduced using the equation of the three-wave method.

3.2. Law of Energy Dissipation of Freeze–Thawed Sandstone under Impact Loading

3.2.4. Analysis of Freeze–Thaw Damage to Sandstone Based on Peak Energy Dissipation Rate

In this research, static and dynamic compressive experiments at different strain rates were performed on sandstone subjected to different degrees of freeze–thaw cycling damage. The influences of the number of freeze–thaw cycles and strain rate on strength characteristics, energy dissipation rate and fractal dimension characteristics of sandstone were analyzed. A freeze–thaw damage variable used for assessing the degree of damage to freeze–thawed sandstone was established based on peak energy dissipation rate. The main conclusions are drawn as follows: 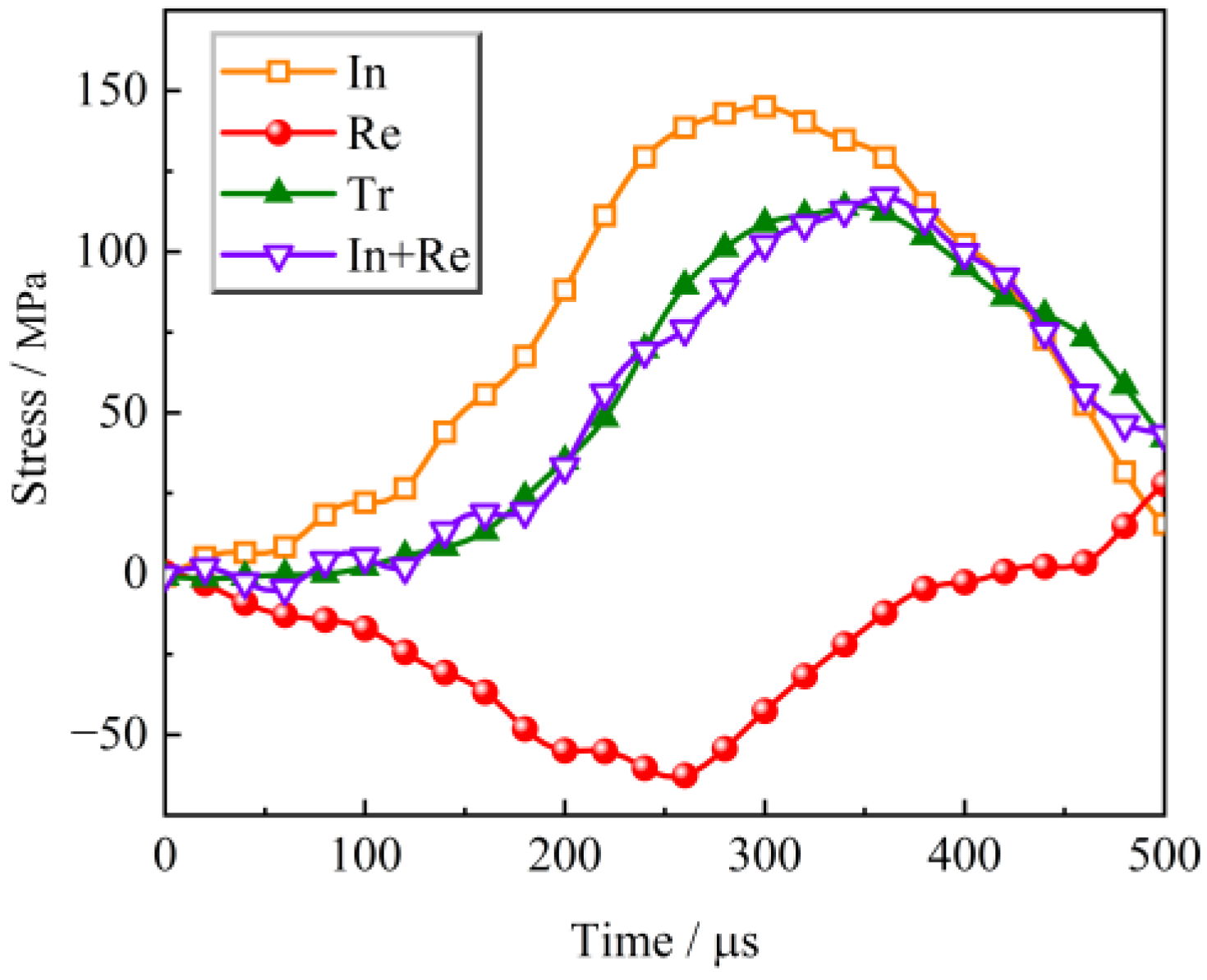 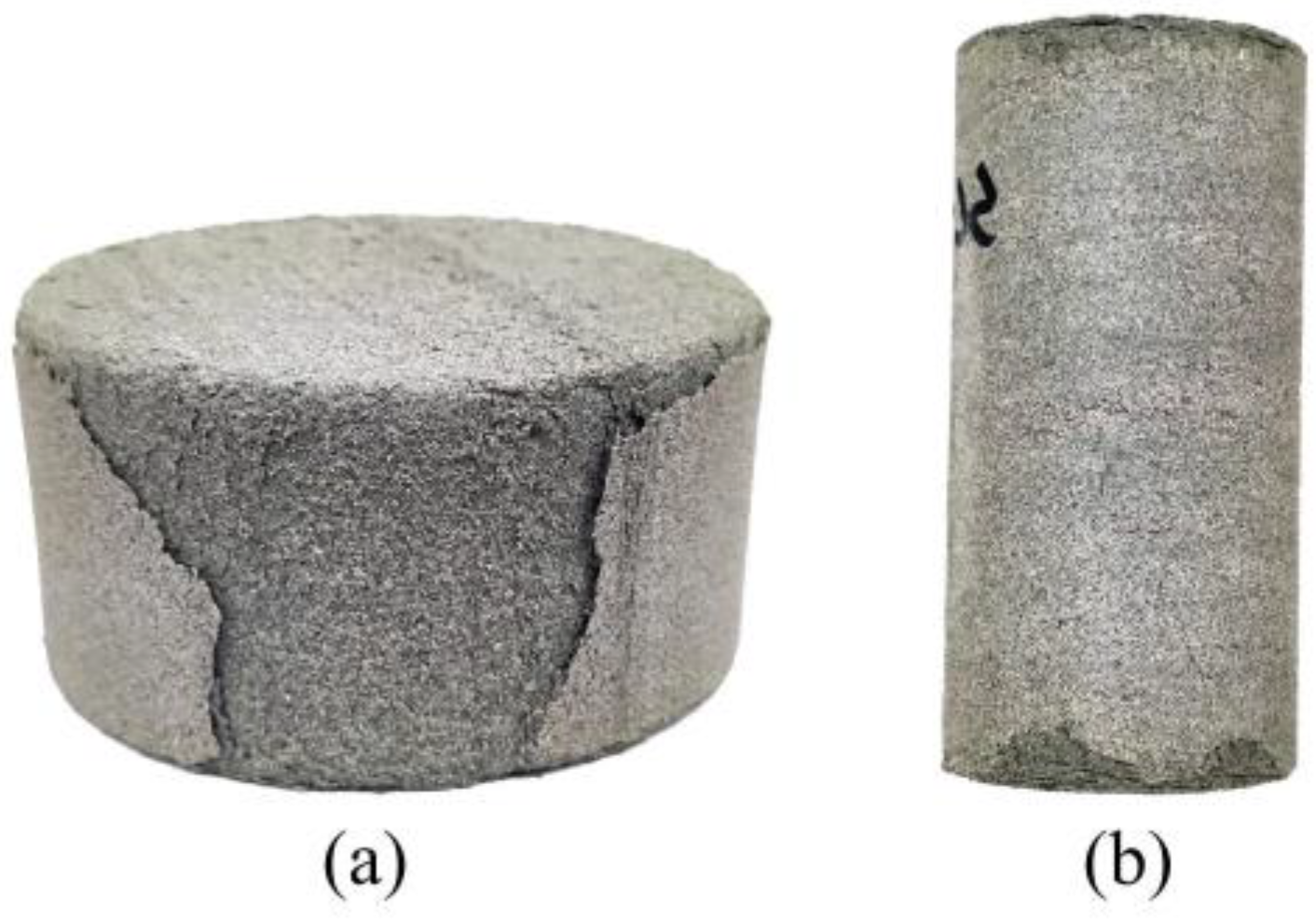 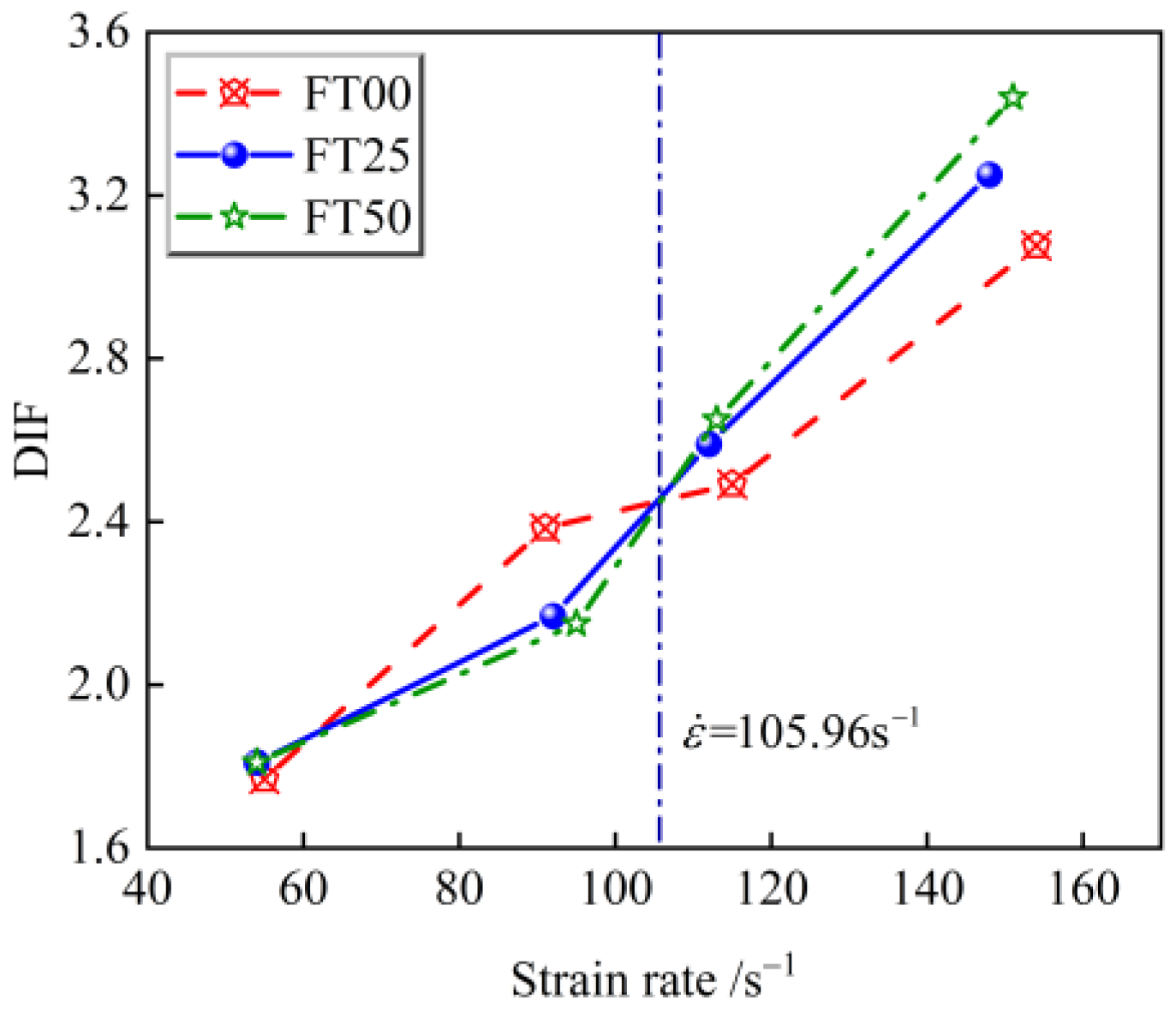 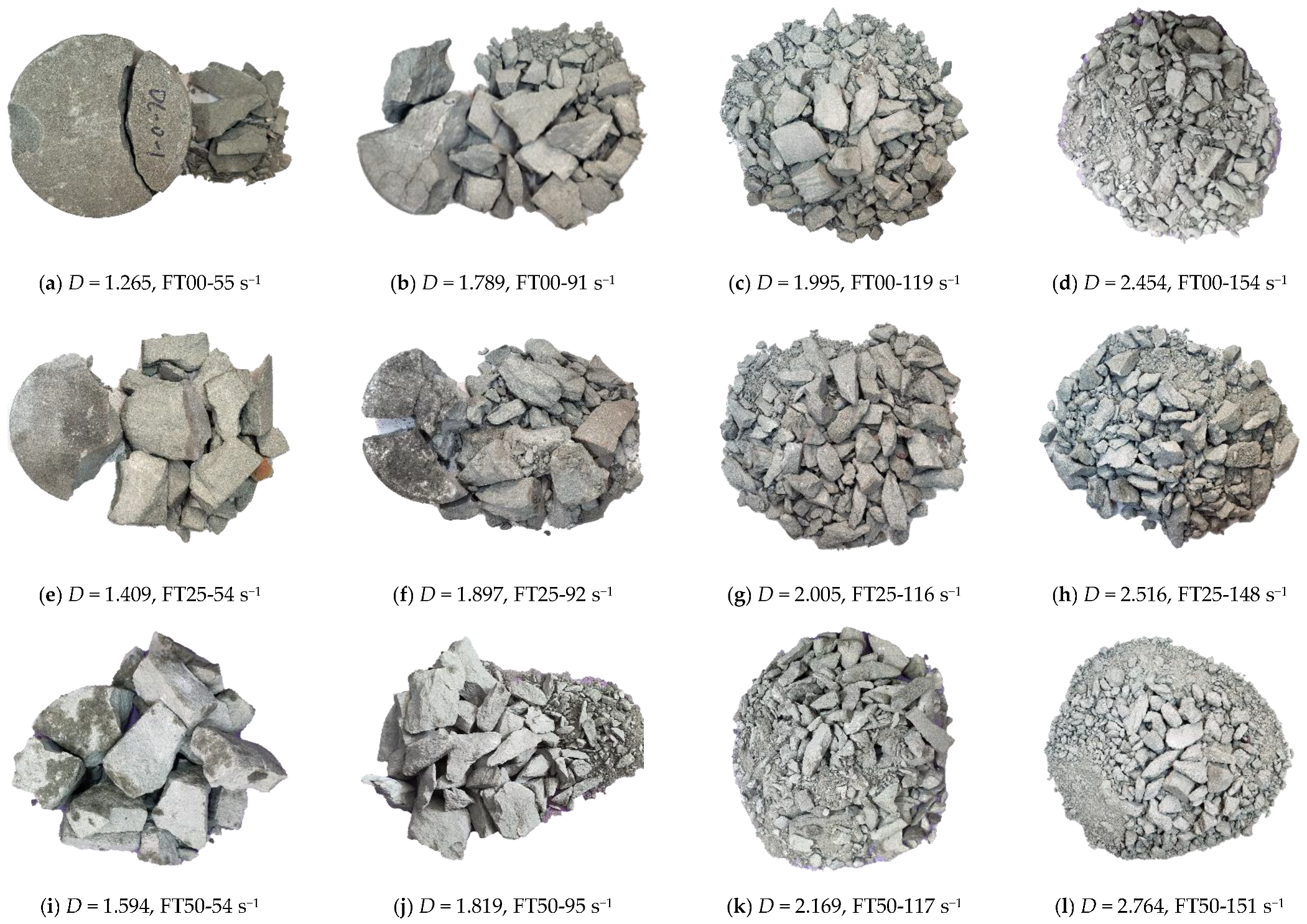 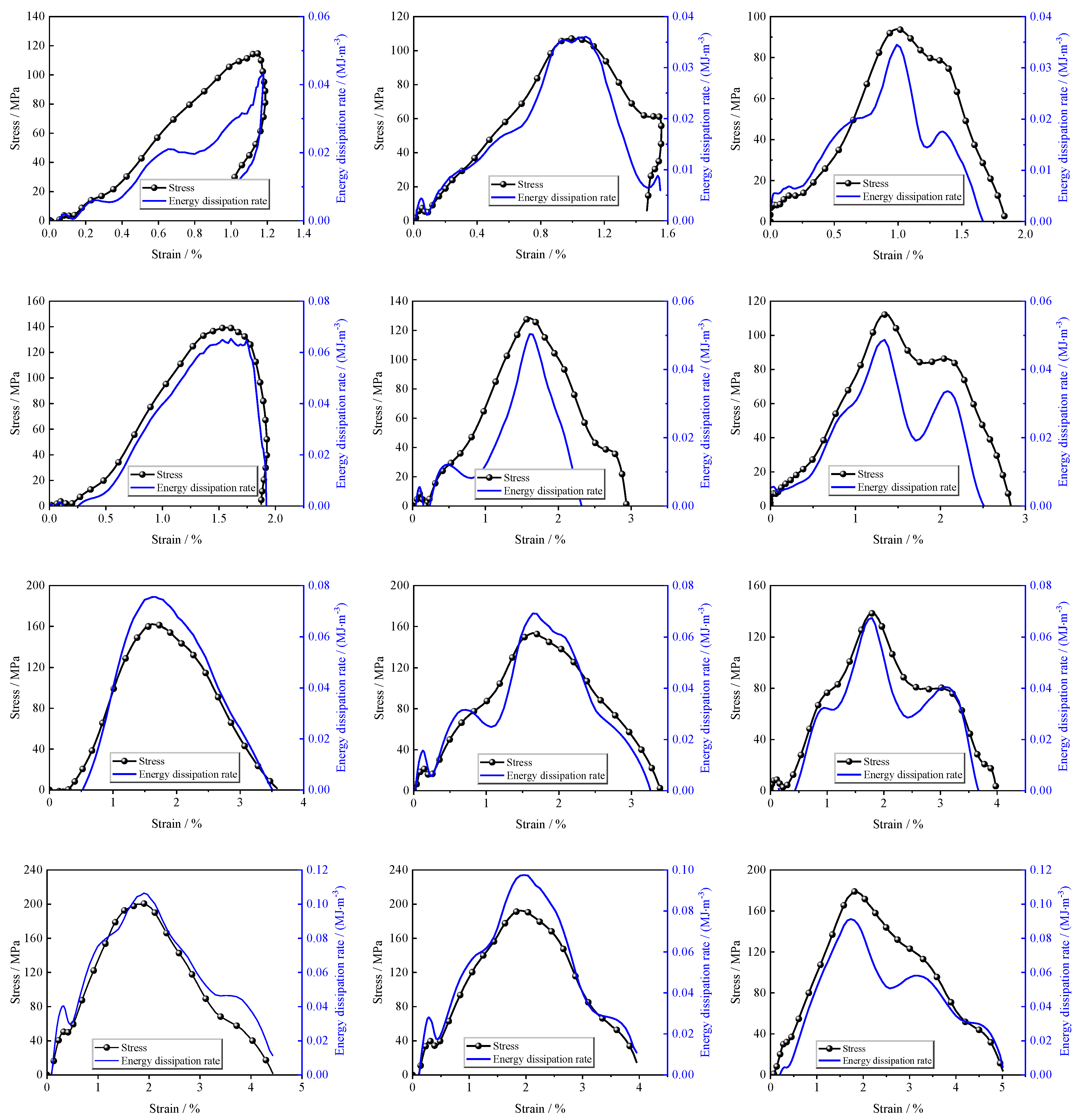 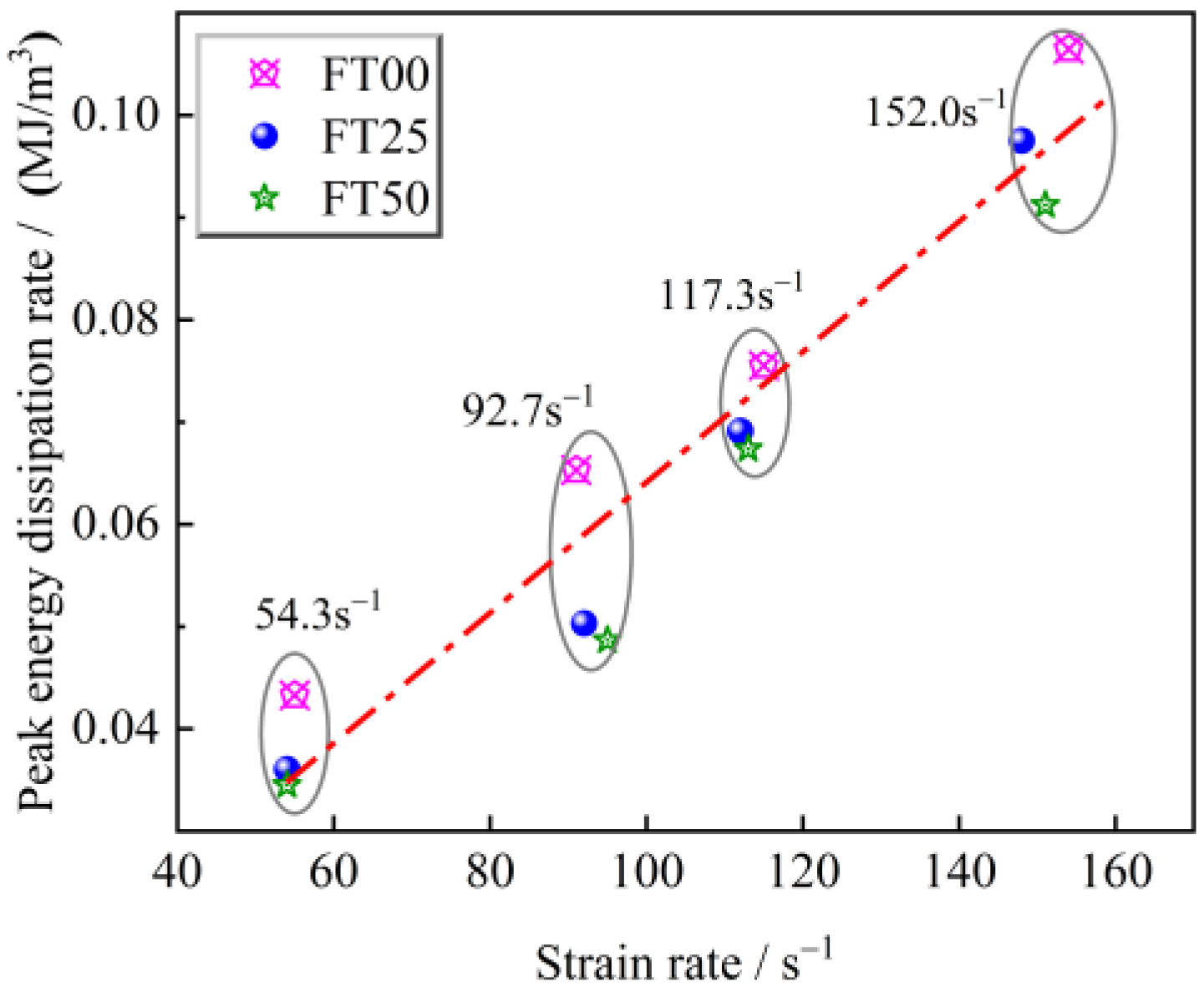