Design and Field Implementation of a Low-Cost, Open-Hardware Platform for Hydrological Monitoring

Flood hazard and risk analysis in developing countries is a difficult task due to the absence or scarce availability of flow data and digital elevation models (DEMs) with the necessary quality. Up to eight DEMs (ALOS Palsar, Aster GDEM, Bare Earth DEM, SRTM DEM, Merit DEM, TanDEM-X DEM, NASA DEM, and Copernicus DEM) of different data acquisition, spatial resolution, and data processing were used to reconstruct the January 2015 flood event. The systematic flow rate record from the Mocuba city gauge station as well as international aid organisms and field data were used to define both the return period peak flows in years for different flood frequencies (Tyear) and the January 2015 flooding event peak flow. Both visual and statistical analysis of flow depth values at control point locations give us a measure of the different hydraulic modelling performance. The results related to the Copernicus DEM, both in visual and statistical approach, show a clear improvement over the results of the other free global DEMs. Under the assumption that Copernicus DEM provides the best results, a flood hazard analysis was carried out, its results being in agreement with previous data of the effects of the January 2015 flooding event in the Mocuba District. All these results highlight the step forward that Copernicus DEM represents for flood hazard analysis in developing countries, along with the use of so-called “citizen science” in the form of flooding evidence field data acquisition. View Full-Text
Keywords: flood hazard; hydraulic modelling; global DEMs; Copernicus DEM; Mocuba city; Mozambique flood hazard; hydraulic modelling; global DEMs; Copernicus DEM; Mocuba city; Mozambique
►▼ Show Figures 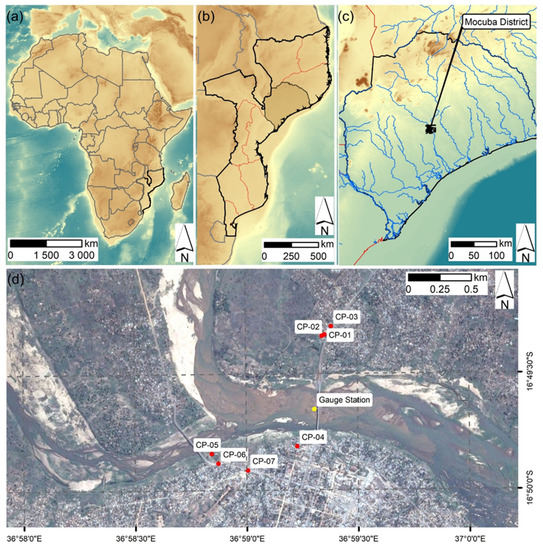