Comprehensive Assessment of Flood Hazard, Vulnerability, and Flood Risk at the Household Level in a Municipality Area: A Case Study of Nan Province, Thailand

Modeling Changes in the Composition of River Water with Discharged Wastewater: A Case Study in NW Russia

The technogenic impact of the development of the Lomonosov diamond deposit is associated with the discharge of quarry and drainage water into the river, which has a special conservation status. Earlier studies on the composition of bottom sediments showed that there are signs of increased accumulation of heavy metals and radionuclides at wastewater discharge sites. The purpose of this work was to predict changes in the composition of surface water and bottom sediment in the river during the further development of mining operations with brackish and salty water captured by drainage systems, the presence of which was established in the zone of their future influence. For this, a simulation of changes in the composition of the water in the river was carried out using the GEOCHEQ software package by minimizing the free energy of the system using a convex simplex algorithm. It was found that the maximum salinity of surface water can reach 1.51 g/L. In this case, the MPC of Cl−, Na+, SO42−, Mg2+, Sr, V, and U can be exceeded for fishery watercourses. The genetic basis of the accumulation of these components in solutions for mixing was considered. According to the calculations, when about 5000 m3/h of drainage water is discharge d into the river, the mass of precipitated chemical elements will be 56–191 t/h, including up to 2.1 t/h of iron; therefore, accumulation in the discharge zone must be controlled. View Full-Text
Keywords: quarry waters; wastewater; river waters; bottom sediments; modeling quarry waters; wastewater; river waters; bottom sediments; modeling
►▼ Show Figures 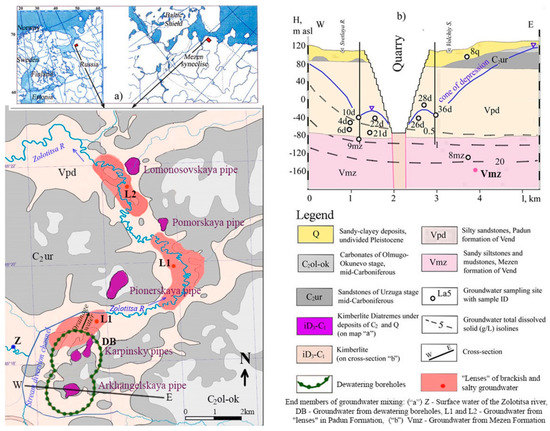 Alexander I. Malov
Russian geologist and scientific researcher. Doctor in Geology. Director of the Institute of Geodynamics and Geology, FCIAR RAS. Interests: geochemical and isotopic tracers in hydrogeological, geological and geoecological studies; interactions between water and geological and chemical environment; quantitative understanding of chemically based processes in hydrogeochemical environments; equilibria of geochemical reactions; freshwater-seawater interactions in coastal aquifers; radiogenic and stable isotope geochemistry; and groundwater dating.
Zoom | Orient | As Lines | As Sticks | As Cartoon | As Surface | Previous Scene | Next Scene
We use cookies on our website to ensure you get the best experience. Read more about our cookies here.
Accept
We have just recently launched a new version of our website. Help us to further improve by taking part in this short 5 minute survey here. here.
Never show this again