An Assessment of Water Supply Governance in Armed Conflict Areas of Rakhine State, Myanmar
Next Article in Special Issue

Is Investment Contributing to Competitiveness in Nautical Tourism in the Atlantic Area?
Previous Article in Journal

The Role of the Andalusian Institute for Agrarian Reform (IARA) in Irrigation Expansion: The Case of the Chanza Irrigation Project (Huelva, Spain)

In the last two decades of the 20th century, irrigation in Andalusia experienced a historic expansion as a result of the transfer of political powers from the State to regional authorities and, thanks to its application in Andalusia, to pass, among other measures, an agrarian reform bill and the subsequent development of new irrigation infrastructures. Against this background, our objective was to determine the role of the body responsible for implementing agrarian reform, i.e., the Institute for Agrarian Reform (Instituto Andaluz de Reforma Agraria, IARA), by converting drylands into irrigation lands, with a special focus on one of the region’s most vibrant agro-economically transformed areas: the irrigable area of the River Chanza (the west coast of the province of Huelva). To conduct the study, we have applied the historical method and content analysis to technical, legal and agro-statistical documentation from the entire active period of the IARA (1984–2011). The results highlight the leading role played by the IARA in extending irrigation land in agrarian-reform priority areas, as well as in developing irrigation infrastructures in the areas that the State defined as strategic in Andalusia, such as the 17,200 hectares of irrigated land of the Chanza Irrigation Project. We conclude that the radical agro-productive transformation of the coast of Huelva in recent decades is mainly due to the availability of water for irrigation, which the IARA was primarily responsible for planning and executing. View Full-Text
Keywords: IARA; agrarian reforms; irrigation schemes; water; agricultural landscapes IARA; agrarian reforms; irrigation schemes; water; agricultural landscapes
►▼ Show Figures 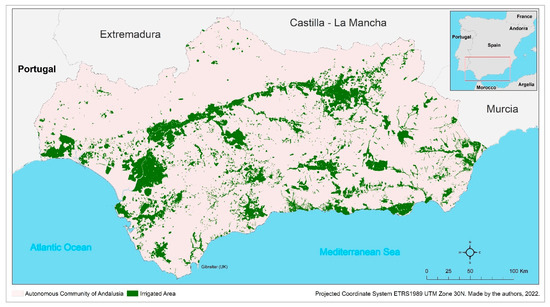