Species Richness and Diversity of Aquatic Ecosystems: Lessons from a Special Issue
Previous Article in Journal

Non-indigenous species may pose a threat to native ecosystems worldwide. In aquatic environments, invasives may have a negative impact on human food security and livelihoods. Several water fleas (Crustacea: Branchiopoda: Cladocera) are notorious invasive alien species influencing large freshwater lake systems and even inland seas. In the current review, we discuss the state of knowledge regarding non-indigenous species in the Cladocera and their invasiveness potential in different continents. We argue that the potential impacts and occurrence of cladoceran exotics may be higher than generally assumed. We critically review 79 cases from literature sources, involving 61 cladoceran taxa where records outside of their natural distribution ranges were previously interpreted as invasions. We assessed the probability of natural range expansions versus human-mediated introductions and we discuss several major corridors of invasion. We estimate human-mediated transportations for at least 43 taxa (out of 61; ca 70%), while other cases can be seen as natural expansions of their distribution ranges (not necessarily/not likely human-mediated) and/or taxonomical confusion. We confirm non-indigenous presence in recipient regions for at least 41 cladoceran taxa, of which several are true invasives (i.e., with negative impacts on native ecosystems). The majority are zooplankters with effects on pelagic freshwater ecosystems, yet we also report on introductions by littoral taxa. We argue that cryptic introductions of cladocerans are taking place on a global scale, yet they remain under the radar. We highlight several striking case studies, such as the Ponto–Caspian onychopods that have invaded the Baltic Sea and the Laurentian Great Lakes, and several clones of the anomopod genera Daphnia and Bosmina that have successfully colonised new environments, causing equilibria shifts in native aquatic worlds. At the same time, we dispel some myths about taxa that were misconstrued as invasive in certain localities. Based on our review, the first of its kind for freshwater zooplankton, future environmental monitoring tools including molecular techniques and detailed surveys with rigorous and critical taxonomical assessments may help to provide a clearer picture on the extent of invasiveness of cladocerans. View Full-Text
Keywords: non-indigenous species; water fleas; Cladocera; freshwater ecosystems; invasive alien species non-indigenous species; water fleas; Cladocera; freshwater ecosystems; invasive alien species
►▼ Show Figures 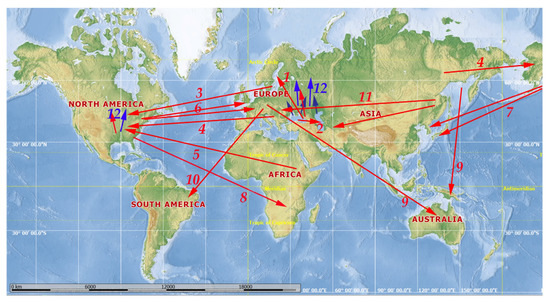