In this study, two cities, namely Osaka and Nagoya Cities in Japan, were selected as the study area. The location and detailed information of the target cities in Japan are shown in Figure 1 and Table 1. These cities were selected because their urbanised areas cover more than 90% of the city area, while they have differences in urban population, urban area population, and other factors related to the urban scale of the cities, and therefore, they are suitable for this study to compare characteristics of urban pluvial flooding areas due to differences in an urban scale. Furthermore, there were relatively more urban pluvial flooding area records than in other cities, and it was thought that more reliable analysis results could be obtained (in detail, see Section 2.2). In addition, the amount of capital expenditure on sewerage projects in each city was large, and it was considered that cities with larger investments in sewerage projects were more likely to have experienced more urban pluvial flooding in the past (Table 1).
The annual maximum one-hour rainfall data as short-time extreme rainfall causing urban pluvial flooding in the study area for 20 years during 1993–2012 in Osaka and Nagoya Cities are shown in Table 2. One-hour precipitation data from JMA AMeDAS stations (Osaka: 34°40.9′ N, 135°31.1′ E; Nagoya: 35°10.0′ N, 136°57.9′ E) were used [19]. The average annual maximum one-hour rainfall was 33.2 mm in Osaka City and 39.4 mm in Nagoya City, respectively. Above-average annual maximum one-hour rainfalls were recorded seven times in Osaka and nine times in Nagoya, with no bias towards increased annual maximum one-hour rainfall through the 20-year period 1993–2012.

Referring to Djamres et al. (2021) [14], the topographical factors of each mesh in the target city were quantified. The topographical factors used were “Elevation”, “Slope”, “Depth of concave”, “Capacity of concave”, “Catchment area”, “Slope of upstream”, “Slope of downstream”, “Difference of slope”, “Flow length of upstream”, “Flow length of downstream”, and “Difference of flow length”. The method used to create each topographical factor is shown in Table 3. In this study, the 5 m mesh digital elevation model (DEM) provided by the Geospatial Information Authority of Japan (2013) [20] was used as the elevation data. This digital elevation model is produced based on Lidar data.

2.3.2. Visualisation of the Topographical Characteristics of Urban Pluvial Flooding

This research was partly funded by the Nomura Foundation for Membrane Structure Technology and the Obayashi Foundation, and the APC was funded by the Masaki Sawamoto Research Publication Grant.

This research was supported by CSIS Joint Research No. 1123, University of Tokyo. The urban pluvial flooding area record was provided by the River Planning Division, Water Management and Land Conservation Bureau, Ministry of Land, Infrastructure and Transport. The authors would like to express their gratitude. 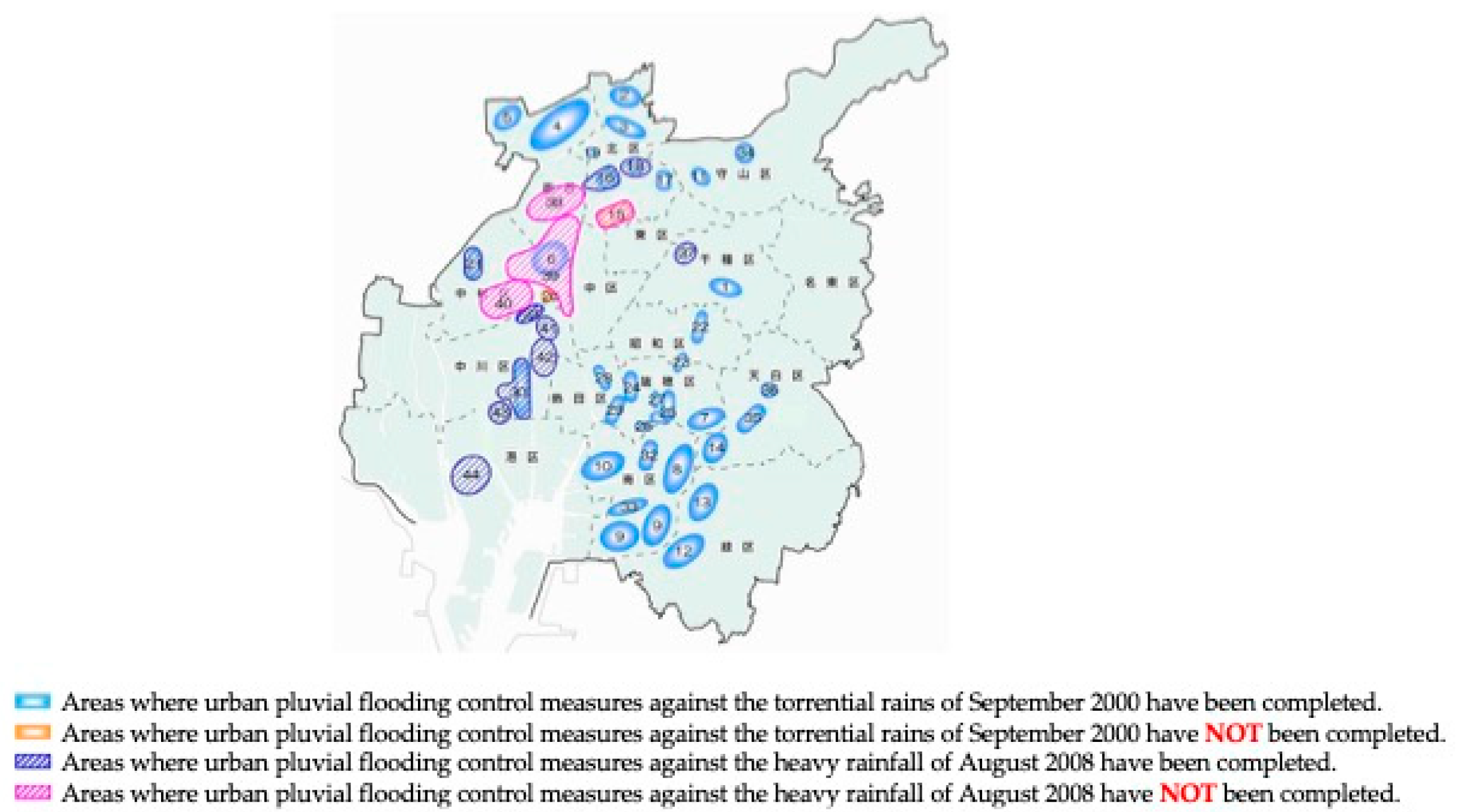