Eukaryotic Diversity Based on High-Throughput 18S rRNA Sequencing and Its Relationship with Environmental Factors in a Salt Lake in Tibet, China

Protecting endangered plant species is crucial to maintaining biodiversity. Currently, there is a rapid decline in the populations of many moisture-loving plant species throughout Poland. These include the entire genus Drosera, so this paper attempts to determine the main reasons for the decline of Drosera intermedia and Drosera anglica in the Łęczna-Włodawa Lake District. For this purpose, the habitat conditions, climatic factors of the sites, as well as the vegetation of their current and historically abundant occurrence were compared, and it was shown that an important reason for the receding of sundews may be changes associated with rising temperatures in the study area. In the case of Drosera anglica, a clear preference was observed for colonising sites associated with the shoreline of lakes, more hydrated and almost devoid of companion plants. For Droseraintermedia, on the other hand, it was revealed that it acclimatises to mid-forest peatlands, rich in magnesium, nitrogen, phosphorus, and manganese, with moderate carbon content, medium levels of groundwater and air temperature, and low concentrations of organic matter. In addition, it was noted that sundew sites are characterised by lower diversity indices but a greater number of rare and protected species and significantly lower concentrations of iron and potassium. View Full-Text
Keywords: Drosera intermedia; Drosera anglica; environmental factors; conservation actions; wetland Drosera intermedia; Drosera anglica; environmental factors; conservation actions; wetland
►▼ Show Figures 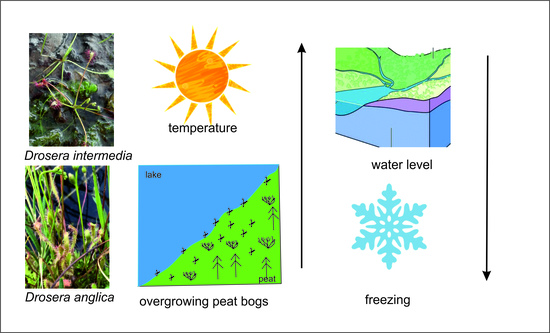