Spatial Distribution of Cladocera in a Stratified Palaearctic Lake

:
The spatial distribution of 39 species of Chydoridae, representing seven families, was examined in a stratified Palaearctic lake in Poland (Lake Piaseczno). Thirty-one of the species living in that lake were found to exist exclusively in the littoral zone. No species were found exclusively in the pelagic zone; in this zone, eight species were identified, but all of these were also quite abundant in the littoral zone. Almost all species of Chydoridae and all species of Macrothricidae were found only in littoral, whereas Daphnidae and Sididae families comprised species either restricted to the littoral or occurring in both pelagic and littoral zones. Two Bosminidae species, in turn, displayed quite a consistent distribution in both biotic zones, but differed in their habitat preferences. On the other hand, species of Polyphemidae and Leptodoridae exhibited littoral and littoral-pelagic distributions, respectively. Few species occurred in one habitat only. Most species, despite showing clear preferences for a distinct habitat (or habitats), were also present at lower densities throughout the littoral zone, or the whole lake, in the case of limnetic species. Archetype analysis showed that cladocerans were distributed along the entire gradient of macrophyte characteristics and habitat depth. Among Chydoridae, which displayed the strongest attachment to habitats overgrown by macrophytes, few species showed above 50% similarity to the archetype representing species living among submerged macrophytes with the highest plant per volume infested. Furthermore, many littoral species, including these of the Macrothricidae family, P. pediculus and S. mucronata, avoided staying in habitats with particularly complicated spatial architecture. Regarding their distribution in relation to depth, cladocerans could be grouped into species found in the whole littoral zone, species settling in relatively shallow parts of the littoral zone, species found mainly in habitats 3–6 m deep and species settling throughout the lake. Archetype analysis showed negligible similarity between cladocerans and the archetype representing species living in macrophyte-free habitats in the deepest parts of the lake. The study provides quantitative support showing that cladocerans display a distribution threshold at one time in one lake. Although this group of aquatic invertebrates is widely suspected of being ecologically flexible and tolerant to environmental gradients, individual species showed high spatial segregation according to depth and habitat architecture.
Keywords:
deep lake; habitat; depth; macrophytes; littoral; pelagic zone

Field and Laboratory Analyses. The study was conducted in the mesotrophic Lake Piaseczno (51°23′03″ N, 23°01′46″ E), situated in eastern Poland. The lake area is 83.2 ha and its maximum depth reaches 38.8 m. The littoral zone reaches a depth of 6 m due to high water transparency and the pelagic zone exhibits a vertical temperature stratification. Samples were collected once a month from April to November in different habitats located along two transects (Figure 1), placed in the lake’s eastern and north-western parts, which were similar in depth and vegetation structure and stretched from the shore to the deepest part of the lake. In the littoral zone, five different habitats were distinguished: the near shore, overgrown by the common reed Phragmites australis (hereinafter NS); the near littoral, i.e., a macrophyte-free region with a sandy bottom (NL); the deep littoral, overgrown by water milfoil Myriophyllum alterniflorum (DL1) and macroalga Nitella flexilis (DL2); and the sublittoral, where the bottom is characterized by separate clusters of moss Drepanocladus sp. (Su). In each habitat, the number of samples collected increased with depth (Table 1). In the pelagic zone, the samples were taken in a non-stratified manner near the pelagial (NP) and in a stratified manner in the deep pelagial (DP). Similar to the case of the littoral zone, samples in the pelagial were collected from different depths in the water column (Table 1). Cladocerans were collected around noon using a 5 L sampler. Double samples, 10 dm3 in volume each, were sieved through a 40 µm mesh net and preserved with 5% buffered formalin treated with 5% glycerin. The cladocerans were classified to the species level and counted (ind.·dm−3) under a microscope at 100× magnification with the use of a Sedgewick-Rafter counting cell. A permutational multivariate analysis of variance using distance matrices was applied to test the statistical significance of the differences in the spatial variability of cladocerans. The differences in the densities of cladocerans were insignificant between the transects, thus the numerical data of density presented in this paper are the mean values for the two transects. To estimate the spatial architecture of the habitats, investigations of the macrophytes were carried out in April, May, June, August and October. Macrophyte density was expressed as plant per volume infested (PVI), calculated as the product of per cent coverage and height divided by water depth [10]. These data were subsequently used to estimate the impact of habitat traits on the distribution of Cladocera.
The influence of habitat traits on spatial distribution of Cladocera. The habitat traits examined were described using different types of variables: continuous (habitat depth, PVI for submerged macrophytes) and categorical (biological zone, macrophyte occurrence and macrophyte type). For each analysis, 2–6 modalities were created within each trait (Table S1 in Supplementary material), and each species was included in only one modality per trait based on its highest relative density. In order to identify the distribution of cladocerans, archetypal analysis was used [11]. This analysis was chosen because it represents observations in a multivariate data set as convex combinations of extreme points. As a result, it gives a simple and useful way of looking at multivariate data. In this analysis, each species of Cladocera was represented in a data set as a mixture of ‘individuals of pure type’ or ‘archetypes’. These are a small number of (not necessarily observed) extreme points in a set of multivariate observations and the data are expressed as a probabilistic mixture of archetypes [5,6]. In this study, continuous traits were scaled, to ensure equal weights. The values of the archetypes were determined by running the algorithm for k = 1, n + 1, by performing iterations and by calculating the residual sum of squares (RSS) for each one [6]. A small value of k with a low RSS was chosen, according to the ‘elbow criterion’. The R library ‘archetypes’ was used for this analysis [12].

In total, 39 species of cladocerans were found. The majority—24 species—represented the Chydoridae family, while five species belonged to the Daphnidae family and four to the Macrothricidae family. The Bosminidae and Sididae families were represented by two species each and the Leptodoridae and Polyphemidae families by one species each.

The spatial structure and the depth of habitats proved to be significant factors influencing the distribution of cladocerans in both the littoral and the pelagic zones. Inter- and intra-lake differences in these traits, observed in the biotic zones of deep stratified lakes, are frequently ignored in field studies on the distribution of aquatic biota. Nevertheless, this study suggests that variations in the diversity and the abundance of cladocerans should be considered at small spatial scales in such lakes. Otherwise, we cannot fully ascertain the species structure in both the littoral and the pelagic zones, this often being falsely perceived as quite homogeneous in stratified lakes. 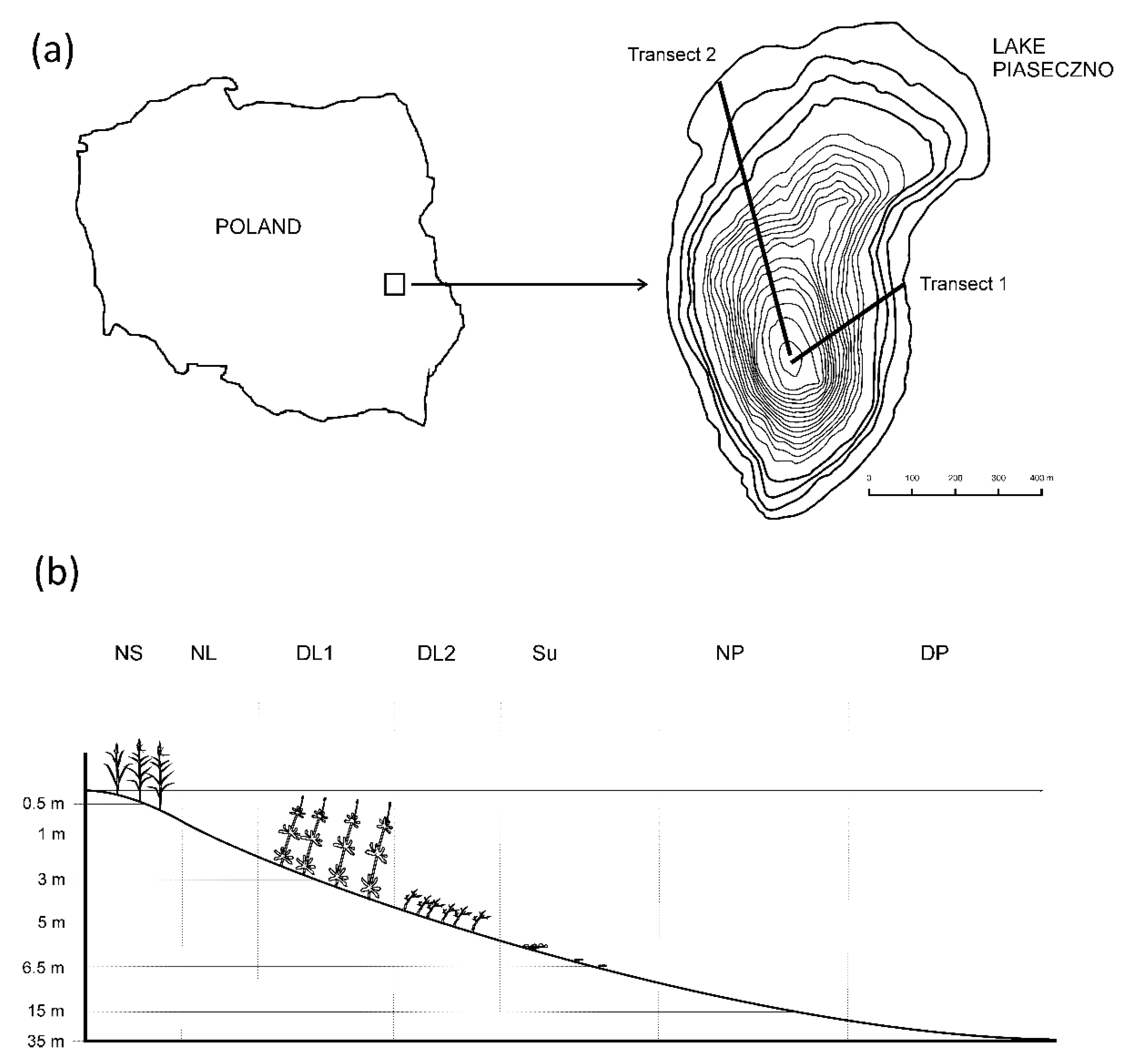