Ongoing climatic changes are influencing the volume and composition of the river waters that enter the Arctic Basin. This hydrochemical study was conducted within the mouth of the Ob River, which is one of the world’s largest rivers, providing 15% of the Arctic Ocean’s total intake. Concentrations of suspended and dissolved elements were determined using ICP–MS and ICP–AES. As compared to the world average values, the Ob river water had higher concentrations of dissolved P, As, Cu, Zn, Pb and Sb, i.e., the elements that form soluble organo-mineral complexes. The composition of suspended matter was characterized by low concentrations of most trace elements (Cd, Cr, Co, Cu, Mo, Al, Ni, Pb, V) due to their low contents in peat soils within the river drainage basin. Concentrations of dissolved forms were many times lower than concentrations of suspended forms in Al, Fe, Mn, Zn, Cr, Co, Ti, Sc, and all rare earth elements. Total concentrations of Ni, Cu, Bi, Pb, W in the river water increased by 2.5 to 4.2 times during the summer. The effects of climate change, which can cause an increase in the discharge of solid particles from thawing permafrost, are likely to lead to an increase in the discharge of certain elements into the Ob River estuary. View Full-Text
Keywords: Arctic basin; stream runoff; trace elements; total suspended matter; dissolved elements; bottom sediments Arctic basin; stream runoff; trace elements; total suspended matter; dissolved elements; bottom sediments
►▼ Show Figures 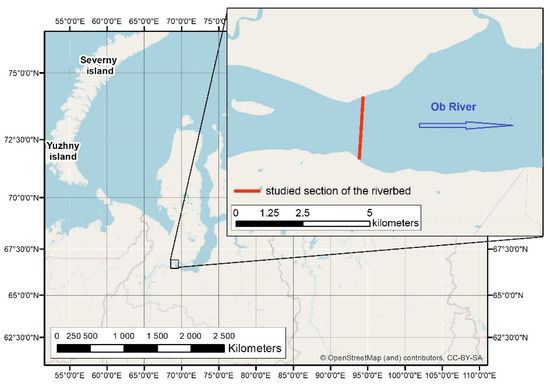