To reveal the water and heat transfer characteristics of the orchard soil under water storage pit irrigation and to regulate the distribution of soil water and heat for improving apple quality and increasing yield, a 3D soil water and heat transfer model of orchards under water storage pit irrigation was established. The model not only considered the influences of root water uptake, precipitation, evaporation, and irrigation, but also simulated the infiltration process of the variable water head in the pit according to the principle of mass conservation and introduced the pit coefficient to simulate the difference in radiation in the pit to describe the influence of the pit on the model. Verify and analyze the simulation results. Results showed that the variation trend of simulated soil moisture and heat was consistent with that of measured data. The mean absolute percentage error, root mean square error, and mean absolute deviation were 3.23%, 0.9460, and 0.6984 for soil temperature and 10.05%, 0.0269, and 0.0214 for water content after irrigation, respectively. The simulation results have high accuracy and show that the soil moisture content centers on the pit with an ellipsoid distribution and tends to be uniform over time. The soil temperature was higher in the 4–5 cm area near the soil surface and the wall of pit, and it remarkably changed with time. The intraday variation of soil temperature was mainly affected by atmospheric temperature, but a certain lag was observed compared with the change of atmospheric temperature. With the increase of the irrigation amount, the distribution range of soil moisture content and water high value area increased, while the average and maximum soil temperature decreased. With the increase of irrigation water temperature to 18–24 h after irrigation, the soil temperature in the ellipsoidal area around the pit remarkably increased. The model established in this paper can be used to simulate the hydrothermal status of the soil in the field under water storage pit irrigation. The results prove that the water storage pit irrigation can effectively improve the hydrothermal status of the middle-deep soil and promote the root system of fruit trees to absorb water. View Full-Text
Keywords: water storage pit irrigation; hydrothermal coupling; finite element method; numerical simulation water storage pit irrigation; hydrothermal coupling; finite element method; numerical simulation
►▼ Show Figures 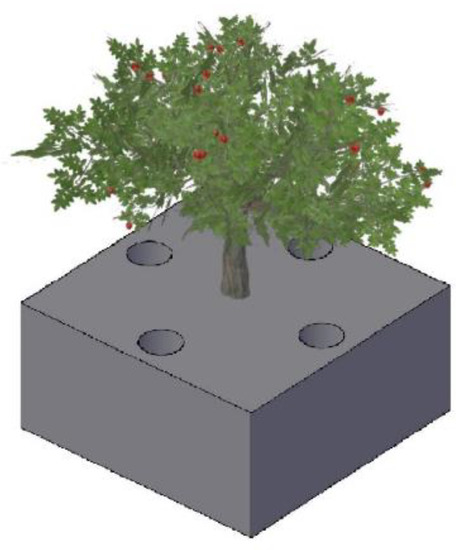