Responses of Different Submerged Macrophytes to the Application of Lanthanum-Modified Bentonite (LMB): A Mesocosm Study

Lanthanum-modified bentonite (LMB) has remarkable efficacy on eutrophication control, but the reduced bioavailable phosphorus and formed anaerobic horizon from LMB may be harmful to submerged macrophytes. We conducted this study to explore the influence of LMB on Hydrilla verticillata and Vallisneria natans in mixed-species plantings. The concentrations of TP, TDP, SRP, and TDN in the LMB treatments were lower than the Control, but the Chl a concentration in the HLMB treatment (850 g m−2) was higher than the Control by 63%. There were no differences of V. natans growth among the treatments. For H. verticillata, its biomass, RGR, height, branch number, root number, and length in the LLMB treatment (425 g m−2) were lower than the Control by 48%, 22%, 13%, 34%, 33%, and 8%, respectively. In addition, the biomass of H. verticillata was 62%, the RGR was 32%, the height was 19%, the branch number was 52%, the root length was 40%, and the root number was 54% lower in the HLMB treatment than those in the Control. In summary, LMB had negative effects on submerged macrophytes with underdeveloped roots. Submerged macrophytes with more developed roots are preferred when using combined biological–chemical methods for water restoration. View Full-Text
Keywords: subtropical lakes; restoration; Phoslock®; Hydrilla verticillata; Vallisneria natans; interspecific competition subtropical lakes; restoration; Phoslock®; Hydrilla verticillata; Vallisneria natans; interspecific competition
►▼ Show Figures 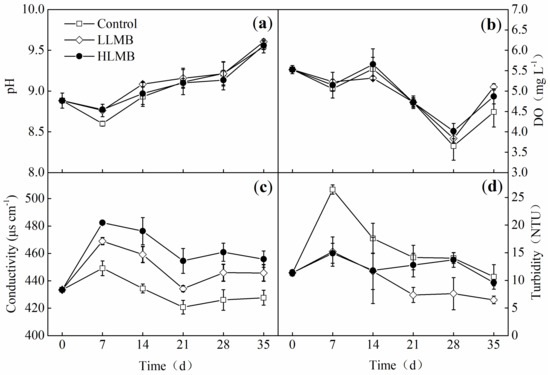