Rainwater Management in Urban Areas
Next Article in Special Issue

In this study palladium-nickel (Pd-Ni) nanoparticles supported on carbon and cerium oxide (Pd-Ni/AC-CeO2) were synthesized by a transfer phase method and characterized by scanning electronic microscopy (SEM), X-ray diffraction (XRD), and energy-dispersive X-ray spectroscopy (EDX). The XRD and SEM data concluded the presence of alloy formation between Pd and Ni. The synthesized particles were used as an adsorbent for removal of azo dye acid orange-8 (AO-8) from water and were found to be effective in removal (over 90% removal efficiency) of the selected dye. Different kinetics and equilibrium models were applied to calculate the adsorption parameters. The most suitable model that best fitted the equilibrium data was the Langmuir model and maximum adsorption capacities were 666.6, 714 and 769 mg/g at 293, 313 and 333 K, respectively, with R2 values closed to 1 while in the case of the kinetics data the best fit was obtained with a pseudo-second order kinetics model with a high R2 value. Furthermore, the adsorption thermodynamics parameters such as free energy, enthalpy, and entropy were calculated and the adsorption process was to found be exothermic with a value of ΔH° (−7.593 kJ mol−1), spontaneous as ΔG° values were negative (−18.7327, −19.4870, and −20.584 kJ/mol at 293, 313 and 333 K, respectively). A positive entropy change ΔS° with a value of 0.0384 kJ /mol K indicates increased disorder at the solid–solution interface during the adsorption process. An attempt was made to recycle the Pd-Ni/AC-CeO2 with suitable solvents and the recycled adsorbent was reused for 6 cycles with AO-8 removal efficiency up to 80%. Based on findings of the study, the synthesized adsorbent could effectively be used for the removal of other pollutants from wastewater, however, further studies are needed to prove the mechanisms. View Full-Text
Keywords: nanoparticles; synthesized; transfer phase method; temperatures; solutions nanoparticles; synthesized; transfer phase method; temperatures; solutions
►▼ Show Figures 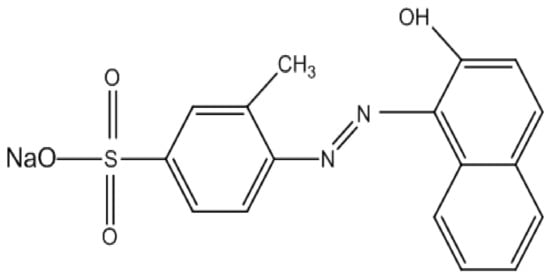