Evidence of Phosphate Mining and Agriculture Influence on Concentrations, Forms, and Ratios of Nitrogen and Phosphorus in a Florida River

Florida has a long history of phosphate-mining, but less is known about how mining affects nutrient exports to coastal waters. Here, we investigated the transport of inorganic and organic forms of nitrogen (N) and phosphorus (P) over 23 sampling events during a wet season (June–September) in primary tributaries and mainstem of Alafia River that drains into the Tampa Bay Estuary. Results showed that a tributary draining the largest phosphate-mining area (South Prong) had less flashy peaks, and nutrients were more evenly exported relative to an adjacent tributary (North Prong), highlighting the effectiveness of the mining reclamation on stream hydrology. Tributaries draining > 10% phosphate-mining area had significantly higher specific conductance (SC), pH, dissolved reactive P (DRP), and total P (TP) than tributaries without phosphate-mining. Further, mean SC, pH, and particulate reactive P were positively correlated with the percent phosphate-mining area. As phosphate-mining occurred in the upper part of the watershed, the SC, pH, DRP, and TP concentrations increased downstream along the mainstem. For example, the upper watershed contributed 91% of TP compared to 59% water discharge to the Alafia River. In contrast to P, the highest concentrations of total N (TN), especially nitrate + nitrite (NOx–N) occurred in agricultural tributaries, where the mean NOx–N was positively correlated with the percent agricultural land. Dissolved organic N was dominant in all streamwaters and showed minor variability across sites. As a result of N depletion and P enrichment, the phosphate-mining tributaries had significantly lower molar ratios of TN:TP and NOx–N:DRP than other tributaries. Bi-weekly monitoring data showed consistent increases in SC and DRP and a decrease in NOx–N at the South Prong tributary (highest phosphate-mining area) throughout the wet season, and different responses of dissolved inorganic nutrients (negative) and particulate nutrients (positive) to water discharge. We conclude that (1) watersheds with active and reclaimed phosphate-mining and agriculture lands are important sources of streamwater P and N, respectively, and (2) elevated P inputs from the phosphate-mining areas altered the N:P ratios in streamwaters of the Alafia River. View Full-Text
Keywords: phosphate-mining; mine reclamation; agriculture; nitrogen; phosphorus; Alafia River; Florida phosphate-mining; mine reclamation; agriculture; nitrogen; phosphorus; Alafia River; Florida
►▼ Show Figures 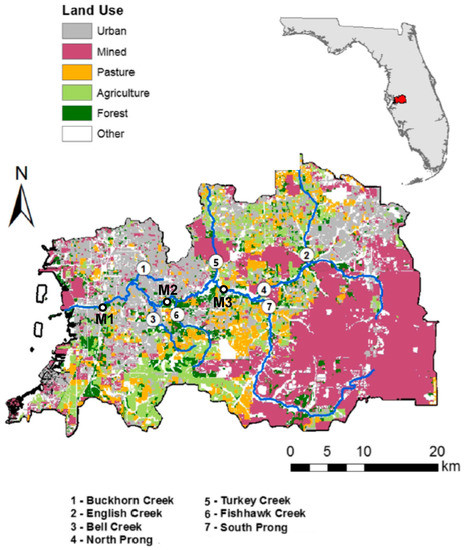