India’s Commitments to Increase Tree and Forest Cover: Consequences for Water Supply and Agriculture Production within the Central Indian Highlands

Water Appropriation on the Agricultural Frontier in Western Bahia and Its Contribution to Streamflow Reduction: Revisiting the Debate in the Brazilian Cerrado

Over the last three decades, almost half of the Brazilian tropical savanna (Cerrado biome) has been converted into cropland and planted pastures. This study aims to understand the implications of the expansion of the agricultural frontier for water resources in western Bahia state. We use an interdisciplinary approach that combines quantitative and qualitative data (spatial and hydrological analysis, interviews) to tie together land use changes in the Corrente basin, the streamflow and precipitation time series in the Pratudão River sub-basin (part of the Corrente basin), and the perceptions of soybean farmers and smallholder communities about the transformations of the hydrological cycle over the last few years. We observed an almost 10-fold increase in agricultural surface area in the Corrente River basin over the last three decades (1986–2018), going on from 57,090 ha to 565,084 ha, while center-pivot irrigated areas increased from 240 ha to 43,631 ha. Over this period, the streamflow has reduced by 38% in the Pratudão River. Our hydrological analyses, based on the Mann-Kendall test, of seven fluviometric stations and 14 pluviometry stations showed a statistically significant streamflow trend in the Pratudão River sub-basin for both minimum and mean streamflow series (p ≤0.05). Surface runoff coefficient, which relates streamflow and precipitation annual data coefficient, decreased from around 0.4 in the late 1990s to less than 0.2 in 2015. In addition, most precipitation time series analysis (number of annual rainy days) showed no statistically significant trend (p > 0.05). Our results indicate that agricultural changes rather than climate change may be the main driver of downward streamflow trends in the Pratudão River sub-basin that is part of Corrente River basin. View Full-Text
Keywords: hydrology analysis; agribusiness; smallholder communities; water appropriation; western Bahia; Corrente River basin; Brazilian Cerrado hydrology analysis; agribusiness; smallholder communities; water appropriation; western Bahia; Corrente River basin; Brazilian Cerrado
►▼ Show Figures 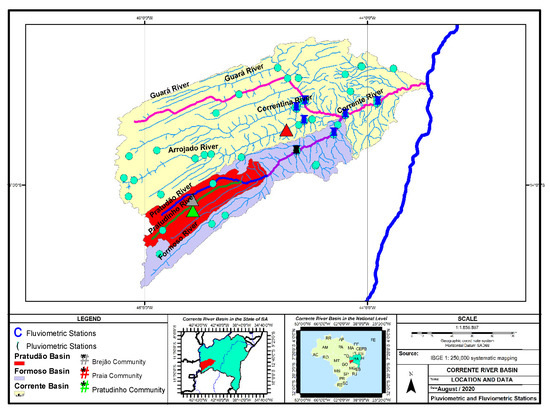