Cadmium is one of the most hazardous metals in the environment, even when present at very low concentrations. This study reports the systematic development of Kenaf fiber biochar as an adsorbent for the removal of cadmium (Cd) (II) ions from water. The adsorbent development was aided by an optimization tool. Activated biochar was prepared using the physicochemical activation method, consisting of pre-impregnation with NaOH and nitrogen (N2) pyrolysis. The influence of the preparation parameters—namely, chemical impregnation (NaOH: KF), pyrolysis temperature, and pyrolysis time on biochar yield, removal rate, and the adsorption capacity of Cd (II) ions—was investigated. From the experimental data, some quadratic correlation models were developed according to the central composite design. All models demonstrated a good fit with the experimental data. The experimental results revealed that the pyrolysis temperature and heating time were the main factors that affected the yield of biochar and had a positive effect on the Cd (II) ions’ removal rate and adsorption capacity. The impregnation ratio also showed a positive effect on the specific surface area of the biochar, removal rate, and adsorption capacity of cadmium, with a negligible effect on the biochar yield. The optimal biochar-based adsorbent was obtained under the following conditions: 550 °C of pyrolysis temperature, 180 min of heating time, and a 1:1 NaOH impregnation ratio. The optimum adsorbent showed 28.60% biochar yield, 69.82% Cd (II) ions removal, 23.48 mg/g of adsorption capacity, and 160.44 m2/g of biochar-specific area. View Full-Text
Keywords: biochar; cadmium; optimization; adsorption; kenaf fiber; CCD-RSM biochar; cadmium; optimization; adsorption; kenaf fiber; CCD-RSM
►▼ Show Figures 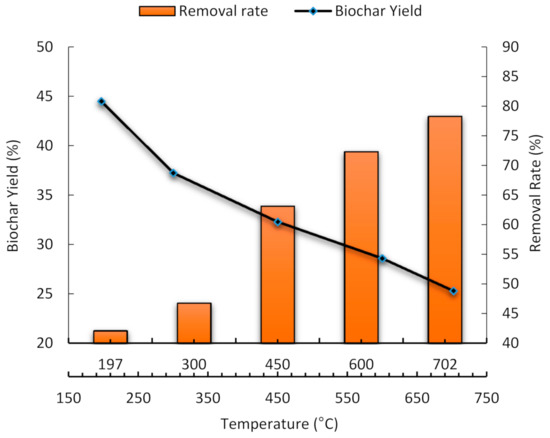