Grasslands are one of the most common biomes in the world with a wide range of ecosystem services. Nevertheless, quantitative data on the change in nitrogen dynamics in extensively managed temperate grasslands caused by a shift from energy- to water-limited climatic conditions have not yet been reported. In this study, we experimentally studied this shift by translocating undisturbed soil monoliths from an energy-limited site (Rollesbroich) to a water-limited site (Selhausen). The soil monoliths were contained in weighable lysimeters and monitored for their water and nitrogen balance in the period between 2012 and 2018. At the water-limited site (Selhausen), annual plant nitrogen uptake decreased due to water stress compared to the energy-limited site (Rollesbroich), while nitrogen uptake was higher at the beginning of the growing period. Possibly because of this lower plant uptake, the lysimeters at the water-limited site showed an increased inorganic nitrogen concentration in the soil solution, indicating a higher net mineralization rate. The N2O gas emissions and nitrogen leaching remained low at both sites. Our findings suggest that in the short term, fertilizer should consequently be applied early in the growing period to increase nitrogen uptake and decrease nitrogen losses. Moreover, a shift from energy-limited to water-limited conditions will have a limited effect on gaseous nitrogen emissions and nitrate concentrations in the groundwater in the grassland type of this study because higher nitrogen concentrations are (over-) compensated by lower leaching rates. View Full-Text
Keywords: nitrogen cycle; weighable lysimeter; nitrate leaching; nitrous oxide emission; plant nitrogen uptake; extensive managed temperate grassland; Budyko nitrogen cycle; weighable lysimeter; nitrate leaching; nitrous oxide emission; plant nitrogen uptake; extensive managed temperate grassland; Budyko
►▼ Show Figures 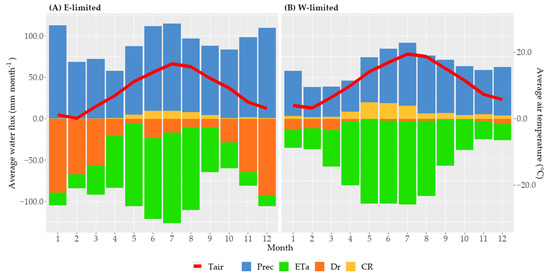