Landslide is a common mountain hazard, which is widely distributed in the steep mountain gorge area [1,2]; it often has the characteristics of high location, high speed, long distance of movement [3]. In particular, the frequency of large-scale landslides is higher under the action of heavy rainfall or high-intensity earthquake [1]. When there are rivers in the direction of landslide movement, the landslide is easy to accumulate into the river and form a dam to block up the upstream water level. Once a dam failure occurs, it will also cause a huge flood disaster in the downstream and enlarge the scope and scale of the hazard [2,4,5,6,7,8,9,10,11]. For example, in 1786, a strong M = 7.75 earthquake in Luding-Kangding area, Sichuan Province, southwestern China, formed a landslide dam and the flood caused by the landslide dam failure killed more than 100,000 people [12]. In addition, Yigong Landslide dammed lake (9 April 2000) [13], Tangjiashan landslide dammed lake (12 May 2008) [14] and Baige landslide dammed lake (10 October 2018 and 3 November 2018) [15] occurred in recent years, which caused serious life and property losses of upstream reservoir inundation and downstream extraordinary outburst flood.
Landslide dam is a kind of natural earth rock dam without special design and specific spillway. Its geometry, material composition and internal structure are significantly different from those of artificial earth rock dam [16] and its failure probability is much higher than that of artificial earth rock dam [17,18,19]. According to statistical data [19], the service life of landslide dams ranges from a few minutes to thousands of years, with 87%, 83%, 71%, 51% and 34% of them less than one year, half a year, one month, one week and one day, respectively. Most of the cases (91%) were overtopping and only a few landslide dams were piping failure (8%) and slope instability. This kind of “short life, multiple overtopping failure” nature creates the high risk of a landslide dam, which is closely related to the shape, material composition, internal structure, main river shape and hydraulic characteristics of a landslide dam [2,8,10,19]. Therefore, the failure mechanism of landslide dams has become an important scientific problem.
Several numerical models of overtopping dam break based on physical processes have been proposed, such as DAMBRK model [20], BREACH model [21], BEED model [22], BRES model [23], Tingsanchali and Chinnarasri’s model [24], HR-BREACH [25], SIMBA model [26,27], Wang and Bowles’s model [28], BRES-Zhu model [29], Faeh’s model [30], Wu and Wang’s model [31] and Gradual dam breaches model [32]. However, the above model is almost for artificial earth rock dam and it is difficult to be applied to landslide dam with complex natures. In addition, Zhong et al. [8] established a water soil coupling mathematical model to simulate the overtopping failure process of Tangjiashan dam. Chang and Zhang [33] proposed a landslide dam overtopping failure model based on physical process to simulate the effect of soil erodibility changing with depth on the erosion process. Shen et al. [2] considered not only the change of soil erodibility with depth, but also the erosion mode (unilateral dam failure and bilateral dam failure) and different material composition of landslide dam. Cao et al. [34] also established a two-dimensional model of landslide dam failure based on the traditional shallow water dynamic equation. Even so, the computational efficiency is greatly reduced and the reliability of the results is low due to the difficulties in obtaining the parameters required by the model, controlling the boundary conditions and over simplification of the model. Therefore, a rapid dam failure risk assessment method is needed.
As one of the most important parameters in the process of dam failure, the peak discharge of dam failure often determines the downstream disaster degree and the reliability of its prediction results determines the accuracy and effectiveness of disaster prevention and mitigation measures [35]. The simulation of flood peak discharge has been studied as early as the 1980s. At present, a large number of simulation models have emerged, such as Kirkpatrick’s model [36], Macdonald and Langridge-Monopolis’ model [37], Singh and Snorrason’s model [38], Costa’s model [39], Costa and Schuster’s model [17], Froehlich’s model [40], Webby’s model [41], Walder and O’Connor’s model [42], Pierce et al. model [43], Peng and Zhang’s model [19] and Hakimzadeh et al. model [44]. Among them, most of the models are only applicable to earth rock dams and most of the formulas are single independent variables, so the calculation results are uncertain and the existing models do not consider the impact of the breach shape on the peak discharge. In addition, because the breach flow is a strong unsteady flow when the dam failure, the upstream water level is complex and difficult to describe quantitatively, the height of water level drop (d) and the potential energy of the water body in the process of dam break (PE) is difficult to be measured, so the formula containing this parameter still has strong limitations. In fact, the breach shape determines the cross-section area of the outburst flood; the dam erodibility determines the duration of the outburst flood [45,46], so these two parameters still have an important impact on the peak discharge of the dam break flood.
The purpose of this study is to solve the shortcomings of the existing researches, such as the low simulation accuracy of the peak discharge of landslide dam failure and the incomplete consideration of the parameters. According to 67 groups of historical landslide dam failure cases with relatively complete data, the calculation model of the peak discharge of landslide dam failure is constructed on the basis of considering the final breach shape, dam body shape, dam erodibility and reservoir capacity and compared with the existing models. The Baige dammed lake (98°41′52.15″ E, 31°4′54.91″ N) outburst event in 2018 is used to further verify it. The model can provide reference for disaster prevention and mitigation of landslide dam failure.

Based on the extensive collection of relevant literature, this paper obtains 67 groups of historical landslide dam failure data all over the world (Appendix A Table A1), including 45 groups of historical landslide dam failure data summarized in Peng et al. [19]. In Table A1, dam erodibility indicates the resistance of dam materials to the erosion action of water flow. Briaud (2008) [47] proposed six erosion categories (very high, high, medium, low, very low and non-erosive) according to erosion rate and breach velocity or flow shear stress. The higher the dam erodibility is, the greater the peak discharge is. However, the data of erosion rate, velocity and shear stress cannot be obtained before the dam break. Therefore, this paper refers to Zhang et al. (2019) [9] and Cui et al. (2008) [48] and divides the dam erodibility into three categories (high, medium, low) according to the particle composition of the landslide dam. The classification criteria are: when the landslide dam is dominated by large stones, it is low erodibility (L); when the landslide dam is dominated by soil, it is high erodibility (H); when the landslide dam contains a large number of stones and soil, it is medium erodibility (M). The meanings of other parameters are shown in Figure 1.

On 10 October 2018 and 3 November 2010, a large-scale landslide occurred in Baige (98°41′52.15″ E, 31°4′54.91″ N) within the boundaries of Jiangda County in Tibet and Baiyu County in Sichuan Province, blocking the main stream of Jinsha River and forming a barrier lake (Figure 3). After that, overtopping failure occurred (Figure 4), causing serious threat and loss to the upstream and downstream affected areas. Zhang et al. [9] investigated the two dam failure events of Baige landslide and obtained detailed dam failure data (Table 4).
This study model and models in Table 2 are used to simulate the peak discharge of two landslide dams. The simulated results are shown in Table 5. It can be seen from Table 5 that the simulated values of the peak discharge of this study model and Peng et al. [19] are more reasonable, but the simulated effect of this study model is still significantly better than that of Peng et al. [19], while there is a large gap between the simulated results of other models and the measured peak discharge, especially for the landslide dam failure event on 3 November, the simulated relative error is more than 90%.
In addition, there are already some empirical simple models and physical or numerical complex models in landslide dam-failure [2,8,10,15,18,21,24,33,39,50,52,53,54,55], while our proposed model is halfway, representing a promising compromise that needs to be further tested to new case studies.

(1)
The calculated model for peak discharge of landslide dam failure is proposed, which can consider the dam erodibility, the final shape of the breach, the shape of the dam, the lake volume and other parameters at the same time.
(2)
Compared with other models, the calculated peak discharge of this model are more close to measured peak discharge. In addition, the model needs 12 parameters to calculate the breach depth, breach bottom width, breach top width and breach peak discharge, whereas the model proposed by Peng et al. needs 17 parameters.
(3)
The model proposed in this paper is used to simulate the peak discharge of two dam failure events of Baige landslide in Jinsha River (10 October 2018 and 3 November 2018). The relative error of peak discharge simulation of the two events is 0.73% and 6.68%, respectively, which is obviously better than other models, indicating that the simulated effect of the model is reasonable.

Finally, new cases of landslide dam failure should be added in the future study to further modify the model. This study can provide an important theoretical reference for disaster prevention and mitigation of landslide dam.

The study did not involve humans or animals.

The study did not involve humans.

The study did not report any data. All data used in the study are from Table A1. 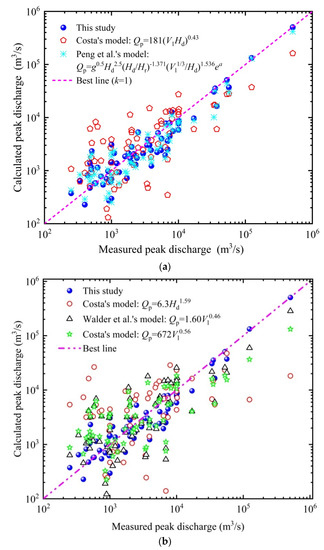 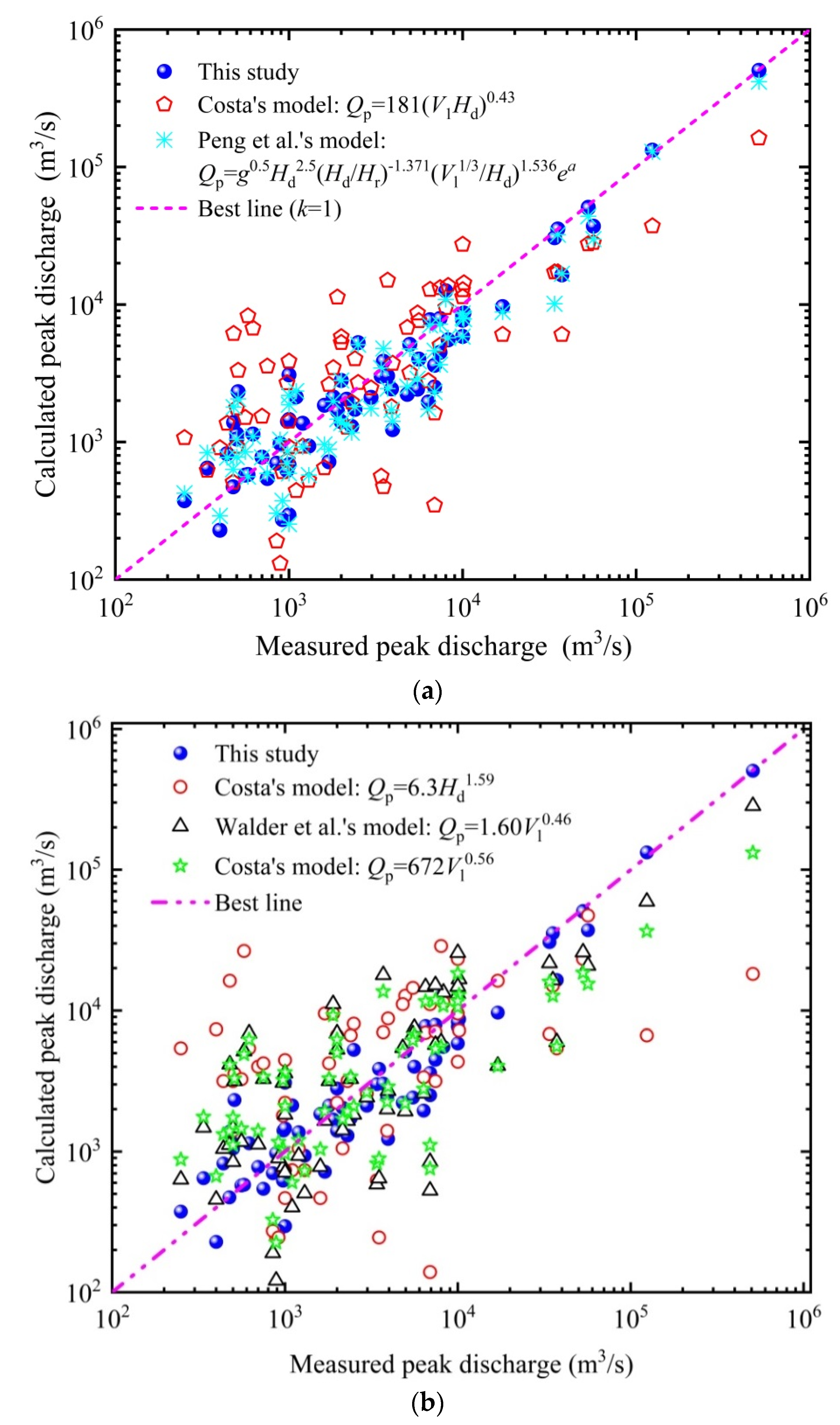 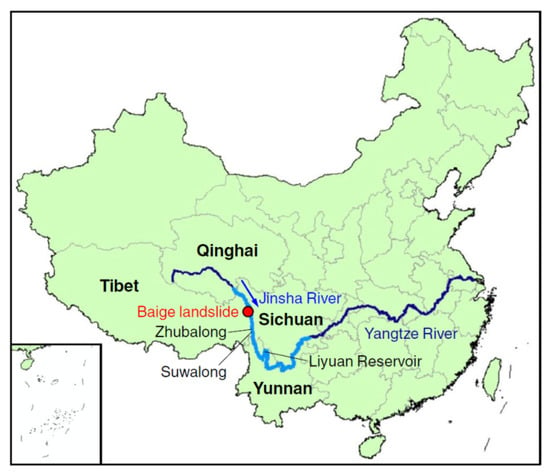 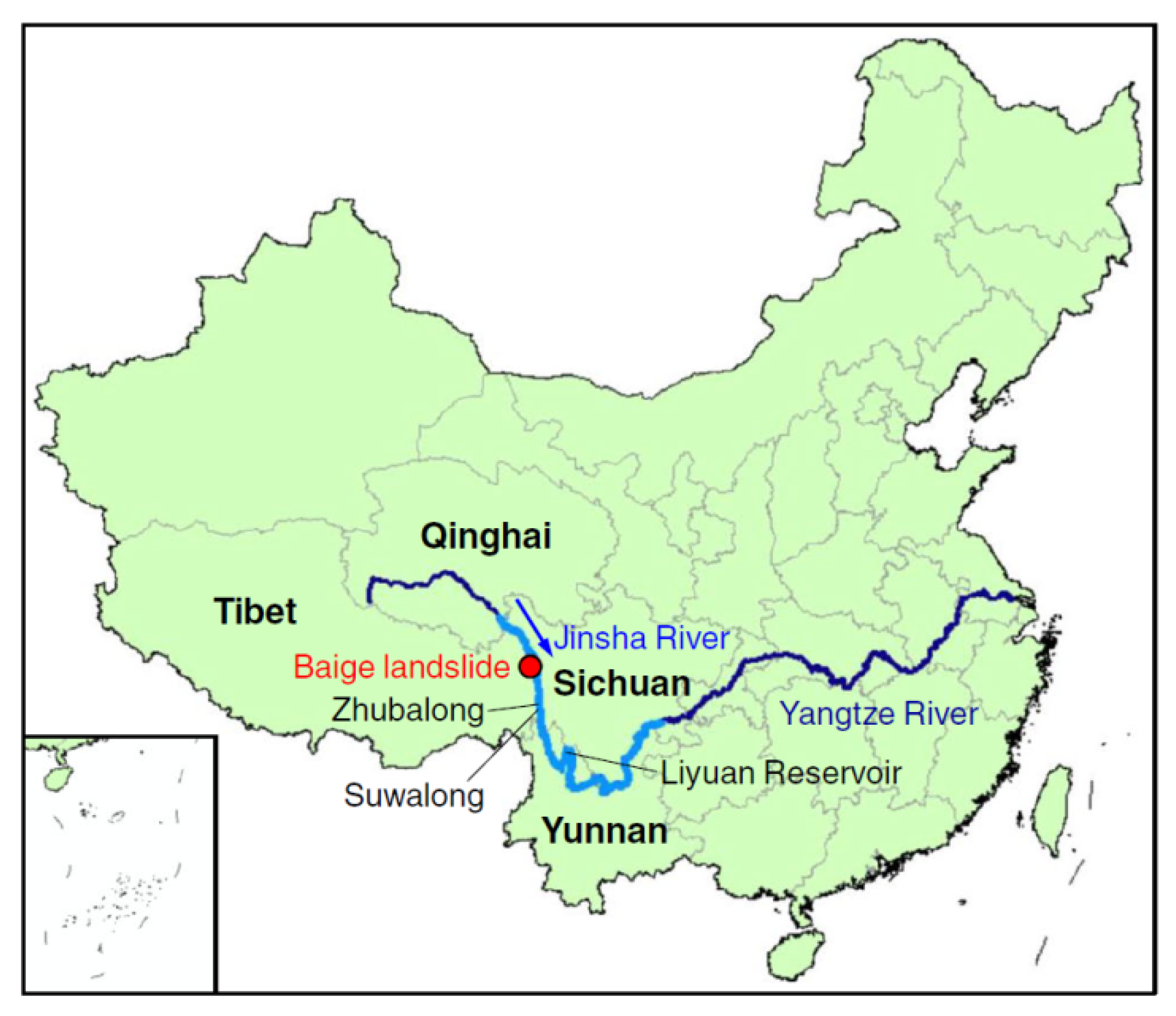