How Organization Models Impact the Governing of Industrial Symbiosis in Public Wastewater Management. An Explorative Study in Sweden
Next Article in Special Issue

Variation of Diatoms at Different Scales in the Brazilian Pantanal Basin

(1) Background: We analyzed the diatom community structure of the surface sediments, in three permanent ponds in the Pantanal of Mato Grosso, Brazil, to better understand how biota in these aquatic environments depend on structural connectivity and functional connectivity: (2) Methods: Ten samples sites were established in each pond, water and the sediment were taken during the flood period. Abiotic–biotic variables were determined and standardized; (3) Results: The three ponds presented acidic water and high concentration of nitrogen, with the highest acidity for Ferradura Pond (P1) and the highest trophic status index for Burro Pond (P2), but the greatest environmental variations occurred in Caracará Pond (P3). The variation in diversity between sites in the same pond is what contributes the most to gamma diversity. The most abundant species was Aulacoseiraitalica (Ehrenberg) Simonsen and the genus Eunotia Ehrenberg was the most representative in species. Ferradura Pond, there was a relationship between compositional and environmental dissimilarities with geographic distance, but there was no independent. Burro Pond, the relationship the compositional variation with environmental variables was not significant. Caracará Pond, there was a relationship of compositional dissimilarity both with geographical distance and with environmental; (4) Conclusions: The set of results suggests that the mechanisms that determine the metacommunity of each pond are different and that the environmental conditions and dispersion influenced the structure and composition. Since, diatom species were different between ponds, and ponds more eutrophic showed less diversity. The pH and oligotrophy were the main factors to maintain the greatest diversity of species of the genus Eunotia and the greatest abundance of Aulacoseira italica. Knowing the dynamics and structure of diatoms, which are at the beginning of the food chain, is essential for conserving, maintaining, or rehabilitating wetland ecosystems, such as the Pantanal, which is part La Plata river basin, which represents the second largest surface for water resources in South America and the Guarani Aquifer System, the biggest unified groundwater aquifer in the world. View Full-Text
Keywords: connectivity; diatom; environmental structure; metacommunity; surface sediments connectivity; diatom; environmental structure; metacommunity; surface sediments
►▼ Show Figures 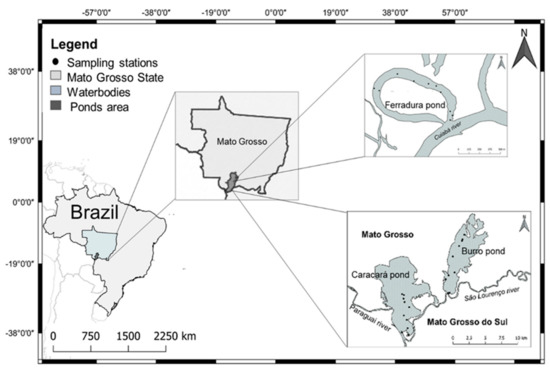