In this study, we compare infinite slope and the three-dimensional stability analysis performed by SCOOPS 3D (software to analyze three-dimensional slope stability throughout a digital landscape). SCOOPS 3D is a model proposed by the U. S. Geological Survey (USGS), the potentialities of which have still not been investigated sufficiently. The comparison between infinite slope and 3D slope stability analysis is carried out using the same hydrological analysis, which is performed with TRIGRS (transient rainfall infiltration and grid-based regional slope-stability model)—another model proposed by USGS. The SCOOPS 3D model requires definition of a series of numerical parameters that can have a significant impact on its own performance, for a given set of physical properties. In the study, we calibrate these numerical parameters through a multi-objective optimization based on genetic algorithms to maximize the model predictability performance in terms of statistics of the receiver operating characteristics (ROC) confusion matrix. This comparison is carried out through an application on a real case study, a catchment in the Oltrepò Pavese (Italy), in which the areas of triggered landslides were accurately monitored during an extreme rainfall on 27–28 April 2009. Results show that the SCOOPS 3D model performs better than the 1D infinite slope stability analysis, as the ROC True Skill Statistic increases from 0.09 to 0.37. In comparison to other studies, we find the 1D model performs worse, likely for the availability of less detailed geological data. On the other side, for the 3D model we find even better results than the two other studies present to date in the scientific literature. This is to be attributed to the optimization process we proposed, which allows to have a greater gain of performance passing from the 1D to the 3D simulation, in comparison to the above-mentioned studies, where no optimization has been applied. Thus, our study contributes to improving the performances of landslide models, which still remain subject to many uncertainty factors. View Full-Text
Keywords: TRIGRS; SCOOPS 3D; rainfall induced landslide; slope stability analysis; optimization TRIGRS; SCOOPS 3D; rainfall induced landslide; slope stability analysis; optimization
►▼ Show Figures 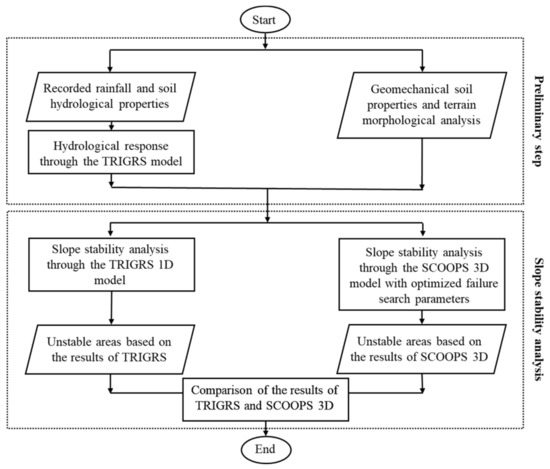