Downstream State and Water Security in the Mekong Region: A Case of Cambodia between Too Much and Too Little Water
Previous Article in Journal

Hydrologic models play an indispensable role in managing the scarce water resources of a region, and in developing countries, the availability and distribution of data are challenging. This research aimed to integrate and compare the satellite rainfall products, namely, Tropical Rainfall Measuring Mission (TRMM 3B43v7) and Precipitation Estimation from Remotely Sensed Information using Artificial Neural Networks-Climate Data Record (PERSIANN-CDR), with a GR2M hydrological water balance model over a diversified terrain of the Awash River Basin in Ethiopia. Nash–Sutcliffe efficiency (NSE), percent bias (PBIAS), coefficient of determination (R2), and root mean square error (RMSE) and Pearson correlation coefficient (PCC) were used to evaluate the satellite rainfall products and hydrologic model performances of the basin. The satellite rainfall estimations of both products showed a higher PCC (above 0.86) with areal observed rainfall in the Uplands, the Western highlands, and the Lower sub-basins. However, it was weakly associated in the Upper valley and the Eastern catchments of the basin ranging from 0.45 to 0.65. The findings of the assimilated satellite rainfall products with the GR2M model exhibited that 80% of the calibrated and 60% of the validated watersheds in a basin had lower magnitude of PBIAS (<±10), which resulted in better accuracy in flow simulation. The poor performance with higher PBIAS (≥±25) of the GR2M model was observed only in the Melka Kuntire (TRMM 3B43v7 and PERSIANN-CDR), Mojo (PERSIANN-CDR), Metehara (in all rainfall data sets), and Kessem (TRMM 3B43v7) watersheds. Therefore, integrating these satellite rainfall data, particularly in the data-scarce basin, with hydrological data, generally appeared to be useful. However, validation with the ground observed data is required for effective water resources planning and management in a basin. Furthermore, it is recommended to make bias corrections for watersheds with poorlyww performing satellite rainfall products of higher PBIAS before assimilating with the hydrologic model. View Full-Text
Keywords: TRMM 3B43v7; PERSIANN-CDR; GR2M Hydrologic Model; Awash River Basin TRMM 3B43v7; PERSIANN-CDR; GR2M Hydrologic Model; Awash River Basin
►▼ Show Figures 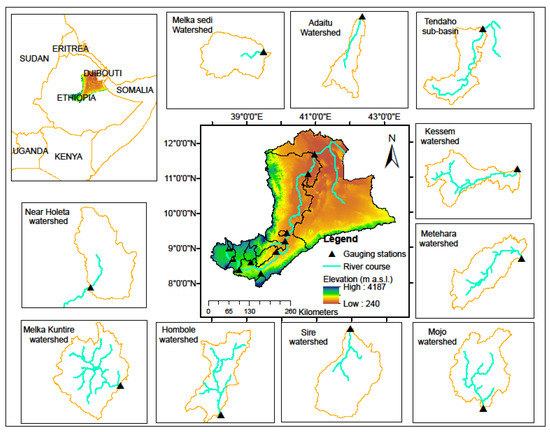