Hydrogeochemical Characteristics and Processes of Shallow Groundwater in the Yellow River Delta, China

The Yellow River Delta is one of the biggest river deltas in China, and the shallow groundwater plays an important role in the development of the local agriculture and ecosystem. However, people are still unclear about the hydrochemical characteristics and mechanisms of the shallow groundwater. In this study, the authors collected and analyzed 81 groundwater samples from the delta plain and piedmont alluvial plain, and explored the hydrochemical features and causes through Piper diagrams, correlation analysis, ionic ratios, and speciation calculations. The results showed that anions were dominated by Cl and HCO3, the concentration of which was much more than that of SO4 and CO3. The groundwater can be divided into various types, including Na–Cl, Ca–Mg–HCO3, Na–HCO3 and Ca–Mg–Cl. This study tested an alternative method–ionic ratios based on the cumulative frequency distribution to characterizing the hydrochemical groups. According to different ion ratios and hydrogeological conditions, three hydrogeochemical zones with different dominant factors have been determined: Weathering—Fresh Water Zone (Zone I), Evaporation—Saline Water Zone (Zone II), and Seawater Mixing Zone (Zone III). As the calculated saturation index show, the calcite and dolomite are saturated, while the halite and gypsum from Zone I to Zone III tend to be saturated. In addition, cation exchange is an important hydrochemical process in the area, and Zone III experiences inverse ironic exchange. In conclusion, this hydrogeochemical zonation would be favorable for water resource management in the Yellow River Delta. View Full-Text
Keywords: hydrogeochemistry; weathering; seawater intrusion; evaporation; ionic ratios hydrogeochemistry; weathering; seawater intrusion; evaporation; ionic ratios
►▼ Show Figures 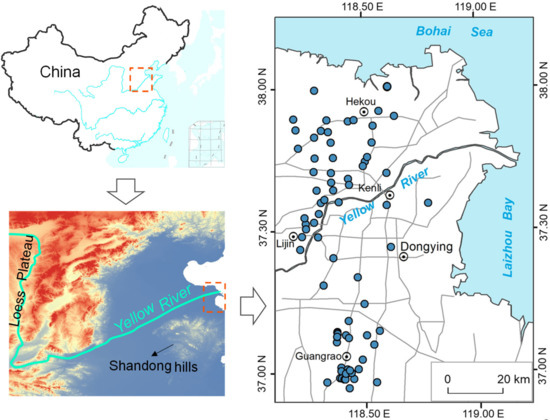