Advantages of the Open Levee (Kasumi-Tei), a Traditional Japanese River Technology on the Matsuura River, from an Ecosystem-Based Disaster Risk Reduction Perspective
Next Article in Special Issue

The control system’s point is to bring the pumping curve close to the set-point curve. That concept is essential for proper design of a pumping station. An adequate design is focused not only on selecting the total number of pumps and the type of control to use (flow or pressure), but it also is important to determine the optimal number of fixed speed pumps (FSPs) and variable speed pumps (VSPs) for each flow rate. This work discusses the most common methods and procedures for control systems on a design of pumping stations with a proposed methodology. This methodology consists of expressing the characteristics of the pumping curve and the set-point curve in a dimensionless form so that the methodology is standardized for any pump model and set-point curve. These formulations allow us to discuss how the characteristic of a pump and the set-point curve of the network influence the optimal number of FSPs and VSPs in energy terms. In general, the objective of this work is to determine the most suitable total number of pumps in a pumping station design and to determine the optimal pumping configuration in every flow rate, thus the consumed energy would be the minimum. Additionally, this methodology develops an expression to estimate the performance of a frequency inverter when a VSP operates at different rotational speeds. This work will be applied to different study cases, and the obtained results allow us to question several usual procedures for pumping control system. In general, it can be concluded that the number of pumps of a pumping system cannot be inferred in a simple form without a deep analysis of a control system. View Full-Text
Keywords: FSP; VSP; control; energy; optimal; set-point curve FSP; VSP; control; energy; optimal; set-point curve
►▼ Show Figures 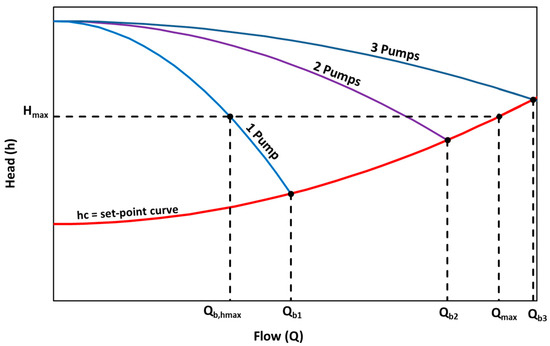