Use of the Zebra Mussel Dreissena polymorpha (Mollusca, Bivalvia) as a Bioindicator of Microplastics Pollution in Freshwater Ecosystems: A Case Study from Lake Iseo (North Italy)
Previous Article in Journal

Assessment of the Impact of Small Hydropower Plants on the Ecological Status Indicators of Water Bodies: A Case Study in Lithuania

Hydropower plants produce renewable and sustainable energy but affect the river’s physico-chemical characteristics and change the abundance and composition of the aquatic organisms. The impact of large HPPs on the ecological conditions of surface water bodies have been extensively studied, but less attention has been paid to environmental impact studies of small hydropower plants (SHPs). The impact of hydropeaking on both the river flow regime and ecosystems has been well-studied for peaking mode plants, mainly medium to large-sized ones. However, for small hydroelectric power plants, and especially for those in lowland rivers, the available information on water quality, benthic macroinvertebrates communities and fish abundance, and biomass is not sufficient. Ten small hydropower plants were selected, and the ecological status of water bodies was assessed in different parts of Lithuania. The studies were performed at the riverbed upstream from the SHPs, where the hydrological regime has not changed, and downstream from the SHPs. It was found that the small hydropower plants do not affect the physico-chemical values of the water quality indicators. This study demonstrated that the total number of benthic macroinvertebrates taxa (TS) is influenced by the concentration of nitrogen and suspended solids, the water flow, the river area, and the current speed; the number of EPT (Ephemeroptera (mayflies), Plecoptera (stoneflies), and Trichoptera (caddisflies)) taxa is influenced by the concentration of nitrogen and suspended solids. The studied indicators do not have a significant impact on biomass. The SHPs affect the fish abundance and biomass. The Lithuanian fish index (LFI) is influenced by the average depth and area of the river. Some SHPs operating in lowland areas may yield somewhat significant hydrograph ramping but more detailed investigation is needed to support the significance of this impact on the biological indices. View Full-Text
Keywords: small hydropower plant (SHP); ecological status indicators; water quality small hydropower plant (SHP); ecological status indicators; water quality
►▼ Show Figures 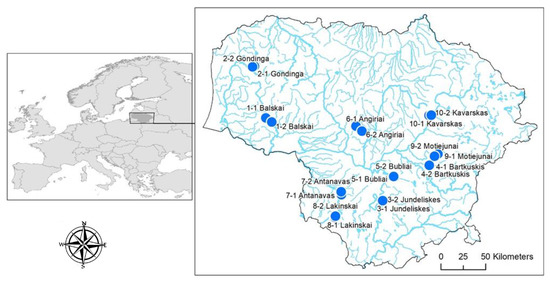