Ammonia is one of the major pollutants in the aquatic ecosystem. Hyriopsis cumingii has great potential for the restoration of eutrophic water. However, there is no study investigating the effect of ammonia exposure in H. cumingii. The median lethal concentration (96 h LC50) of unionized ammonium was 12.86 mg/L in H. cumingii. In the study, H. cumingii were exposed to 6.43 mg L−1 unionized ammonium (1/2 96 h LC50) for 0, 6, 12, 24, 48, 72, and 96 h. High environment ammonia induced antioxidant response to protect the body from oxidative damage. After exposure to ammonia, there was a same trend of induction followed by inhibition of the activities of superoxide dismutase (SOD), catalase (CAT), glutathione peroxidase (GPx), and glutathione-S-transferases (GST) in the hepatopancreas and gills of H. cumingii. However, the antioxidant response could not completely counteract the oxidation effect during the exposure period, resulting in lipid peroxidation (LPO) and tissue injury in the hepatopancreas and gills of H. cumingii eventually. Moreover, this study indicated that glutamine synthetase (GS), glutamate dehydrogenase (GDH), alanine aminotransaminase (ALT), and aspartate aminotransaminase (AST) in the hepatopancreas and gills may play an important role in ammonia detoxification of H. cumingii. Our results will be helpful to understand the mechanism of aquatic toxicology induced by ammonia in shellfish. View Full-Text
Keywords: Hyriopsis cumingii; ammonia; oxidative stress; detoxification Hyriopsis cumingii; ammonia; oxidative stress; detoxification
►▼ Show Figures 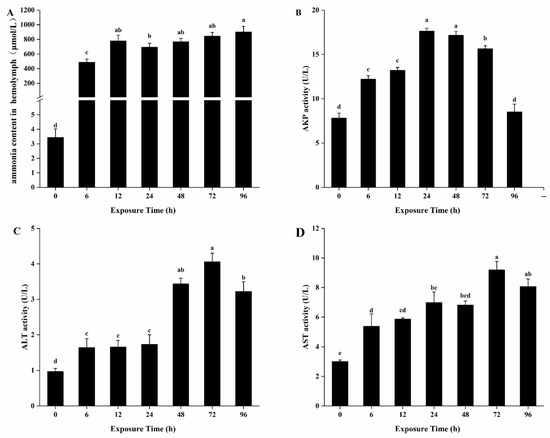