Assessment of the Contribution of Rainwater Collection to Crop Production on Udo Island, Korea

This study evaluated the contribution of small agricultural reservoirs (the mool-tongs) to crop production on Udo, and the role they play. Agricultural water demand and deficit, water storage in the mool-tongs, and the amount of irrigation water were analyzed by applying the water balance model. In particular, the Blaney-Criddle method was used to estimate the agricultural water for crop growth. In this study, four typical crops of garlic, spring onion, peanut, and barley were considered, whose growing seasons were somewhat different from each other. A total of 47 years (1973–2019) of rainfall, temperature, and evaporation data were used in this study. As a result, it was confirmed that the crop coefficient, growing period of a crop, share of the cultivated area, and the seasonal distribution of rainfall affect the role of the mool-tongs. Comparison of the frequencies of occurrence of agricultural water deficit and irrigation interval before and after introducing the mool-tongs also confirms their usefulness. After the introduction of the mool-tongs for irrigation, the frequency of occurrence of agricultural water deficits changed significantly, from almost 30% of the entire simulation period to less than 20%. Even though the water supply capacity of the mool-tongs on Udo is insufficient to offset the entire agricultural water deficit, the water stored in the mool-tongs was found to considerably aid the survival of the crops and increase crop production. The results in this study can help to determine the capacity of rainwater collecting systems, especially on a small island where the available water resources are limited. View Full-Text
Keywords: rainwater collection; Blaney-Criddle; water balance model; Udo; mool-tong rainwater collection; Blaney-Criddle; water balance model; Udo; mool-tong
►▼ Show Figures 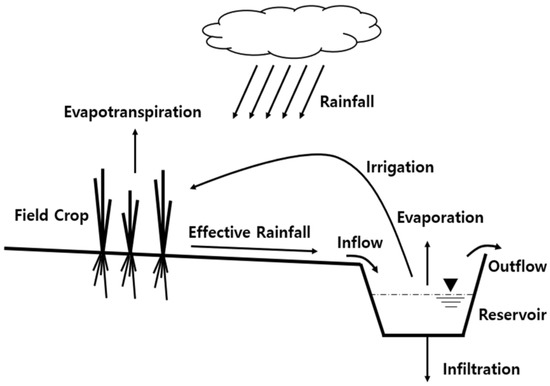