Nitrogen and phosphorus are key elements in controlling eutrophication in the aquatic system. Water and sediment samples were collected from Hongfeng Lake, a seasonally stratified reservoir in southwest China, in winter and summer. Diffusion fluxes of NH4+, NO3−, and labile P in summer using diffusive gradients in thin films technology were 3.4, −37.2, and 0.9 mg m−2 day−1, respectively, based on Fick’s first law. The diffusion flux of labile P was 2.05 mg m−2 day−1 in winter. The contributions fraction of the labile P diffusion flux from sediment to the overlying water were higher in winter than those in summer, because of the relatively lower external input, concentrations and higher diffusion fluxes in winter. After the external input decreased, all of the three diffusion fluxes were lower than the previous record. To understand the influence effect of hydrodynamics, environmental fluid dynamics code modeling was used to simulate the flow and temperature field in winter and summer. Modeling results showed that velocity in summer was higher than that in winter due to concentrated rainfall within the catchment. Moreover, the velocity and temperature in the euphotic zone were higher than that of the hypolimnion in summer. Less variation of velocity and temperature in vertical profile in winter than that in summer was observed, which may be attributable to the high specific heat capacity and the low heat conductivity of water. There was no significant correlation among velocity, hydrochemistry, nitrogen, and phosphorus concentrations. Hydrodynamics, solar radiation, and water depth affect the position of the thermocline, which was consequently to water temperature, hydrochemistry, dissolved nitrogen, and phosphorus concentration. Correlation analysis suggested that the higher bottom velocity and total bed shear may accelerate labile P, NH4+, and NO3− diffusion fluxes. These results provide evidence and suggestions for preventing and controlling reservoir eutrophication and water safety management. View Full-Text
Keywords: environmental fluid dynamics code; total bed shear; internal release; Hongfeng Lake environmental fluid dynamics code; total bed shear; internal release; Hongfeng Lake
►▼ Show Figures 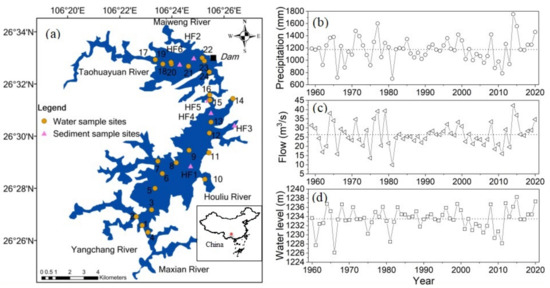 Yulin Li
Mr Li is an administrator of the reservoirs. He also measured the hydrol-chemistry of lake water.

Xiaozheng Li
Mr Li focuses on the nitrogen cycle of aqutic system, particularly nitrogenous gas.
Zoom | Orient | As Lines | As Sticks | As Cartoon | As Surface | Previous Scene | Next Scene
We use cookies on our website to ensure you get the best experience. Read more about our cookies here.
Accept
We have just recently launched a new version of our website. Help us to further improve by taking part in this short 5 minute survey here. here.
Never show this again