Mining Transition and Hydropower Energy in Greece—Sustainable Governance of Water Resources Management in a Post-Lignite Era: The Case of Western Macedonia, Greece

Multi-Indices Assessment of Origin and Controlling Factors of Trace Metals in River Sediments from a Semi-Arid Carbonated Basin (the Sebou Basin, Morocco)

River water quality is particularly of concern in semi-arid countries with limited water resources. Increasing anthropogenic activities can lead to the accumulation of trace metals (TM) in bottom sediments, which is a specific storage compartment. The present study aimed to investigate the geochemistry of trace metals (As, Cd, Co, Cr, Cu, Ni, Pb, Zn) and of some physico-chemical parameters in bottom sediments from the Sebou basin, which represents 1/3 of the surface water resources of Morocco. The order of abundance of the metals was Zn > Cr > Cu > Ni > Pb > Co > As > Cd. A major fingerprint of weathering on metal concentration, and point and non-point anthropogenic sources were highlighted. The origin and intensity of the contamination were determined using a combination of geochemical indicators. The contamination was on the whole moderate, with Cr, Zn, Cu, and Pb as the most enriched metals, especially at the A1, S3, and S4 stations located downstream of Fez city, well known for its intensive industrial and tannery activities. A multi-variate analysis evidenced the strong link between natural elements such as Co with clays and Fe oxides, and As with Ca, whereas Cd, Cu, Cr, Ni, Pb, Zn, partly originating from anthropogenic activities (industrial and domestic waste, agricultural inputs), were linked to phosphorus, oxides, carbonates, and/or POC, indicating their anthropic source and/or control by sediment compounds. Cadmium, Pb, and Cu were the most available metals. Finally, in addition to Cd, Pb and Zn were identified as hazardous metals in sediments as evidenced by the positive relationship between the proportion of the labile fraction and the enrichment factor revealing anthropogenic inputs. View Full-Text
Keywords: river sediments; trace metals; contamination indices; texture and organic carbon; available fraction; Sebou basin river sediments; trace metals; contamination indices; texture and organic carbon; available fraction; Sebou basin
►▼ Show Figures 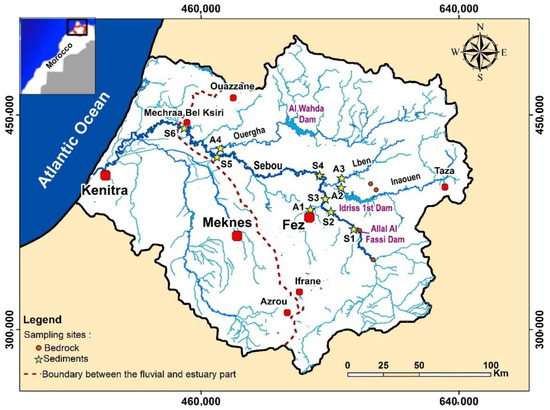