Effects of Water Depth on the Growth of the Submerged Macrophytes Vallisneria natans and Hydrilla verticillata: Implications for Water Level Management

Algal blooms are one of the most serious threats to water resources, and their early detection remains a challenge in eutrophication management worldwide. In recent years, with more widely available real-time auto-monitoring data and the advancement of computational capabilities, fuzzy logic has become a robust tool to establish early warning systems. In this study, a framework for an early warning system was constructed, aiming to accurately predict algae blooms in a river containing several water conservation areas and in which the operation of two tidal sluices has altered the tidal currents. Statistical analysis of sampled data was first conducted and suggested the utilization of dissolved oxygen, velocity, ammonia nitrogen, total phosphorus, and water temperature as inputs into the fuzzy logic model. The fuzzy logic model, which was driven by biochemical data sampled by two auto-monitoring sites and numerically simulated velocity, successfully reproduced algae bloom events over the past several years (i.e., 2011, 2012, 2013, 2017, and 2019). Considering the demands of management, several key parameters, such as onset threshold and prolongation time and subsequent threshold, were additionally applied in the warning system, which achieved a critical success index and positive hit rate values of 0.5 and 0.9, respectively. The differences in the early warning index between the two auto-monitoring sites were further illustrated in terms of tidal influence, sluice operation, and the influence of the contaminated water mass that returned from downstream during flood tides. It is highlighted that for typical tidal rivers in urban areas of South China with sufficient nutrient supply and warm temperature, dissolved oxygen and velocity are key factors for driving early warning systems. The study also suggests that some additional common pollutants should be sampled and utilized for further analysis of water mass extents and data quality control of auto-monitoring sampling. View Full-Text
Keywords: fuzzy logic; early warning; algal blooms; eutrophication fuzzy logic; early warning; algal blooms; eutrophication
►▼ Show Figures 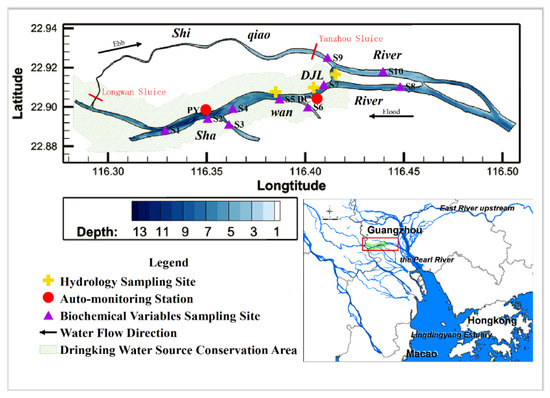