Do the Volume-of-Fluid and the Two-Phase Euler Compete for Modeling a Spillway Aerator?
Next Article in Special Issue

This paper addresses groundwater pollution and the potential presence of pesticides within the catchment areas of two reservoirs that are sources of drinking water. The two reservoirs are Goczałkowice and Kozłowa Góra, both in Southern Poland. Agricultural and rural areas dominate both catchments. Archival data showed local groundwater contamination with nitrates. This indicated the possible presence of pesticides in shallow groundwater. In total, 13 groundwater samples from shallow sandy aquifers were collected. All the samples were tested for the presence of 35 organophosphate pesticides and 28 organochlorine pesticides. Additionally, in order to determine the current groundwater conditions, physicochemical parameters were measured in the field, and water samples were subjected to analysis of their chemical composition (incl. the determination of nitrates). The research outcomes showed that pesticides were not detected above the detection limits in any of the samples. Due to variations in the persistence and degradation rates of pesticides, the occurrence of these substances in the groundwater environment and the possibility of their migration to aquifers should not be completely excluded. Natural processes and factors (e.g., sorption, biodegradation, hydrolysis and redox conditions) may gradually reduce the pesticide concentrations in groundwater. The chemical analyses revealed high concentrations of nitrates in the groundwater. This suggests the possible influence of agriculture and fertilizer application on groundwater quality; however, a proportion of NO3- ions may be connected with improper sewage management within the two catchments. The absence of pesticides in groundwater impacted by agriculture may result from processes occurring in the aquifer and the rapid degradation of these compounds due to photolysis and prevailing weather conditions. In the vicinity of dwellings, nitrates also originate from domestic wastewater. Thus, the occurrence of pesticides in groundwater contaminated with NO3 cannot always be expected.
Keywords: pesticides; emerging contaminants; nitrates; agriculture; groundwater quality pesticides; emerging contaminants; nitrates; agriculture; groundwater quality

Pesticides are chemicals that are widely used all over the world as plant protection products, which allow plant growth to be controlled and pests to be repelled. These substances are applied in agriculture since they significantly improve crop yields, deter pests such as insects, and kill weeds. The use of pesticides in high doses may contribute to contamination of the water environment, since chemicals may be leached from soils and migrate to shallow aquifers [1,2,3,4,5,6,7]. Pesticides and their metabolites have the potential for bioaccumulation and toxicity, and there are concerns regarding the effect of the drinking of contaminated water on human health [8,9,10]. Therefore, in some countries, pesticides in groundwater have been included in monitoring programs, e.g., in Spain [11], Ireland [4] and New Zealand [12].
Unfortunately, pesticide determination is a costly exercise, and is far more expensive than the determination of nitrates, which are the predominant form of inorganic nitrogen in groundwater within agricultural areas. Therefore, to minimize costs connected with groundwater quality assessments, there have been attempts to link increased concentrations of nitrates in groundwater to the presence of pesticides, especially in cases of domestic wells [13,14]. One example is a monitoring study conducted in Minnesota, USA [15], which revealed that high concentrations of nitrates are related to the presence of pesticide residues in shallow aquifers. It was reported that in groundwater with the highest amount of NO3, the probability of pesticide detection was 89%, whereas the total pesticide concentrations reached up to 50 µg/L. According to this study, both the detection frequency and the observed pesticide concentrations increased with the increasing nitrate concentration. Similar correlations between nitrates and pesticides in groundwater were also found in other studies conducted by Maanen et al. [16], Kraft et al. [17], Baroudi et al. [18] and Close and Humphries [12], in which the highest concentrations of nitrates in sampled water were accompanied by pesticides. Since groundwater within agricultural areas is often contaminated with NO3 and linked with agricultural activities, the co-occurrence of nitrates and pesticides in such aquifers seems to be highly probable.
Groundwater within rural areas is often enriched in nitrates [19,20,21]. The application of fertilizers and manure is a widespread practice; however, agricultural activity is not the only factor responsible for elevated concentrations of NO3. Another important source of nitrates in such areas is domestic wastewater [22]. THis applies primarily to unsewered areas, where nitrogen compounds may migrate from leaking septic tanks to an aquifer [23,24]. Several pollution sources may affect the groundwater chemical composition, and thus concentrations of some components are higher. In the case of mixed land use and the presence of potential pollution sources other than arable lands, nitrate concentrations and the occurrence of pesticide in groundwater are less likely to correlate.
In Poland, intensive farming practices were introduced at the beginning of the 1970s. Since then, the use of fertilizers as well as agricultural chemicals has increased. Not only has this led to groundwater being polluted with nitrates in rural areas, but also to the possibility of pesticides being present in shallow aquifers [17,25,26]. In the past, the quantity of pesticides applied in Poland for agricultural purposes was 0.6–0.8 kg/ha (expressed as active substances) [27]. Over the last decades, the average pesticide application has increased (up to 2.2 kg/ha in 2017), although pesticide use in Poland is lower in comparison to other European countries (e.g., Italy—6.1 kg/ha, Germany—4.0 kg/ha, France—3.6 kg/ha). Nevertheless, in Poland a clear upward trend has been observed for pesticide application (the relative change for the period 1990–2017 was +500%), in contrast to Western Europe as a whole (the relative change was −10%) [28]. Moreover, the sale of plant protection products (herbicides) has also increased [29]. Thus, the migration of pesticides from surface to groundwater may still be expected. It is noteworthy that recent research confirmed that pesticides may still occur locally in the groundwater of Poland [30,31]. In spite of this, the monitoring of pesticides in groundwater bodies is not mandatory in this country [32].
In order to assess the groundwater contamination with pesticides and their correlation with nitrate concentrations, two areas dominated by agriculture were selected, the catchment areas of two reservoirs located in the Silesian Voivodeship, Poland: Goczałkowice and Kozłowa Góra. Previous investigations revealed increased nitrate concentrations in groundwater in both areas [33,34]. In these areas, pesticide determination for the reservoirs (Goczałkowice and Kozłowa Góra) and inflowing rivers (Vistula and Brynica) was included in studies on the status of surface water bodies [35]. To date, there has been no research on the occurrence of pesticide in shallow aquifers within these two catchments. Since there are many reports on the co-occurrence of nitrates and pesticides in groundwater within rural areas, the authors decided to test this premise in the two catchments. In the case of pesticides, two of the most common groups were taken into account: organophosphate and organochlorine pesticides.

Although the significant influence of human activity (agriculture combined with poor sewage management) on groundwater quality was manifested through elevated concentrations of nitrates (up to 145.16 mg/L), the results of the investigation showed that pesticides were absent or nearly so. Over the last few years, both the application and sale of pesticides have increased; however, they were not detected in wells under the potential combined impact of agriculture and improper sewage management, nor in sampling points located in agricultural areas far from households and other buildings. It can be assumed that nitrates in the groundwater from sampling points P1, P7, P9 and P12 only originated from agricultural activity. In this regard, it should be concluded that groundwater contaminated with NO3 originating from agricultural sources does not necessarily indicate the presence of pesticide residues. Negative results were obtained concerning organochlorine pesticides (more persistent in the environment) as well as organophosphate compounds (with lower half-lives). Nonetheless, the absence of pesticide residues in aquifers within the studied catchments does not imply that groundwater bodies in other parts of Poland (where agricultural dominates) are also free from pollution. It is still the case that little is known about the co-occurrence of nitrates and pesticides in thr groundwater of Poland; therefore, more research should be considered to assess the possible correlations between nitrate concentrations and the presence of pesticides in aquifers.

This study was performed in the framework of the project titled “The modification of groundwater chemical composition in selected aquifers under conditions of diversified human activity with regard to emerging contaminants”, financed from a grant of the Ministry of Sciences and Higher Education of Poland for conducting research by young scientists and PhD students.

The data presented in this study are available within this article.

The authors would like to thank Piotr Siwek for his assistance during fieldwork. 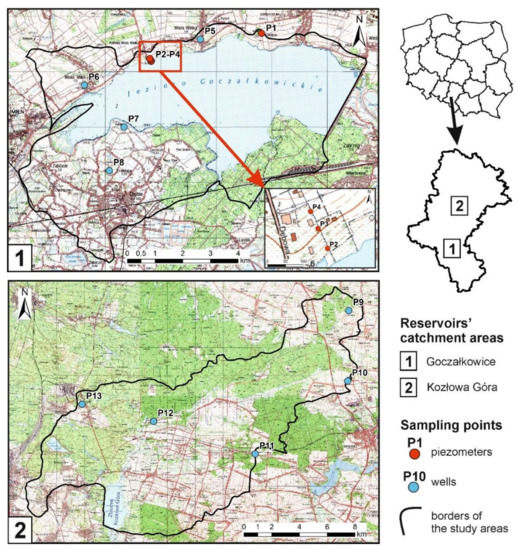 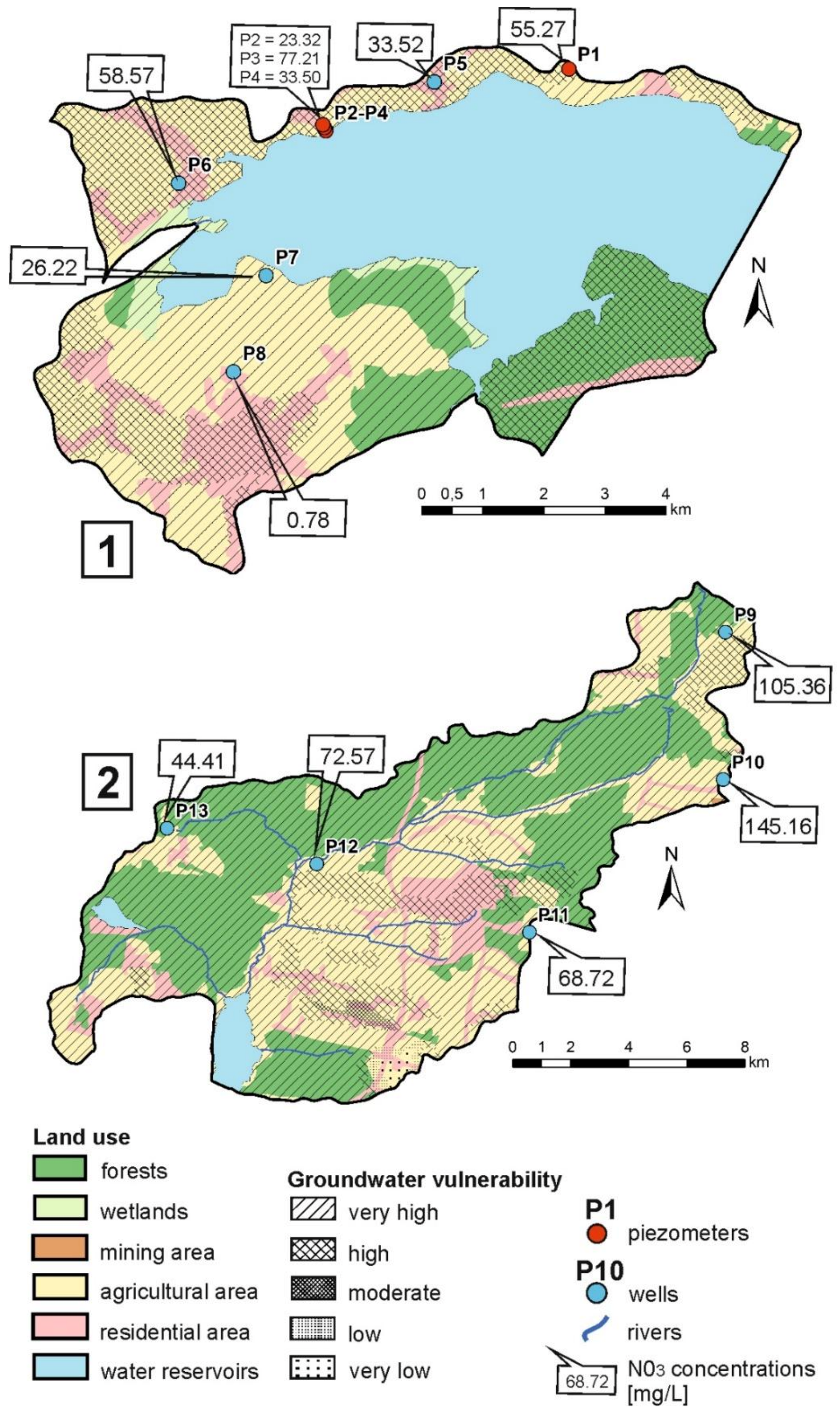 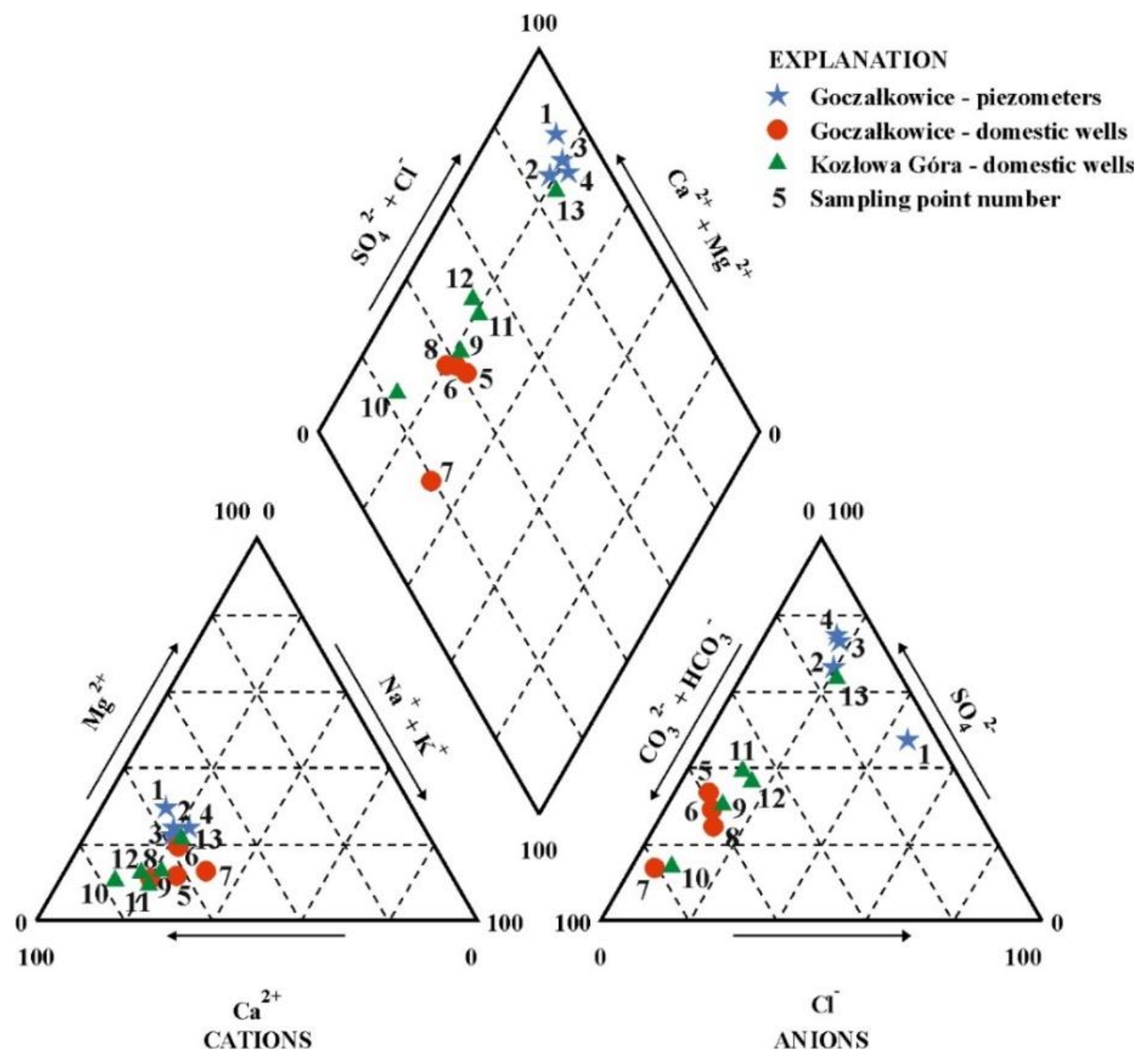 Table 4. Hydrogeochemical types of sampled groundwater.
Table 4. Hydrogeochemical types of sampled groundwater.
© 2021 by the authors. Licensee MDPI, Basel, Switzerland. This article is an open access article distributed under the terms and conditions of the Creative Commons Attribution (CC BY) license (https://creativecommons.org/licenses/by/4.0/).
We use cookies on our website to ensure you get the best experience. Read more about our cookies here.
Accept
We have just recently launched a new version of our website. Help us to further improve by taking part in this short 5 minute survey here. here.
Never show this again