Flood Hazards in Flat Coastal Areas of the Eastern Iberian Peninsula: A Case Study in Oliva (Valencia, Spain)
Next Article in Special Issue

A Review on SARS-CoV-2 Genome in the Aquatic Environment of Africa: Prevalence, Persistence and the Future Prospects
Previous Article in Journal

Runoff with excessive nutrients from rice paddy fields that releases into the Pacific Ocean has been a possible cause of water body pollution and harm to marine life. Constructed wetlands had developed for decades but were rarely implemented in treating agricultural pollution in Taiwan. Moreover, the environmental policies haven’t provided enough instructions, support, or compensation for the establishment of this practice. The rice paddy field that was chosen in this study is located in Xinshe, Taiwan. It is close to the Pacific Ocean where coral reefs are nearby and fishery resource is abundant. In this study, the northern half of the whole organic field was chosen, and the contributing area is approximately 1 × 105 m2. Four plots of constructed wetlands (approximately 17.5 m wide, 16.7 m long, and 0.2 m deep each, covering 1164.74 m2 of the total area) and employing surface flow were established as CW treatment. Water spinach (Ipomoea aquatica) was used for treating the nutrient runoff from organic rice paddy fields. Water samples of input and output of constructed wetlands were collected during 51 days of the experimental period (from the first day of rice transplantation to 10-days before harvest). Ammonia, nitrate, nitrite, phosphate, and total phosphorus concentrations were analyzed to calculate the nutrient load. The runoff of rice paddy fields without constructed wetlands was also sampled as a reference (RPF treatment). In average, about 54.3% ammonia and 42.7% nitrate was removed from the runoff that went through the CW treatment, while 4.2% ammonia and 51.3% nitrate increase were found at the output of the RPF treatment. Meanwhile, 35.6% of total phosphorus and 29.5% of phosphate were removed from the runoff of constructed wetlands. Only 16.4% total phosphorus and 6.4% phosphate were removed from the RPF treatment. Results indicate that constructed wetlands are promising treatment for agricultural runoff and the result can be used as a reference for the future environmental policies enactment in Taiwan. View Full-Text
Keywords: constructed wetlands; nutrient; nitrogen; phosphorus; landscape management; agricultural runoff; ecosystem services constructed wetlands; nutrient; nitrogen; phosphorus; landscape management; agricultural runoff; ecosystem services
►▼ Show Figures 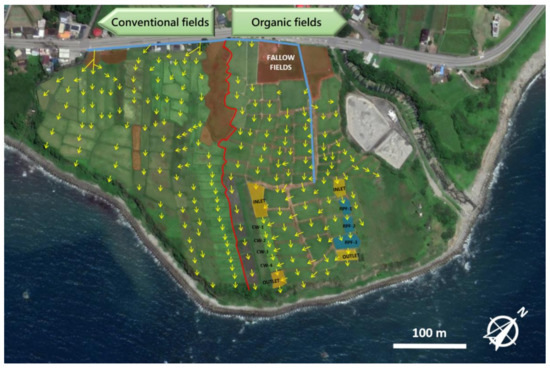