An Assessment of Hydroacoustic and Electric Fishing Data to Evaluate Long Term Spatial and Temporal Fish Population Change in the River Thames, UK
Next Article in Special Issue

A Characterization of the Hydrochemistry and Main Controlling Factors of Lakes in the Badain Jaran Desert, China

Badain Jaran Desert, the coexistence of dunes and lakes, and the presence of the world’s tallest dunes, has attracted worldwide attention among hydrologists. Freshwater, brackish, and saline lakes coexistence in the Badain Jaran Desert under extremely arid environmental conditions. This raises the question of why diverse lake water types exist under the same climatic conditions. Answering this question requires the characterization of lake hydrochemistry and the main controlling factors. The purpose of the presented research was to systematically analyzed samples from 80 lakes using statistical analysis, correlation analysis and hydrogeochemical methods to investigate the hydrochemical status and evolution of lakes in the Badain Jaran Desert. The results showed that the lake water in Badain Jaran Desert is generally alkaline, with the average pH and TDS were 9.31 and 165.12 g L−1, respectively. The main cations to be Na+ and K+, whereas the main anions are Cl− and SO42−. HCO3− and CO32− decreased and SO42− and Cl− increased from southeast to northwest, whereas lake hydrochemistry changed from the SO42−-Cl−-HCO3− type to the SO42−-Cl− type and lakes transitioned from freshwater to saline. The freshwater and slightly brackish lakes are mainly distributed in the piedmont area at a high altitude near the Yabulai Moutains, whereas saline lakes are mainly distributed in the desert hinterland at a low altitude, and there is a roughly increasing trend of ions from the Yabulai Mountains. The evaporation-crystallization reactions are the dominant in the study region. Moreover, some saline mineral deposits, are extensive in these regions caused by intense evaporation-crystallization. View Full-Text
Keywords: hydrochemical characteristics; ion exchange; evaporation-crystallization; controlling factors; Badain Jaran Desert hydrochemical characteristics; ion exchange; evaporation-crystallization; controlling factors; Badain Jaran Desert
►▼ Show Figures 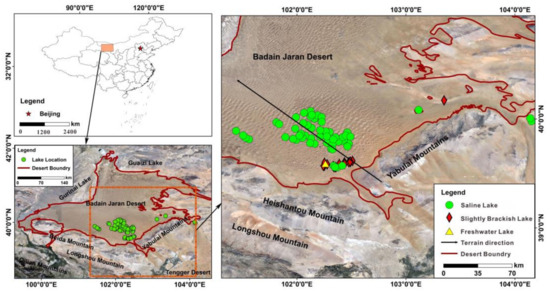