Effects of Water Level Fluctuations on the Growth Characteristics and Community Succession of Submerged Macrophytes: A Case Study of Yilong Lake, China
Next Article in Special Issue

Estimation of Populuseuphratica Forest Leaf Litterfall and Time Variation of Nutrient in Leaf Litter during Decomposition along the Main Channel of the Tarim River, China

Spatial Distributions of Nitrogen and Phosphorus in Surface Sediments in Intertidal Flats of the Yellow River Delta, China

The spatial distributions of nitrogen (N) and phosphorus (P) in surface sediments are of great significance in studying the ecological process of nutrient cycling in intertidal flats. However, little is known about N and P’s spatial distribution in intertidal flats of the Yellow River Delta (YRD). We analyzed the N and P contents in surface sediments and Suaeda glauca density at the low-tidal level to identify the spatial distributions of nutrients and their influencing factors in coastal tidal flat sediments. The results showed that the total nitrogen (TN) and total phosphorus (TP) concentrations in this study were both lower than the background values of China’s shallow sea sediments. The spatial distributions of N and P had significantly spatial heterogeneity, while those of the nutrients at different distances from the low-tidal level to the coastline showed no significant distance effects. The spatial distribution of S. glauca in coastal tidal flats had significant location characteristics and was closely related to the distribution of TN and pH. The TN in non-estuarine intertidal flats was less than that in estuaries; in contrast, the TP was higher in non-estuaries. There are some differences of N and P between estuary and non-estuary areas.
Keywords: coastal wetland; nitrogen; non-estuary; phosphorus; spatial pattern; Yellow River Delta coastal wetland; nitrogen; non-estuary; phosphorus; spatial pattern; Yellow River Delta

This study was carried out in the coastal tidal flats of the YRD. The YRD, located in the northern part of Shandong Province, China, covers an area of about 6000 km2. A century and a half ago, this vast area was part of the Bohai Sea, the youngest river delta formed by the shift of the Yellow River’s route. The YRD is characterized by a temperate, semi-humid continental monsoon climate. The average annual temperature in the YRD is 12.1 °C, and the average maximum and minimum temperatures are 26 °C in July and −4 °C in January, respectively. The average annual precipitation is 600 mm, of which 70% is rainfall during the summer. The mean annual potential evaporation is 2049 mm·year−1, which far exceeds the rainfall of this area [20,21].

In this study, sampling sites were selected on the tidal flats along the coastline of the YRD from the Tuhai River estuary to the Guangli River estuary (Figure 1). In September 2017, in total, seven sampling sites and 21 sampling lines were selected, all of which were located in non-estuary intertidal flats with the same plant communities (single populations of Suaeda glauca) (Figure 2). At each sample site, there were 3 sample lines perpendicular to the shoreline, and the distance between the sample lines was 200–300 m. We set 7 sample points evenly from the low-tidal level to the coastline in each sample line, and the distance between the sample points was 200 m. Due to the construction of seawalls and roads, we only set five sample points for each sample line at sample sites 2 and 4. Surface sediments (0–5 cm) were collected at each sample point by 5-spot sampling. A total of 102 sediment samples were collected. The sediment samples were kept in plastic bags and taken back to the laboratory to be air-dried. If there was vegetation at the sample points, we randomly selected three plant quadrates (1 m × 1 m) and recorded the number of plants.

2.3. Characteristics and Analyses of the Sediments

One-way ANOVA was used to analyze the effects of the sample sites and the distances from the sea on the TN, NO3–N, NH4–N, TP, and AP in the sediments. After carrying out one-way ANOVA, Fisher’s Protected LSD test was used to detect significant differences (p < 0.05) among the sample sites or the different distances from the low-tidal level to the coastline. Pearson’s correlation analysis was performed to test the relationship between the TN, NO3–N, NH4–N, TP, AP, TOC, pH, and grain size fractions in the sediments.

3.1. The Physicochemical Characterization and Plant Distribution Characteristics of the Sediments

3.2. Nitrogen (N) and Phosphorus (P) Fractions of the Sediments at Different Locations

3.3. N and P Fractions of the Sediments at Different Distances from the Low-Tidal Level

The distance effects of the N and P fractions reflected the changes of increased distance from the low-tidal level to the coastline. However, the results showed no significant distance effects. At all of the sample sites, the spatial distribution of the TN content in the sediments at different distances from the low-tidal level was not wholly consistent (Figure 5a), while the differences between the distances were not significant (Table 1); NH4–N and NO3–N also did not present similar characteristics of changing trends, and this might indicate that the spatial distributions of the N fractions in the sediments were heterogeneous between different sampling sites. Except for sample sites 3 and 5, the spatial distributions of the TP (Figure 5e) and AP (Figure 5d) of the sediments at different distances from the low-tidal level were similar, but the differences in the TP and AP of sediments between different distances were not significant (Table 1).

3.4. The Influencing Factors of Spatial Distributions of N and P

4.1. Spatial Changes in the N and P Fractions in the Coastal Tidal Flat Sediments of China

The sediments’ environmental factors have important effects on the N and P fractions in the coastal tidal flats [16]; the sediment pH is an especially important factor that affects the nutrient distribution of sediments [43,44], and the effects of the sediment pH on different nutrients may even vary. This study showed a significant negative correlation between the AP and the pH of the sediments, which was in agreement with the findings of previous studies [17,45]. Changes in the soil pH can greatly influence P sorption or desorption in coastal wetlands [44], and the gross N mineralization and NH4–N immobilization processes were related closely to the sediment pH [46]. Sediments N and P levels were affected by soil organic matter [47]. The initial soil organic matter content was found to be an important factor influencing P sorption and desorption [44], and our data supported this conclusion. The TOC of the sediments was significantly positively correlated with the AP in this study.
The spatial variations in the sediment distributions in the tidal flats played an essential role in controlling the concentration, transformation, and redistribution of nutrients [37]. The YRD has a zigzag coast and is a complex delta formed by the superposition of multiple flower-petal-like accumulations [48]. Different geomorphic units have diverse and dynamic sedimentary environments, so sediments have different grain size gradations on the coast of the YRD [49]; our data on the grain size distribution also supported the above view. Variations in the grain size distribution can influence the spatial-patch characteristics of N and P in coastal wetlands [37]. Although the TN content of the sediments was reported to be associated with the clay particle content [37], no significant correlations were observed between them or with NO3–N and AP in this study.

4.3. Effects of Vegetation on N and P in the Sediments

S. glauca is a local therophyte that is widely distributed in the coastal wetlands of the YRD (Figure 2a), and its single populations forms a “red beach” landscape (Figure 2b). It has a strong salt resistance and could improve saline soil [50,51]. N and P are essential nutrients for the growth of S. glauca and can directly affect the primary production of wetland ecosystems [27,52]. Meanwhile, plants affect sediments’ nutrient concentrations and distributions [53,54]. In this study, a significant correlation between the S. glauca density and the TN content of the sediments (Table 2) supported the above conclusions. However, the S. glauca density had different effects on different nutrients in the sediments. There was no significant correlation between the S. glauca density and the TP, NO3–N, NH4–N, and AP contents, unlike on the TN. We believe that the relationship between plants and TN may be related to the lower salt concentrations in estuarine intertidal flats, which are more suitable for plant growth.
The coastal annual plant density may not be the leading determinant of nutrient distributions in sediments. Compared to mangroves and Tamarix, S. glauca may have a weaker capacity to reduce tidal transport and nutrient enrichment [36,55]. Coastal perennials have much larger underground structures and stronger stems compared with annuals. Only parts of their perennial tissues decompose as litter, while the litter of the S. glauca community can completely decompose into the wetland soil within one year [32,56]. It may be challenging to change the nutrient distribution in sediments significantly by increasing the annual plant density. In this study, although there were significant differences in the plant densities between the sample sites, the relationship between plant density and nutrients must be further studied because there was only one species of plants. In addition, compared to the influences of plants, the influence of altitude and hydrological conditions on nutrient distribution may be more intense [35,40].
This study did not consider the ecological effects of microorganisms and algae on nitrogen and phosphorus, so there may be limitations. Some studies indicated that microbial community had high purification capacity in the tidal flats [3]. Thus, not only plant communities but also marine algae and soil microbial microorganisms are needed to quantitatively confirm the distribution of the nitrogen and phosphorus of surface sediments in intertidal flats.

This research was funded by the National Key Research and Development Program of China, grant number 2017YFC0506200; and the Biodiversity Survey and Assessment Project of Ministry of Ecology and Environment, China (2019–2023), grant number 2019HJ2096001006. 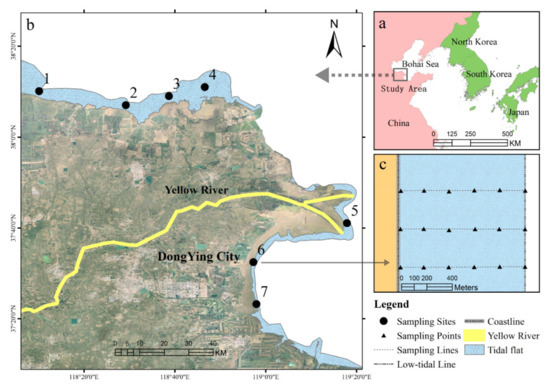 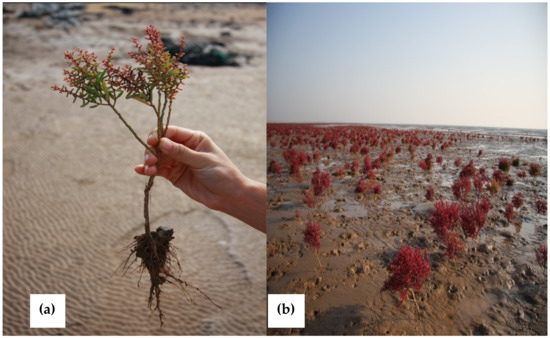 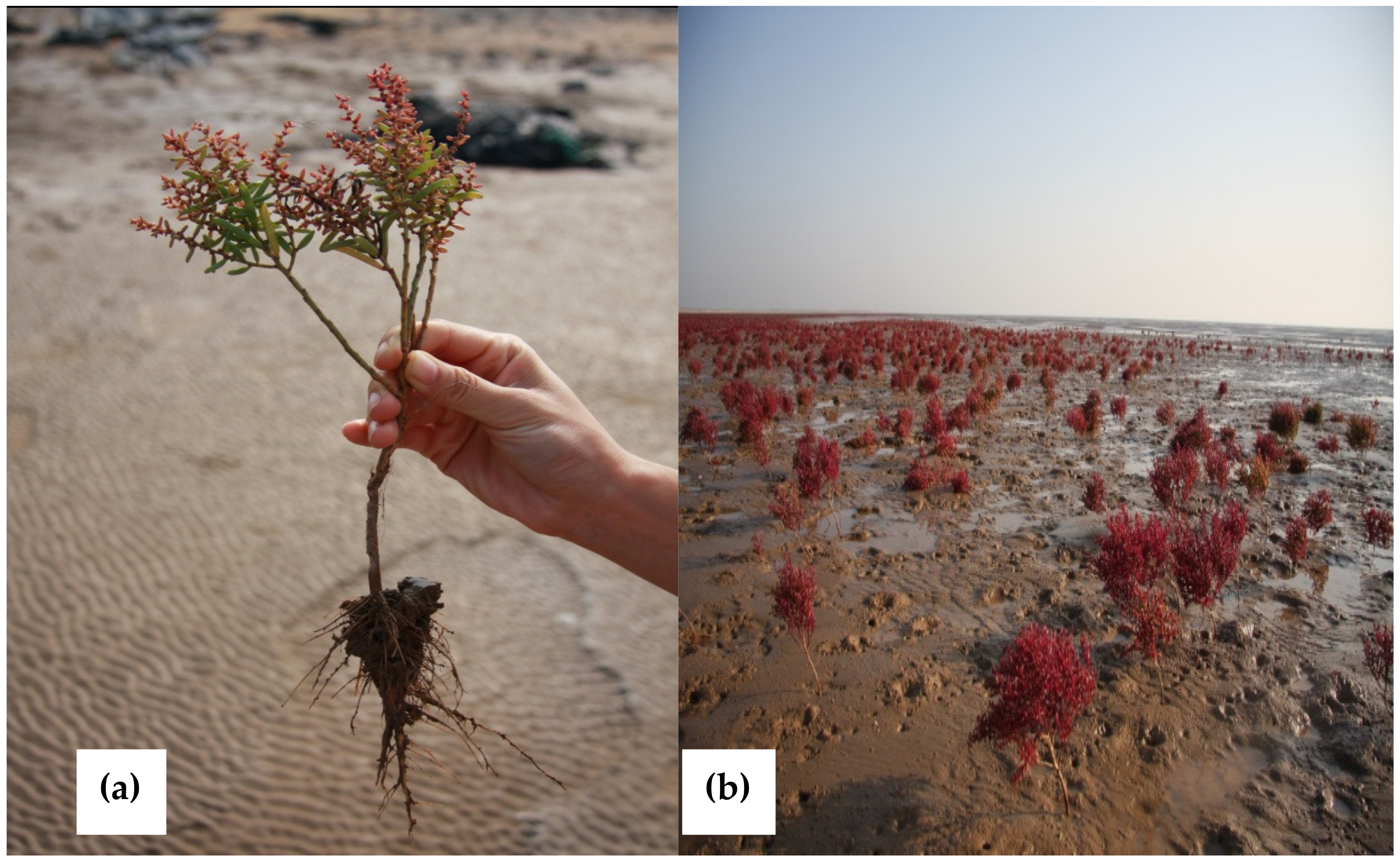 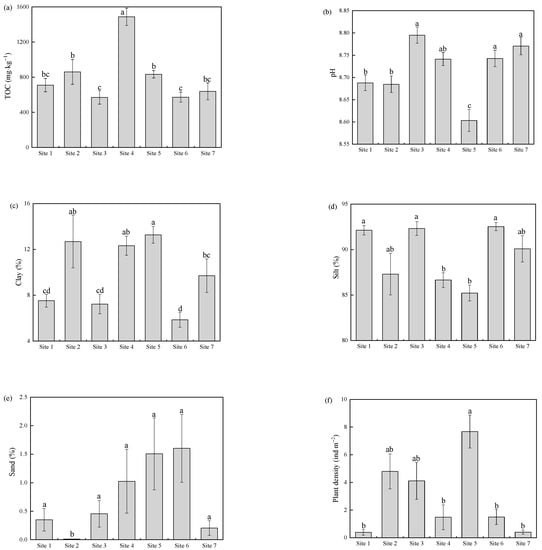 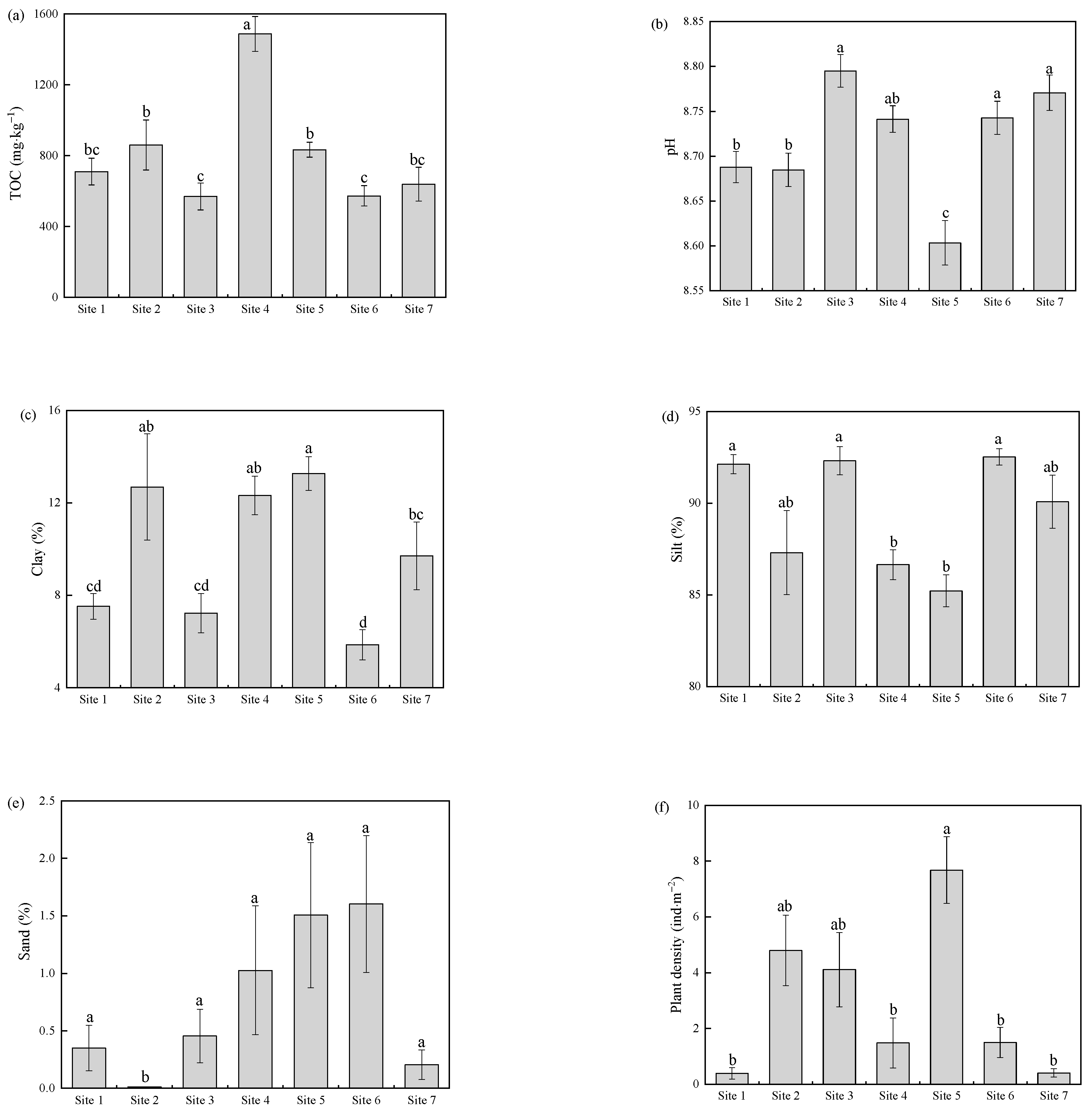 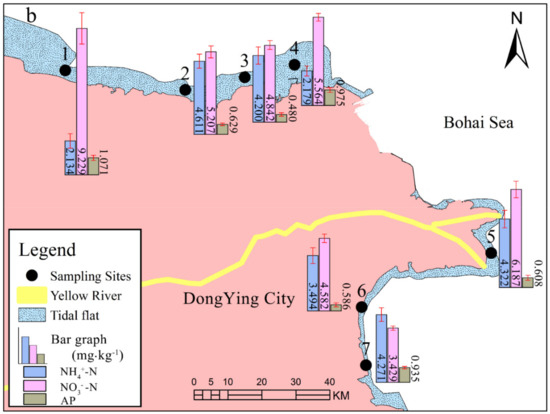 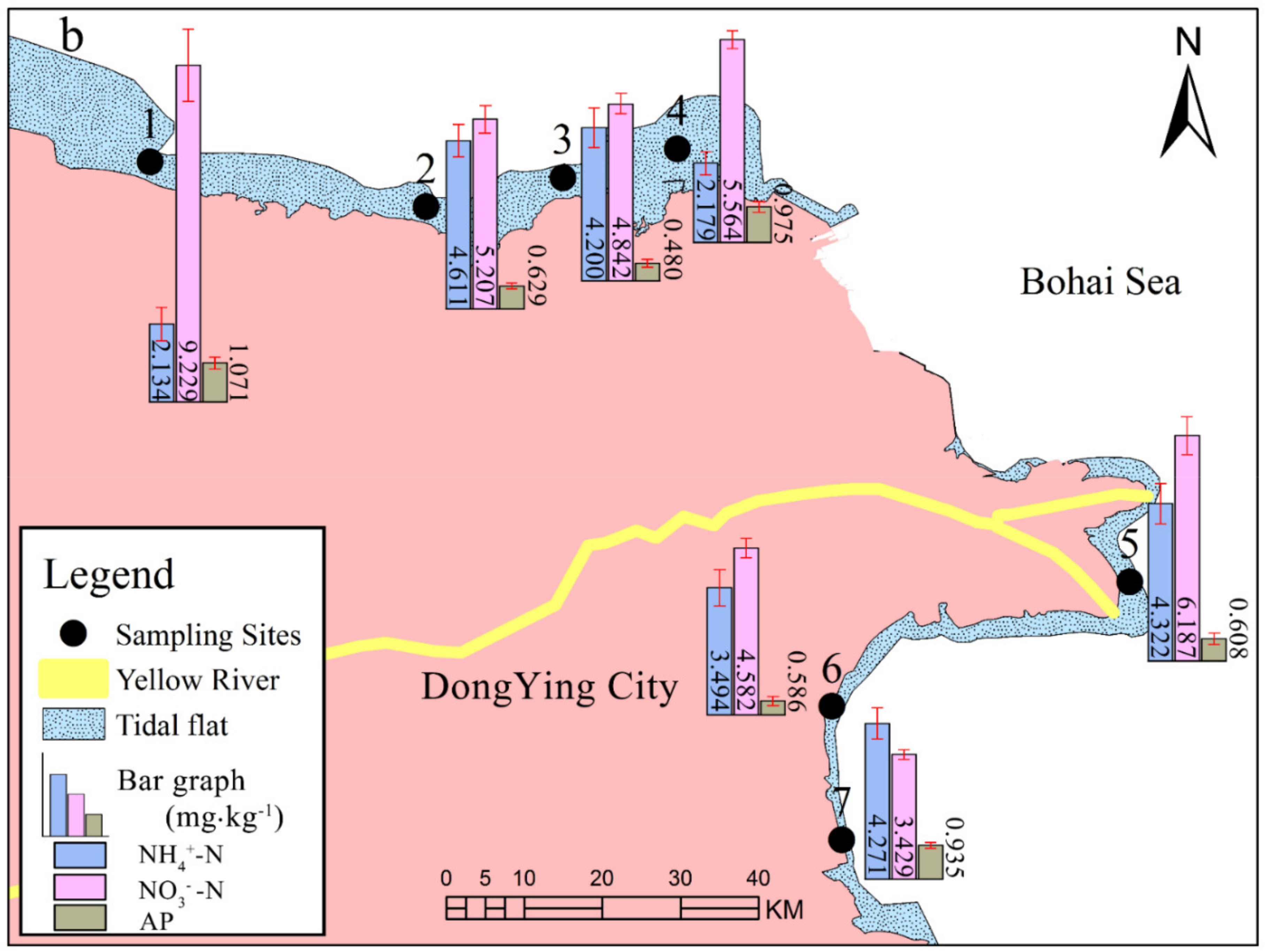 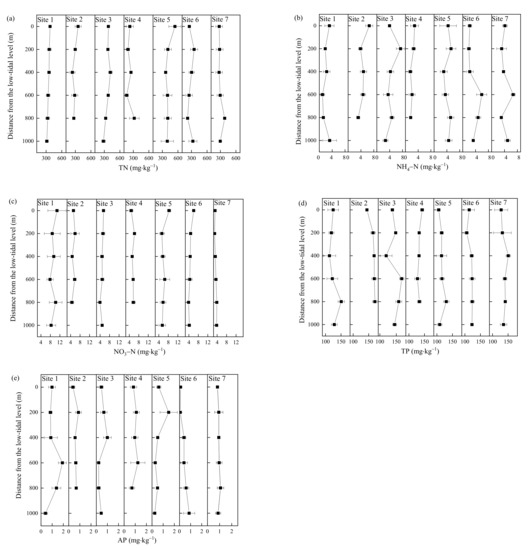