Impact Force of a Geomorphic Dam-Break Wave against an Obstacle: Effects of Sediment Inertia

The evaluation of the impact force on structures due to a flood wave is of utmost importance for estimating physical damage and designing adequate countermeasures. The present study investigates, using 2D shallow-water approximation, the morphodynamics and forces caused by a dam-break wave against a rigid obstacle in the presence of an erodible bed. A widely used coupled equilibrium model, based on the two-dimensional Saint–Venant hydrodynamic equations combined with the sediment continuity Exner equation (SVEM), is compared with a more complex two-phase model (TPM). Considering an experimental set-up presented in the literature with a single rigid obstacle in a channel, two series of tests were performed, assuming sand or light sediments on the bottom. The former test is representative of a typical laboratory experiment, and the latter may be scaled up to a field case. For each test, two different particle diameters were considered. Independently from the particle size, it was found that in the sand tests, SVEM performs similarly to TPM. In the case of light sediment, larger differences are observed, and the SVEM predicts a higher force of about 26% for both considered diameters. The analysis of the flow fields and the morphodynamics shows these differences can be essentially ascribed to the role of inertia of the solid particles. View Full-Text
Keywords: dam-break; impact force; mobile bed; Exner equation; two-phase model dam-break; impact force; mobile bed; Exner equation; two-phase model
►▼ Show Figures 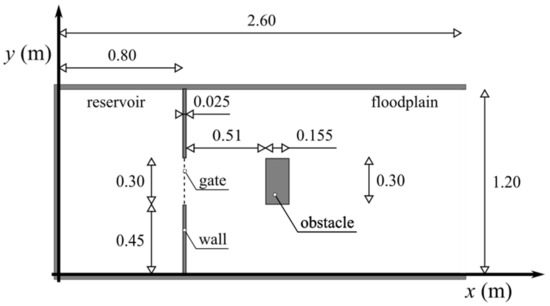