Reusing greywater (GW) can lower domestic water consumption. However, the GW must be treated and disinfected for securing user health. This research studied at the laboratory scale, and in flow-through setups, which are generally used in full-scale GW treatment the disinfection efficiency of the two commonly used technologies (a) chlorination and (b) low-pressure UV irradiation. The disinfection methods were studied under a commonly found range of total suspended solids (TSS; 3.9–233 mg/L) and 5-d biochemical oxygen demand (BOD5) concentrations (0–107 mg/L) as a representative/proxy of bioavailable organic matter. The negative effect of TSS began even at low concentrations (<20 mg/L) and increased consistently with increasing TSS concentrations across all the concentrations tested. On the other hand, the negative effect of BOD5 on FC inactivation was observed only when its concentration was higher than 50 mg/L. Multiple linear regression models were developed following the laboratory results, establishing a correlation between FC inactivation by either chlorination or UV irradiation and initial FC, TSS, and BOD5 concentrations. The models were validated against the results from the flow-through reactors and explained the majority of the variability in the measured FC inactivation. Conversion factors between the laboratory scales and the flow-through reactor experiments were established. These enable the prediction of the required residual chlorine concentration or the UV dose needed for an on-site flow-through reactor. This approach is valuable from both operational and research perspectives. View Full-Text
Keywords: BOD5; suspended solids; chlorination; UV disinfection; greywater; chlorine tablet; chlorine flow-through chamber; flow-through UV reactor BOD5; suspended solids; chlorination; UV disinfection; greywater; chlorine tablet; chlorine flow-through chamber; flow-through UV reactor
►▼ Show Figures 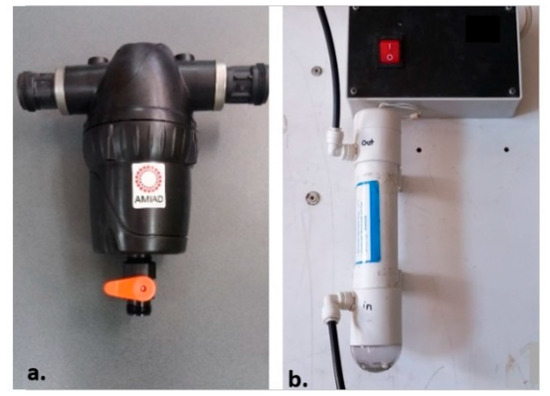