Leaching zones within potash seams generally represent a significant risk to subsurface mining operations and the construction of technical caverns in salt rocks, but their temporal and spatial formation has been investigated only rudimentarily to date. To the knowledge of the authors, current reactive transport simulation implementations are not capable to address hydraulic-chemical interactions within potash salt. For this reason, a reactive transport model has been developed and complemented by an innovative approach to calculate the interchange of minerals and solution at the water-rock interface. Using this model, a scenario analysis was carried out based on a carnallite-bearing potash seam. The results show that the evolution of leaching zones depends on the mineral composition and dissolution rate of the original salt rock, and that the formation can be classified by the dimensionless parameters of Péclet (Pe) and Damköhler (Da). For Pe > 2 and Da > 1, a funnel-shaped leaching zone is formed, otherwise the dissolution front is planar. Additionally, Da > 1 results in the formation of a sylvinitic zone and a flow barrier. Most scenarios represent hybrid forms of these cases. The simulated shapes and mineralogies are confirmed by literature data and can be used to assess the hazard potential. View Full-Text
Keywords: carnallite; water rock interaction; density-driven flow; PHREEQC; Pitzer equations carnallite; water rock interaction; density-driven flow; PHREEQC; Pitzer equations
►▼ Show Figures 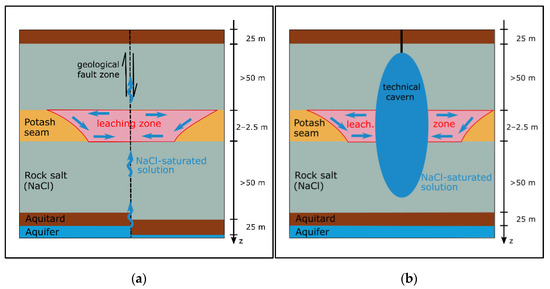