Flooding is currently one of the major threats to cities in Sub-Saharan Africa (SSA). The demographic change caused by the high rate of natural increase, combined with the migration toward cities, leads to a strong demand for housing and promotes urbanization. Given the insufficiency or absence of adequate planning, many constructions are installed in flood-prone zones, often without adequate infrastructure, especially drainage systems. This makes them very vulnerable. Our research consists of carrying out a spatiotemporal analysis of the agglomeration of Antananarivo (Madagascar). It shows that urbanization leads to increased exposure of populations and constructions to floods. There is a pressure on land in flood-prone zones due to the exponential growth of the population at the agglomeration level. Some 32% of the population of the Antananarivo agglomeration lived in flood-prone zones in 2018. An analysis of the evolution of built spaces from 1953 to 2017 highlights that urban expansion was intense over those years (6.1% yearly increase of built areas). This expansion triggered the construction of built areas in flood-prone zones, which evolved from 399 ha in 1953 to 3675 ha in 2017. In 2017, 23% of the buildings in the agglomeration, i.e., almost one out of every four buildings, were in flood-prone zones. A share of the urban expansion in flood-prone zones is related to informal developments that gather highly vulnerable groups with very little in terms of economic resources. Better integration of flood risk management in spatial planning policies thus appears to be an essential step to guide decisions so as to coordinate the development of urban areas and drainage networks in a sustainable way, considering the vulnerability of the population living in the most exposed areas. View Full-Text
Keywords: demographic change; urbanization; flooding; drainage system; vulnerability; Sub-Saharan Africa; Antananarivo demographic change; urbanization; flooding; drainage system; vulnerability; Sub-Saharan Africa; Antananarivo
►▼ Show Figures 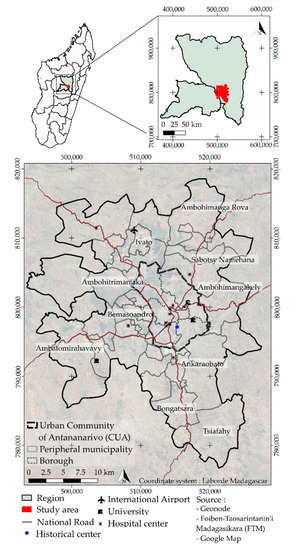