Effects of Water Depth on the Growth of the Submerged Macrophytes Vallisneria natans and Hydrilla verticillata: Implications for Water Level Management
Next Article in Special Issue

The Holocene History of the Diatom Community in a Small Water Body on Shemya Island (Aleutian Arc, USA): The Influence of Global and Local Environmental Changes
Previous Article in Journal

Genetic Signature of a Past Anthropogenic Transportation of a Far-Eastern Endemic Cladoceran (Crustacea: Daphniidae) to the Volga Basin

Most studies of water flea (Crustacea: Cladocera) invasions are concentrated on a few taxa with an obvious harmful influence on native ecosystems, while our knowledge of cases of anthropogenic introduction with not-so-obvious consequences, in most other taxa, is poor. We found in the Volga basin (European Russia) a population that contained D. curvirostris Eylmann, 1887 and its hybrids with D. korovchinskyi Kotov et al. 2021. The latter taxon is endemic to the Far East and it has appeared in the Volga basin as a result of past human-mediated transportation. The population from Bakhilovo is represented by two strongly different groups of the COI haplotypes belonging, respectively, to (1) D. curvirostris and (2) D. korovchinskyi. We detected SNPs in the position 60 of the HSP-90ex3 locus and in the 195 positions of 28S rRNA locus, which differentiate two species. Part of the specimens from Bakhilovo belonged to D. curvirostris s.str., demonstrating homozygote SNP sites in two loci, but two specimens had heterozygote SNP sites in both nuclear loci. They belong to D. curvirostris x korovchinskyi hybrids. Most morphological traits of the females were characteristic of D. curvirostris. We found in some specimens some characters which could suggest their hybrid status, but this opinion is a hypothesis only, which needs to be checked on more ample material. The exact hybrid system in this pond is not known. Moreover, we have no evidences of sexual reproduction of the hybrids; they could reproduce by parthenogenesis only as is known for hybrids of the D. pulex group, or continuously crossing with parents like some members of D. longispina group. However, poor parental D. korovchinskyi was not detected in the pond either morphologically or genetically. The exact vector of its past anthropogenic transportation to the Volga is unknown. Most probably, just ephippia of D. korovchinskyi were translocated replaced from the Khabarovsk Territory to the Samara Area somehow. This is the first report on hybrids within the D. curvirostris species complex. Here, we demonstrated that accurate studies with deep resolution increase the number of revealed cryptic invasions. We expect that the number of revealed cases of cryptic interspecific invasions will grow rapidly. View Full-Text
Keywords: anthropogenic introduction; non-indigenous species; Daphnia; Cladocera; Far East anthropogenic introduction; non-indigenous species; Daphnia; Cladocera; Far East
►▼ Show Figures 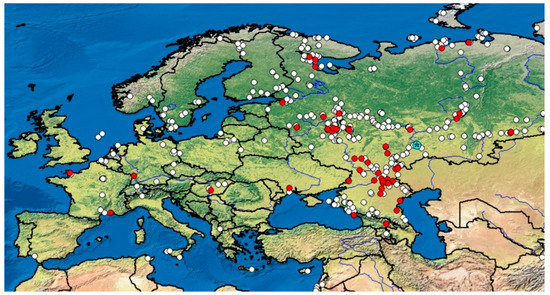 Dmitry P. Karabanov
Education: Yaroslavl State University, Faculty of biology and ecology, 1996–2001; postgraduate course of I.D.Papanin Institute for biology of inland waters, Russian Academy of Science, 2001–2004. Postgraduate thesis: “Genetic and biochemical adaptations of kilka Clupeonella cultriventris (Nordmann, 1840) when expending range” 2009, at the A.N. Severtsov Institute of ecology and evolution, Russian Academy of Science. Scientific interests: hydrobiology, biological invasions, genetics, adaptation.
Zoom | Orient | As Lines | As Sticks | As Cartoon | As Surface | Previous Scene | Next Scene
We use cookies on our website to ensure you get the best experience. Read more about our cookies here.
Accept
We have just recently launched a new version of our website. Help us to further improve by taking part in this short 5 minute survey here. here.
Never show this again