A New Normalized Groundwater Age-Based Index for Quantitative Evaluation of the Vulnerability to Seawater Intrusion in Coastal Aquifers: Implications for Management and Risk Assessments
Next Article in Special Issue

Spatial Patterns of Macromolecular Composition of Phytoplankton in the Arctic Ocean

From 31 July to 23 August 2014, 21 survey stations on the Chukchi Shelf and the Canada Basin were occupied onboard R/V Araon. The samples for the macromolecular components were collected from 10 stations of shelf area (hereafter, Chukchi Shelf) and 11 stations of basin area (hereafter, Canada Basin) during the cruise period (Figure 1). The physical data were obtained through CTD (a Sea-Bird 911+) at each station, and seawater samples were obtained by using rosette samplers. A vertical irradiance profile (photosynthesis active irradiance (PAR), 400–700 nm) was obtained using an LI-COR underwater optical sensor mounted on a CTD/rosette sampler to determine the light depth.

Seawater samples for nutrient measurements were obtained from different photic depths (100%, 30%, and 1% depths of surface PAR) determined from the underwater PAR sensor. Samples were collected from all of the corresponding light depths, and the surface water collected was used for 100% light treatment. The nutrient concentrations were measured immediately using an automatic nutrient analyzer (SEAL, QuAAtro, Norderstedt, Germany).
Total chlorophyll-a concentrations (Whatman GF/F filter, ø = 24 mm) were analyzed using the method in [33]. The filters (Whatman GF/F filter, ø = 24 mm) were immediately frozen at −80 °C in each petri dish wrapped in aluminum foil until chlorophyll-a extraction at Pusan National University, South Korea. All the samples for chlorophyll-a concentrations were extracted with 90% acetone at −5 °C for 24 h, and the concentrations were measured using a fluorometer (Turner Designs, 10-AU, San Jose, CA, USA), which was calibrated before the analysis.

Seawater samples (1L) were obtained from 100%, 30%, and 1% depths of surface PAR for the macromolecular concentration in the euphotic zone. The water sample was filtered through a 47-mm Whatman GF/F filter and then immediately stored at −80 °C until further analysis was performed at the home laboratory of Pusan National University. To extract CHO, PRT, and LIP, the phenol-sulfuric acid method [34], modified PRT method [35], and column method [36,37] were used, respectively. The detailed methods are available in [38].

3.4. Vertical Distribution of Macromolecular Concentration and Composition on the Chukchi Shelf

3.5. Vertical Distribution of Macromolecular Concentration and Composition in the Canada Basin

3.6. Temperature, Salinity, Nutrients, and Macromolecular Concentration along the Shelf/Basin Gradient

3.7. Spatial Distribution of the Macromolecular Composition

4.1. Major Controlling Factors for the Spatial Variation in Macromolecular Composition

In this study, the major macromolecule contributing to the overall average composition of phytoplankton was determined to be CHO on the Chukchi Shelf and the Canada Basin (Figure 7). It is interesting compared to those previously reported from the other regions of the polar oceans. For example, Yun et al. [27] observed a higher rate of LIP (58%) compared to CHO or PRT in the phytoplankton in the northern Chukchi Sea. In the Antarctic Ocean, Fabiano et al. [40,41] reported a high contribution, of 50% or more, of PRT to the total FM. Kim et al. [28] also found the high contribution of PRT (67%) to the macromolecular composition of phytoplankton in the Amundsen Sea due to the high concentrations of nitrate + nitrite. In general, the composition of PRT in the phytoplankton increases under nitrogen saturation conditions [40,42]. When the nitrogen or phosphorus is limited, triglycerides, which are energy stores, increase and are converted from PRT metabolism to LIP or CHO metabolisms [23,43,44]. Since CHO and LIP are not nitrogen-derived substrates, the accumulation of these storage compounds can be a reaction mechanism under nitrogen-deficient conditions [45]. In particular, LIP acts as a secondary storage material for the survival of long-term nitrogen conditions due to the fat synthetase system [46]. Thus, photosynthesis products are converted from CHO to LIP synthesis in a nitrogen-depleted environmental condition for an extended period [45,46], even though preferred accumulation in CHO or LIP compounds as a reservoir appears to be specific to species [45]. Some oily diatom species assimilate LIP as a major storage component under nitrogen or silicon restrictions [47,48]. Indeed, Ahn et al. [31] observed a sharp increase in LIP concentration with an increase in micro-phytoplankton in the Arctic Ocean. However, Harrison et al. [49] and Wear et al. [50] reported that diatoms have a relatively constant LIP under nitrogen deficiency while rapidly increasing CHO content and decreasing PRT. Therefore, the high CHO and moderate LIP compositions in the present study might have been due to the deficient nutrient conditions, which is consistent with previous findings [49,51], while PRT production predominates under nitrogen-rich conditions [40,42]. Consequently, it implies that major inorganic nutrients, especially nitrogen, are important controlling factors for the macromolecular composition of phytoplankton.
During the cruise, the phytoplankton in the Canada Basin were observed to have a significantly lower PRT (8.7%) compared to that of the Chukchi Shelf. This might be related to different conditions of nutrient limitation. Normally, nutrient deficiency can be indicated following as; nitrogen limit condition with N/P ratio with < 10 and Si/N ratio > 1, phosphorus restriction under N/P ratio > 22 and Si/P ratio > 22, and silicon limitation in Si/N ratio < 1 and Si/P ratio < 10 [52]. In terms of macromolecular composition, values with a higher PRT/CHO ratio (>1) are observed in the areas with high productivity or nitrogen-rich blooms [40], while the lower ratios (<1) are in nitrogen deficiency conditions [39]. Thus, low N/P ratios, PRT/CHO ratios, and PRT/LIP ratios indicate that nitrogen is particularly limited in the environment. In this study, the average molar ratio of (NO3 + NO2 + NH4):PO4 and SiO2:(NO3 + NO2 + NH4) in the euphotic zone was 3.0:1 and 3.9:1 on the Chukchi Shelf, respectively, and 3.4:1 and 2.8:1 in the Canada Basin, respectively. Overall, the ratio of N/P was significantly lower than the Redfield ratio [53]. The PRT/CHO ratio and PRT/LIP ratio of the Canada Basin are 0.16 and 0.33, respectively, which are significantly lower (t-test, p < 0.05) than the PRT/CHO ratio (0.68) and PRT/LIP ratio (1) of the Chukchi Shelf. These results elucidate that the deficiency of nitrogen in the study area was present during the cruise, and it was especially noticeable that the nitrogen utilization by the phytoplankton in the Canada Basin was severely restricted. Therefore, the substantially low PRT composition of phytoplankton in the Canada Basin could be caused by the result of severe nitrogen deficiency during phytoplankton growth.
According to Suárez et al. [54], the light condition could act as an important factor for determining different macromolecular compositions of phytoplankton. The macromolecular composition of phytoplankton can vary depending on the amount of light [55,56]. For example, an increase in PRT is observed with a decrease in light intensity because of the lower illuminance saturation level of PRT in comparison to other macromolecules [54,57]. In contrast, the productions of CHO and LIP as storage materials can be observed under an excessive energy supply condition [54,58]. Suárez et al. [54] also reported that lower irradiance was more relevant in PRT synthesis than in LIP synthesis. However, no distinct pattern of macromolecular compositions was observed among three different light depths in this study (mentioned in Section 3.7), although the relatively higher protein concentrations were observed at deeper depths (30% and 1% light levels) than at the surface. In addition, the stations in the ice-covered Canada Basin showed significantly low PRT composition, even though it was thought to be a low light condition (Figure 5). Thus, we could conclude that the light condition might be insignificant in controlling the macromolecular composition during this study period.

4.2. The Implication of Macromolecular Composition as Energy Content Aspect

This research was a part of the project titled “Korea-Arctic Ocean Warming and Responses of Ecosystem (K-AWARE, KOPRI, 1525011760)”, funded by the Ministry of Oceans and Fisheries, Korea.

We thank the captain and crew of the ARAON for their outstanding assistance during the cruise. 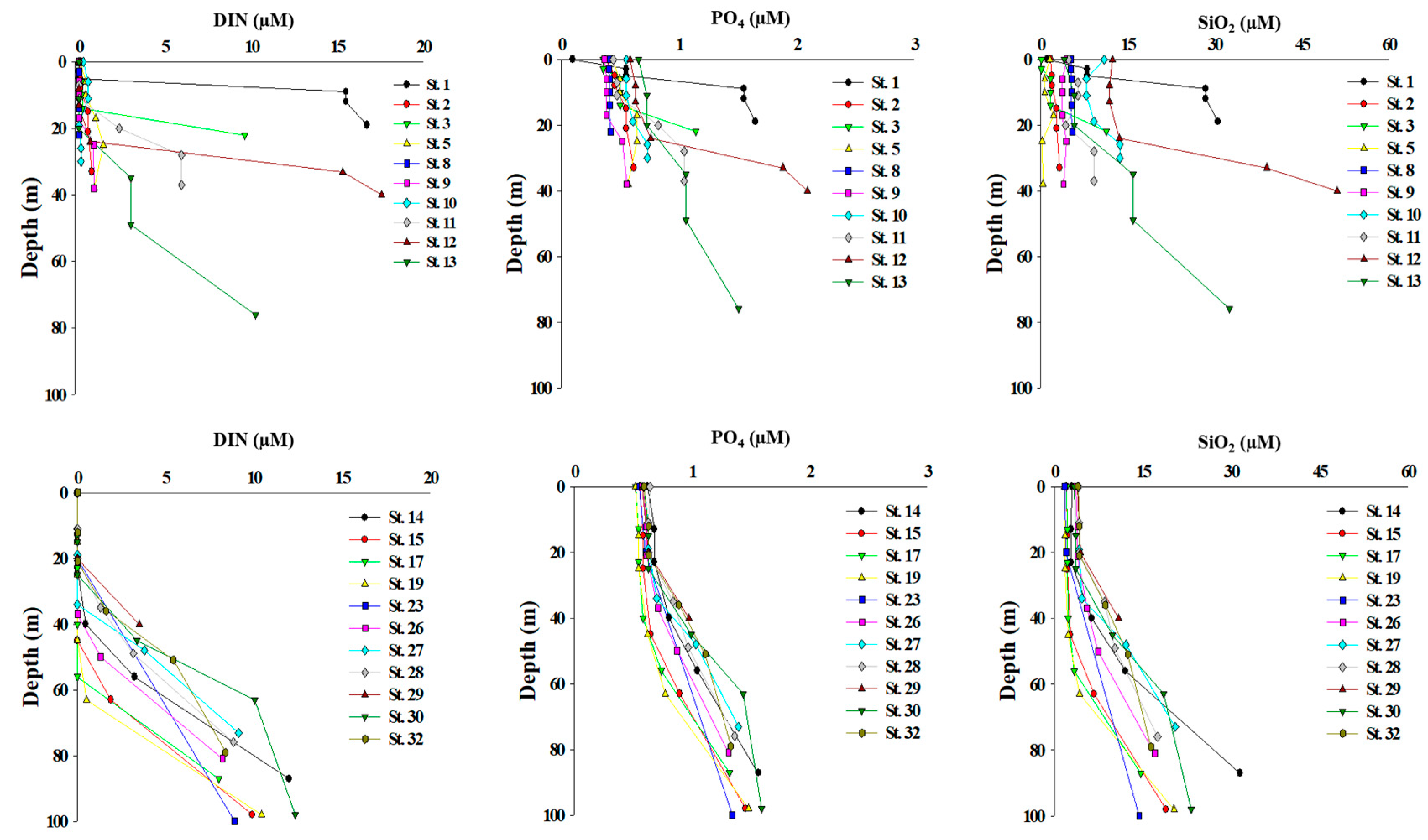 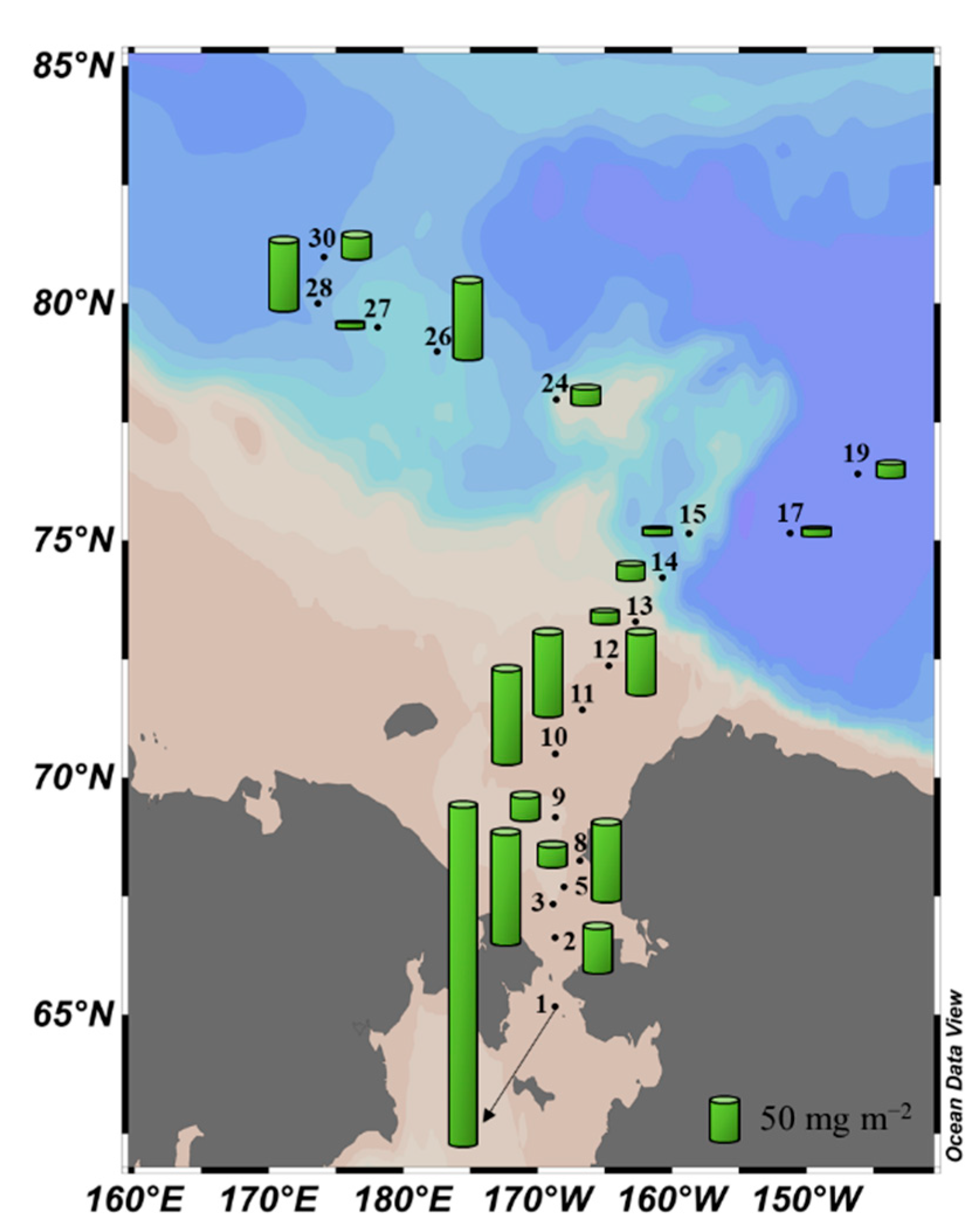 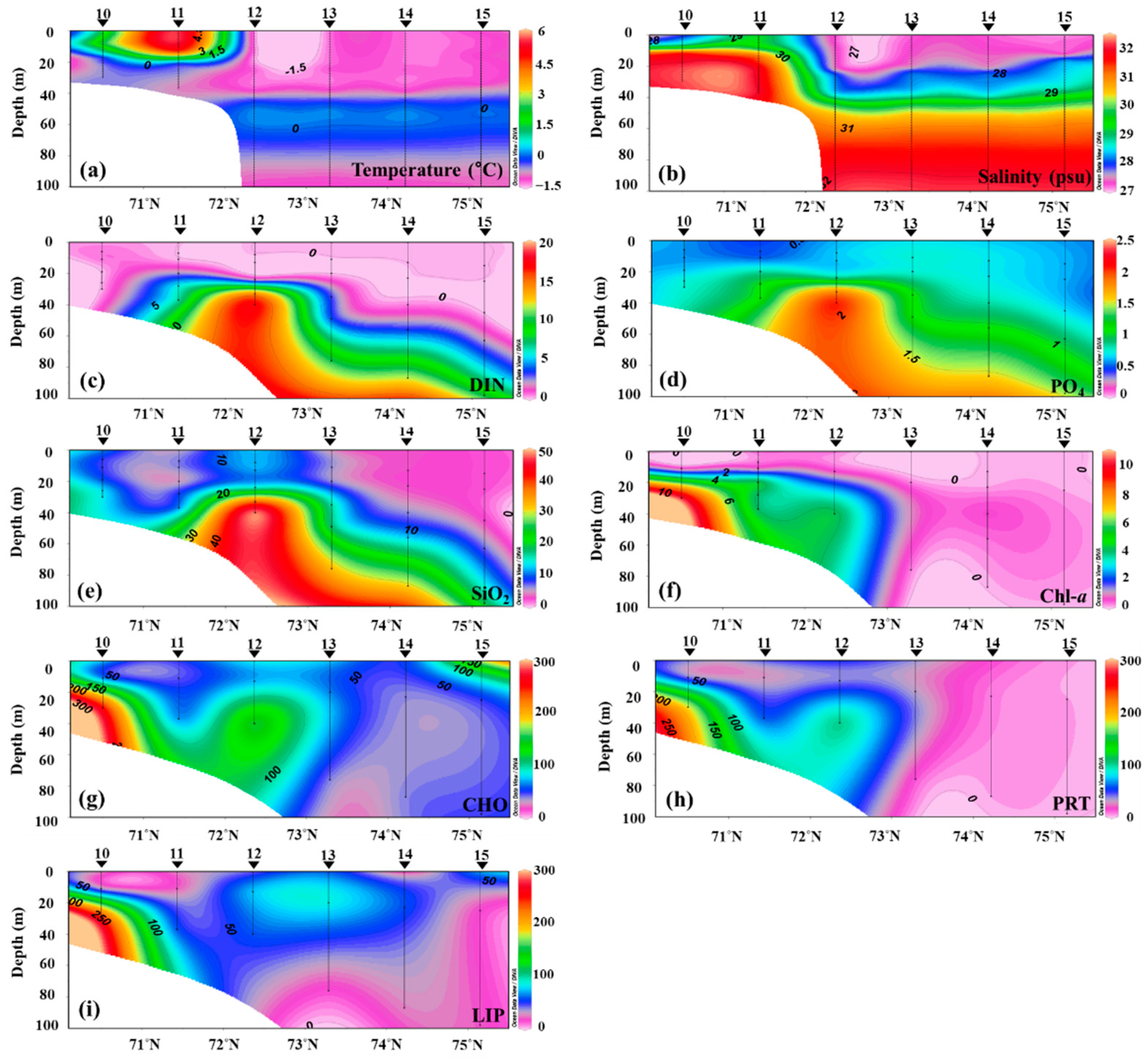