This work aimed to achieve partial nitrification (PN) in a Sequencing Moving Bed Biofilm Reactor SMBBR with zeolite as a biomass carrier by using sulfide pulses in the presence of organic matter as an inhibitor. Two conditions were evaluated: sulfide (HS−) = 5 mg S/L and vvm (air volume per liquid volume per minute, L of air L−1 of liquid min−1) = 0.1 (condition 1); and a HS− = 10 mg S/L and a vvm = 0.5 (condition 2). The simultaneous effect of organic matter and sulfide was evaluated at a Chemical Oxygen Demand (COD) = 350 mg/L and HS− = 5 mg S/L, with a vvm = 0.5. As a result, using the sulfide pulse improved the nitrite accumulation in both systems. However, Total Ammonia Nitrogen (TAN) oxidation in both processes decreased by up to 60%. The simultaneous presence of COD and sulfide significantly reduced the TAN and nitrite oxidation, with a COD removal yield of 80% and sulfide oxidation close to 20%. Thus, the use of a sulfide pulse enabled PN in a SMBBR with zeolite. Organic matter, together with the sulfide pulse, almost completely inhibited the nitrification process despite using zeolite. View Full-Text
Keywords: sulfide doses; NOB inhibition; organic matter; AOB inhibition; zeolite sulfide doses; NOB inhibition; organic matter; AOB inhibition; zeolite
►▼ Show Figures 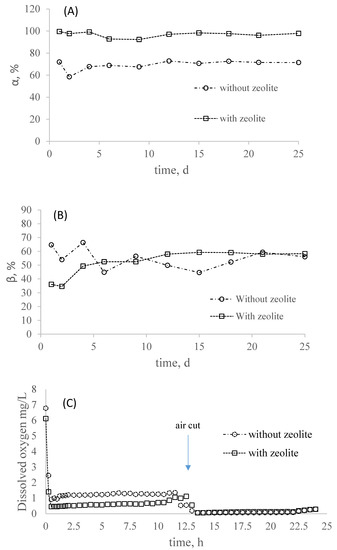 César Huiliñir
Associated professor at the Chemical Engineering Department of the University of Santiago of Chile, PhD in Chemical Engineering (2009) and with a post-doc in the Technical University of Berlin (2009-2010). His field of research is the application of biological processes to the treatment and reuse of industrial waste, with several research projects (5 FONDECYT project) in the last 8 years. He has special interest in nutrient removal including modeling of biofilm reactors and anaerobic digestion of solid and wastewater. He has 30 WoS publications in the last 5 years, 10 participations in national and international congress, 2 book chapters and 1 patent. He currently is director of the Master's programme in Environmental Engineering of the University of Santiago of Chile and he directs 3 Ph.D. students in Engineering Sciences, Mention Process Engineering of the University of Santiago de Chile. He is part of the IWA (International Water Association) network.
Zoom | Orient | As Lines | As Sticks | As Cartoon | As Surface | Previous Scene | Next Scene
We use cookies on our website to ensure you get the best experience. Read more about our cookies here.
Accept
We have just recently launched a new version of our website. Help us to further improve by taking part in this short 5 minute survey here. here.
Never show this again