Towards a Comprehensive Assessment of Statistical versus Soft Computing Models in Hydrology: Application to Monthly Pan Evaporation Prediction
Previous Article in Journal

The Wangmaogou (WMG) catchment (110°20′26″–110°22′46″ E, 37°34′13″–37°36′03″ N), located in Suide County, in the hilly and gully area of the Loess Plateau, China, was chosen for this study (Figure 1a). This catchment has an area of 5.97 km2 with a main channel length of 3.75 km and an altitude ranging from 934.55 to 1187.75 m [28]. Loess soil is the most widely distributed soil in the studied catchment, with the characteristics of developed vertical joints, uniform particles, low clay content, and weak cementation between soil particles [29]. The average annual evaporation is 1519 mm, while the average yearly precipitation is 475.10 mm. Although precipitation varies yearly, it is distributed unevenly throughout the year. The rainfall from July to September accounts for 65% of the annual rainfall. Here, check dams are used as a key part of the management strategy to conserve soil and water. There are 23 check dams in the WMG catchment at present, and 16 of them can run normally with residual storage to trap sediments, and these 16 dams encompass 2 key check dams, 6 middle check dams and 8 small check dams, as shown in Figure 1b. Details of the check dam system are shown in Table 1.

The land use in the studied catchment was visually interpreted from Google images and was divided into ten land use types (Figure 1c). The statistics of the different land-use types are provided in Table 2. The digital elevation model (DEM) of the catchment was derived from a 1:1000 topographic map.
The rainfall and runoff data for the studied catchment were obtained from the Suide Soil and Water Conservation Monitoring Experimental Station. The rainfall-runoff process of the rainstorm event that occurred on 26 July 2017 was selected for the simulation in this study. The rainstorm began at 00:00 on 26 July 2017 and ended at 08:30 on 26 July 2017. The rainfall lasted for 8 h and 30 min, with a total rainfall of 169.9 mm and an average rainfall intensity of 19.99 mm/h. The rainfall distribution process is shown as Figure 2.

The runoff generation process was calculated by the SCS-CN model developed by the Soil Conservation Service of the United States Department of Agriculture. The SCS-CN method is based on a water balance and two fundamental hypotheses, which can be expressed as [33] where is the precipitation, mm; is the initial abstraction, mm; is the cumulative infiltration excluding , mm; is the direct runoff, mm; and is the potential maximum retention after the beginning of the runoff, mm.
Combining Equations (8)–(10) gives an expression for
Equation (11) is valid for , otherwise, . The parameter in Equation (11) is defined as where depends on soil type, land use, and antecedent moisture conditions.
The Soil Conservation Service of the United States Department of Agriculture provided a tabulation for the values of under different conditions, in which the value of can be found according to the soil type and land use type. Then, the antecedent soil moisture is used to determine which level the belongs to; namely, drought (AMCI), general (AMCII) and wet (AMCIII). Finally, the value of is adjusted with the conversion formula [34].
The soil type in the studied catchment is loessal soil, which belongs to class B according to the SCS hydrologic soil groups. Before the rainstorm on 26 July 2017, the cumulative rainfall in the first 5 days was 2.2 mm, and the antecedent moisture condition was AMCI. According to the tabulation of values provided by the Soil Conservation Service of the United States Department of Agriculture and the adjustment with the conversion formula, the value of in the studied catchment under the condition of AMCI was obtained as shown in Figure 5, and the values of of each subcatchment are listed in Table 3.

The runoff concentration processes in the channels were calculated with the one-dimensional Saint Venant formulas in this study. The calculations are based on several basic assumptions: the fluid is incompressible and isotropic; the slope of the riverbed is small; the flow pattern is one-dimensional flow; the hydrostatic pressure is uniform distribution; and the flow condition is subcritical flow [36].
The continuity formula and the momentum formula of the one-dimensional Saint Venant formulas are as follows: where is the discharge, m3/s; is the chainage, m; is the cross-sectional area, m2; is the time, s; is the lateral inflow, m3/s; is the gravitational acceleration, m/s2; is the water level, m; is the Chezy coefficient, m0.5/s; and is the hydraulic radius, m.
The drainage process of the spillway was calculated as the broad crested weir, and the drainage process of the intake terrace on the slope is calculated with a formula suggested by the “Technical code of key dam for soil and water conservation” [31]. The drainage process of the perforated riser principal spillway was calculated with the formulas shown in Section 3.1 and was taken into the runoff concentration calculation as the depth-discharge curve.

In this study, the efficiency of the model was evaluated by the flood peak deviation (), determination coefficient (R2), and Nash efficiency coefficient (NSE), with Equations (18)–(20) [37,38,39]: where and are the measured and average runoff, m3/s, respectively, while and are the simulated and average runoff, m3/s, respectively.
The closer R2 was to 1, the higher the degree of coincidence of the simulated runoff process. Moriasi, et al. [40] summarized that a simulated result could be considered perfect if its NSE equals 1, very good if its NSE falls between 0.75 and 1, good if NSE falls between 0.65 and 0.75, satisfactory if its NSE falls between 0.5 and 0.65 and unsatisfactory if the NSE is less than 0.5.

4.2. Rainfall-Runoff Process in the Catchment

4.2.1. Calibration and Sensitivity Analysis of the Model Parameters

4.2.2. Effects of Perforated Riser Principal Spillways on the Simulation Accuracy of Flood Processes

This work was supported by the Research Fund of the State Key Laboratory of Eco-hydraulics in Northwest Arid Region, Xi’an University of Technology (Grant No. 2018KFKT-1); the Natural Science Foundation of Shaanxi Province (2017JZ013); the Leadership Talent Project of Shaanxi Province High-Level Talents Special Support Program in Science and Technology Innovation (2017); the National Natural Science Foundation of China (51679197, 41330858 and 51679193).

All data, models, and code generated or used during the study appear in the submitted article. 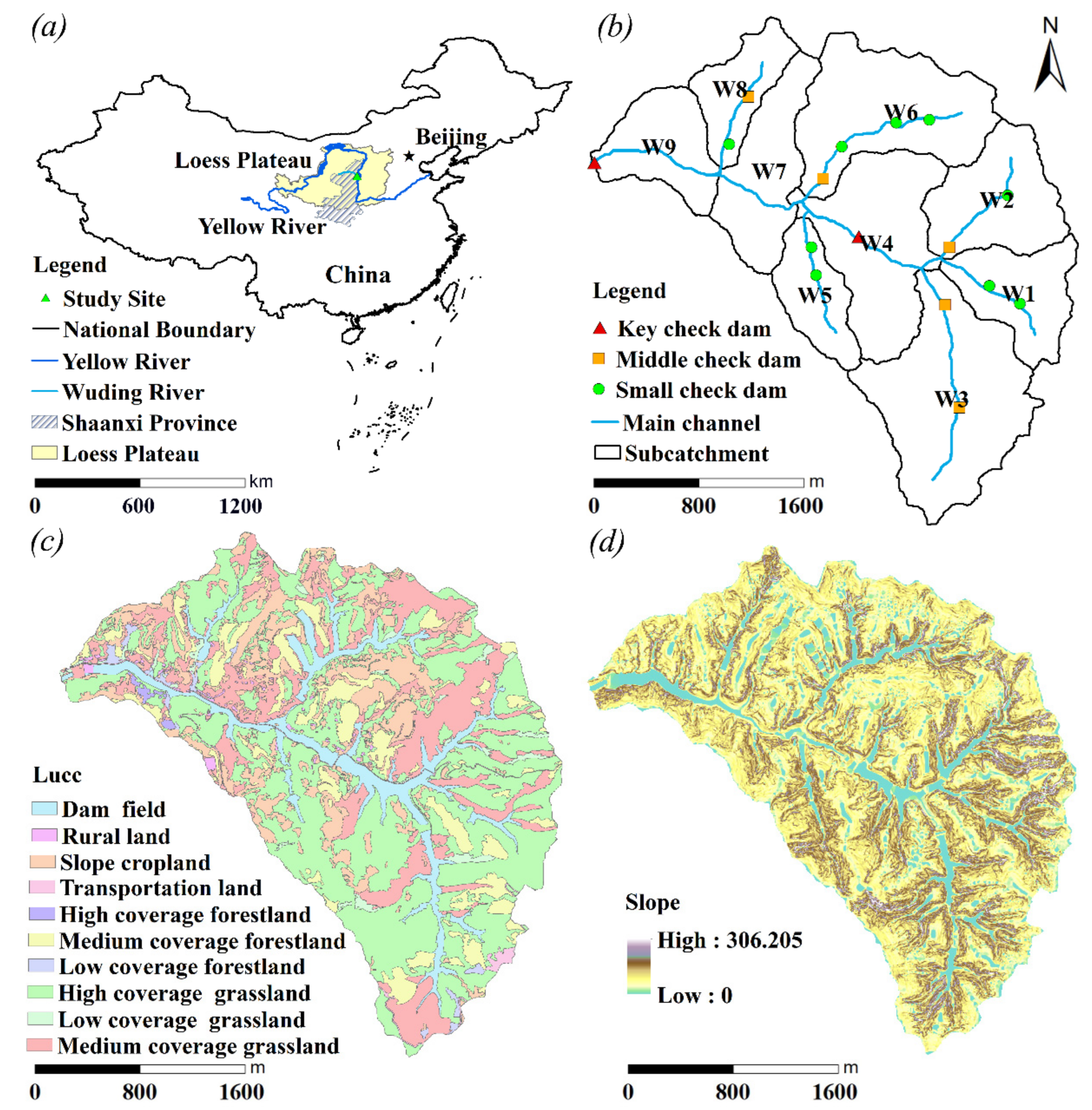 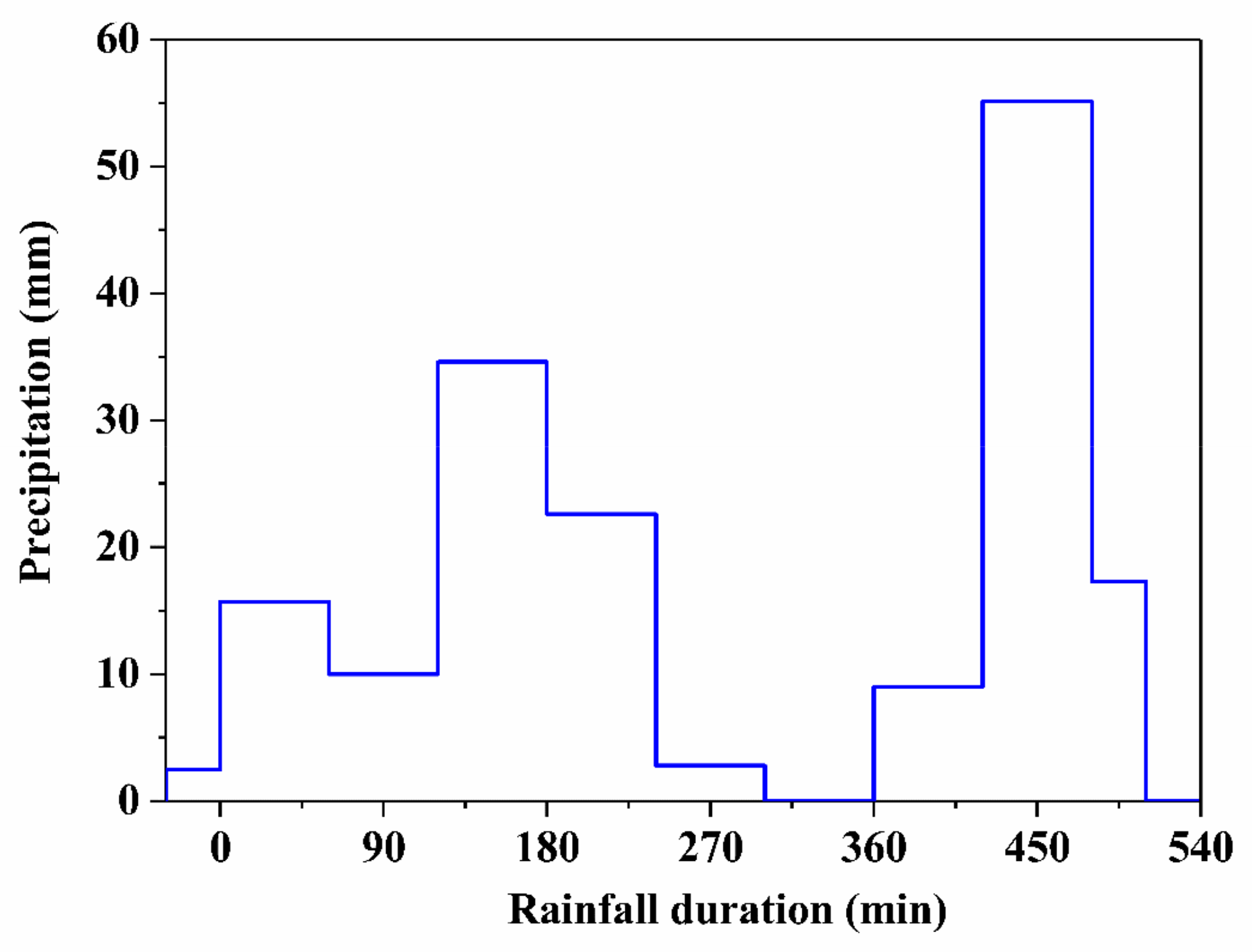 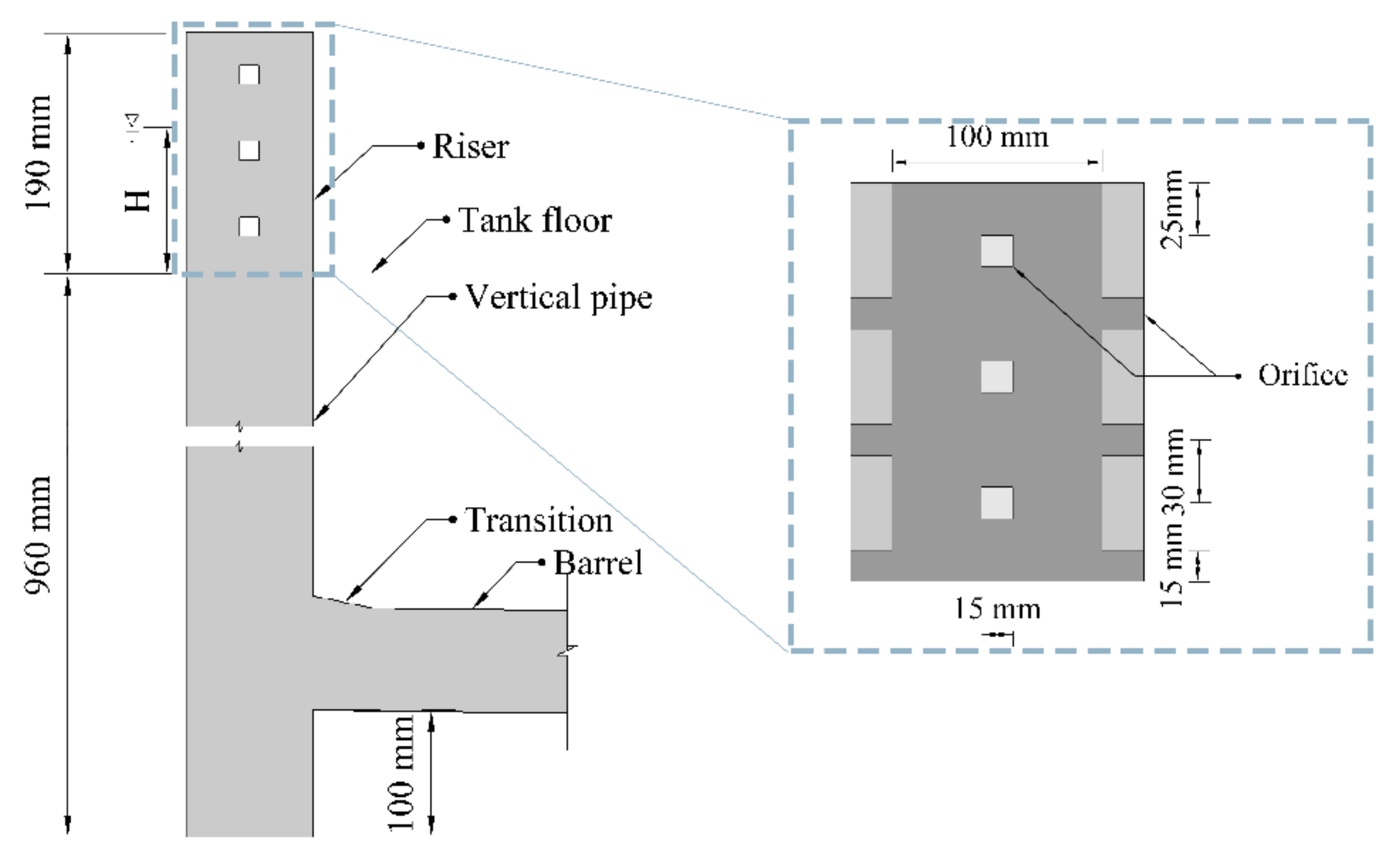 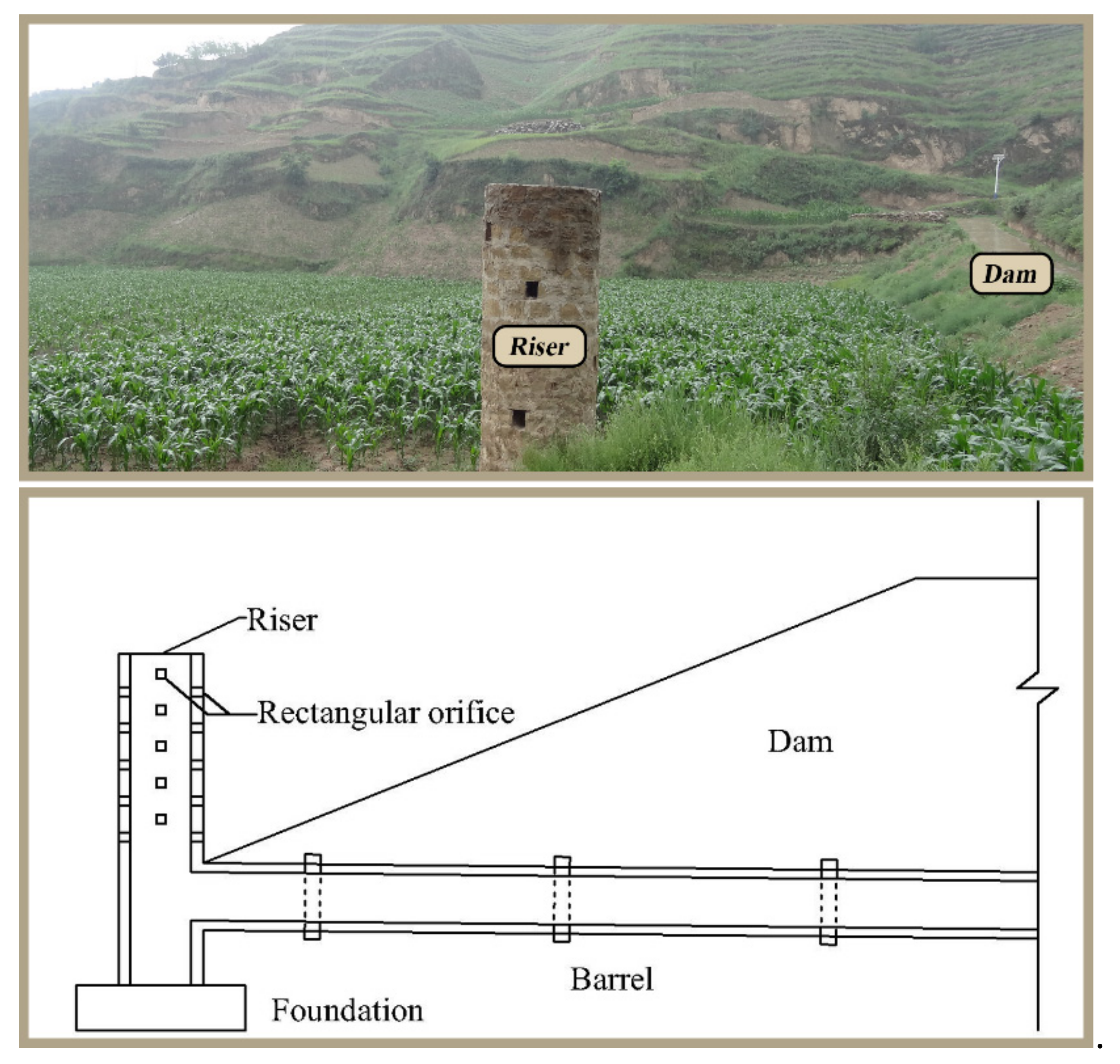 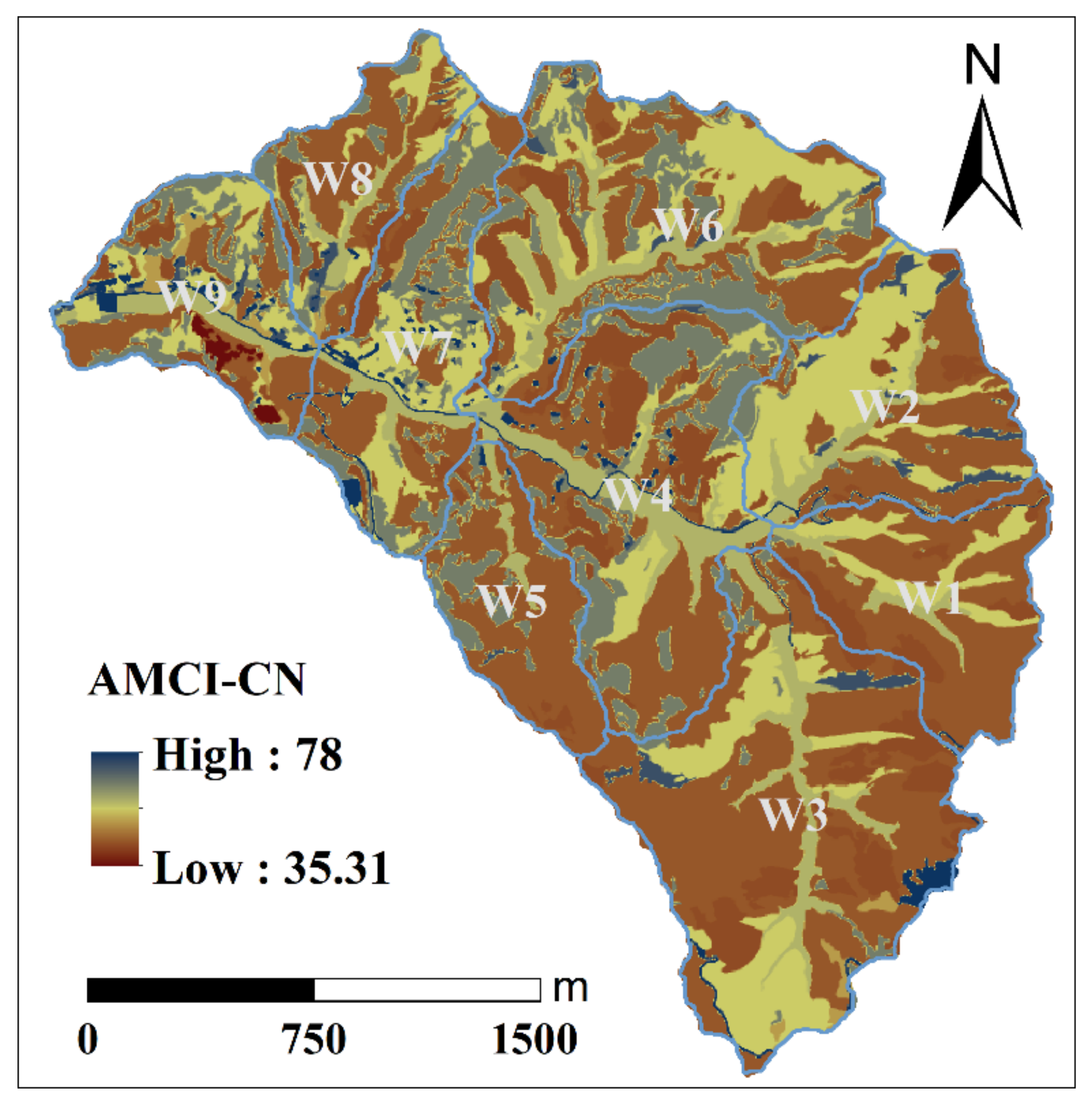 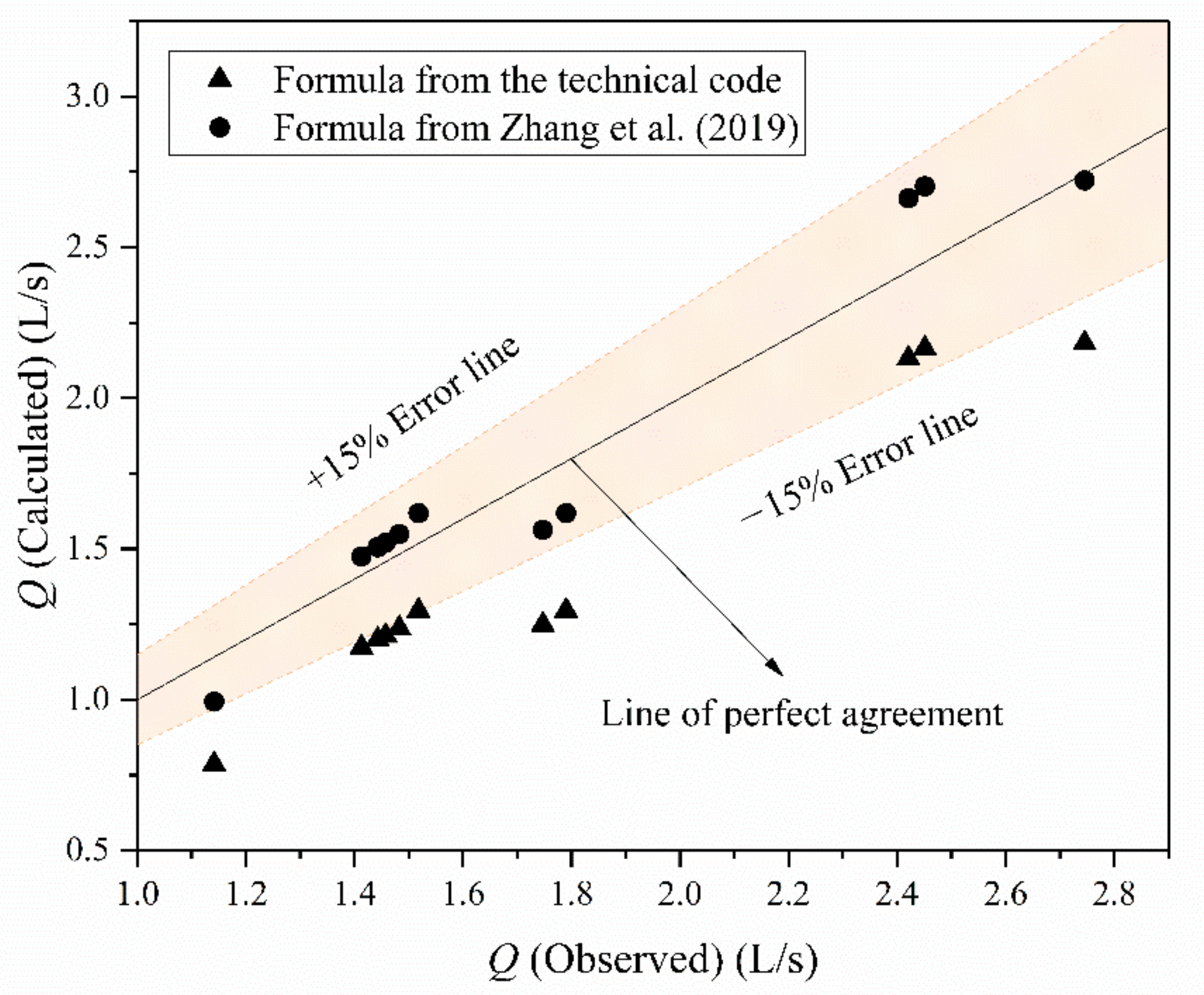 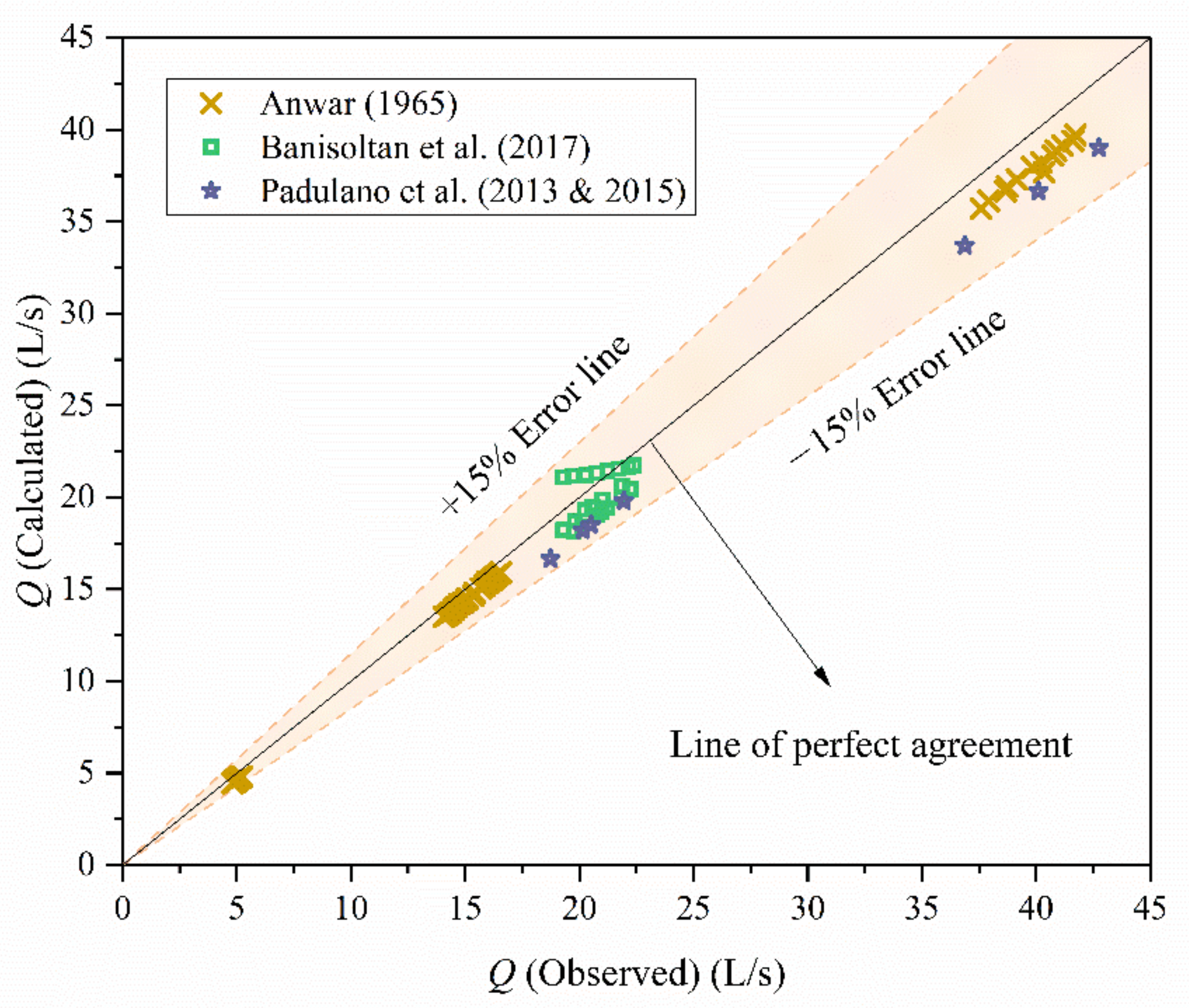 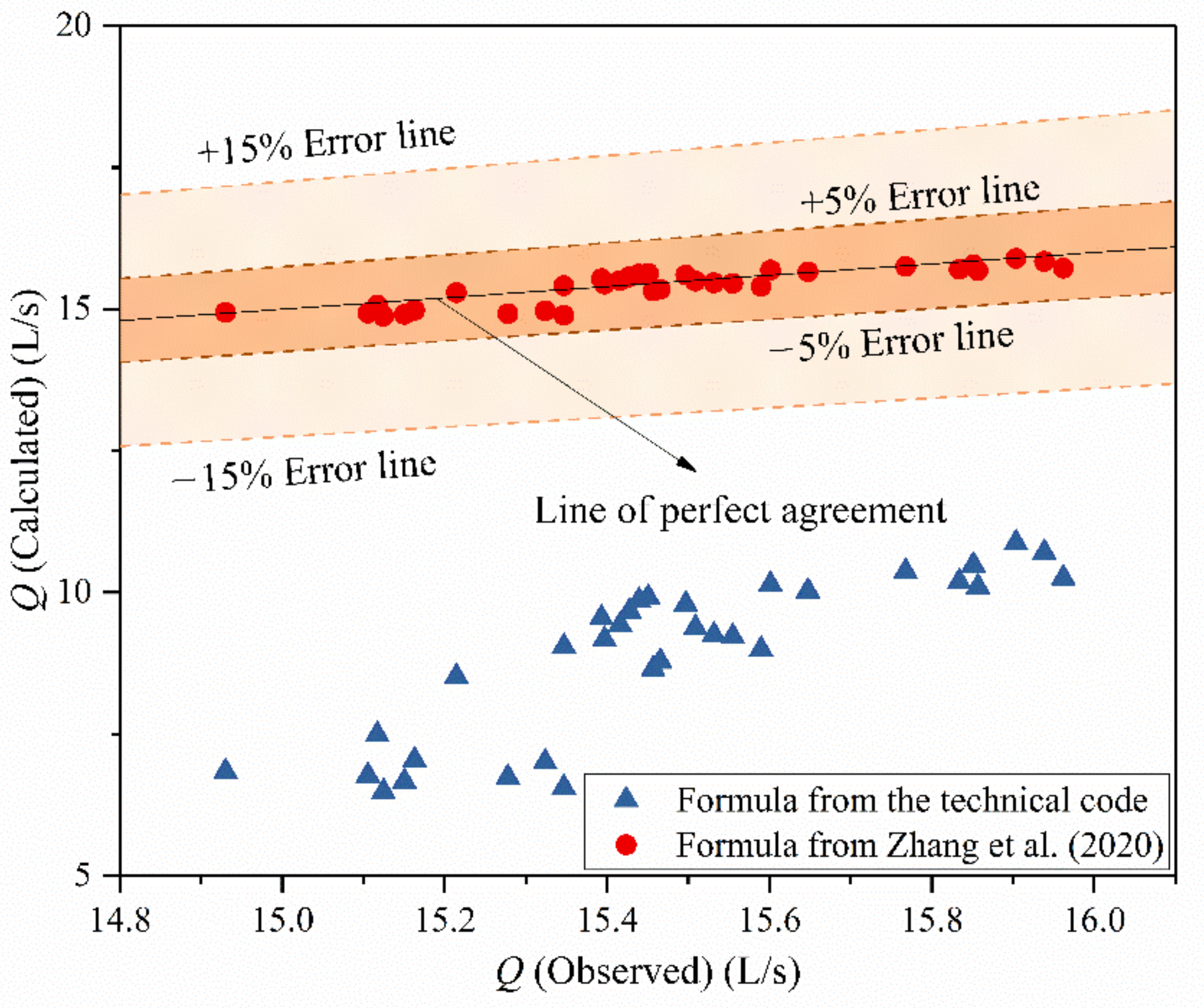 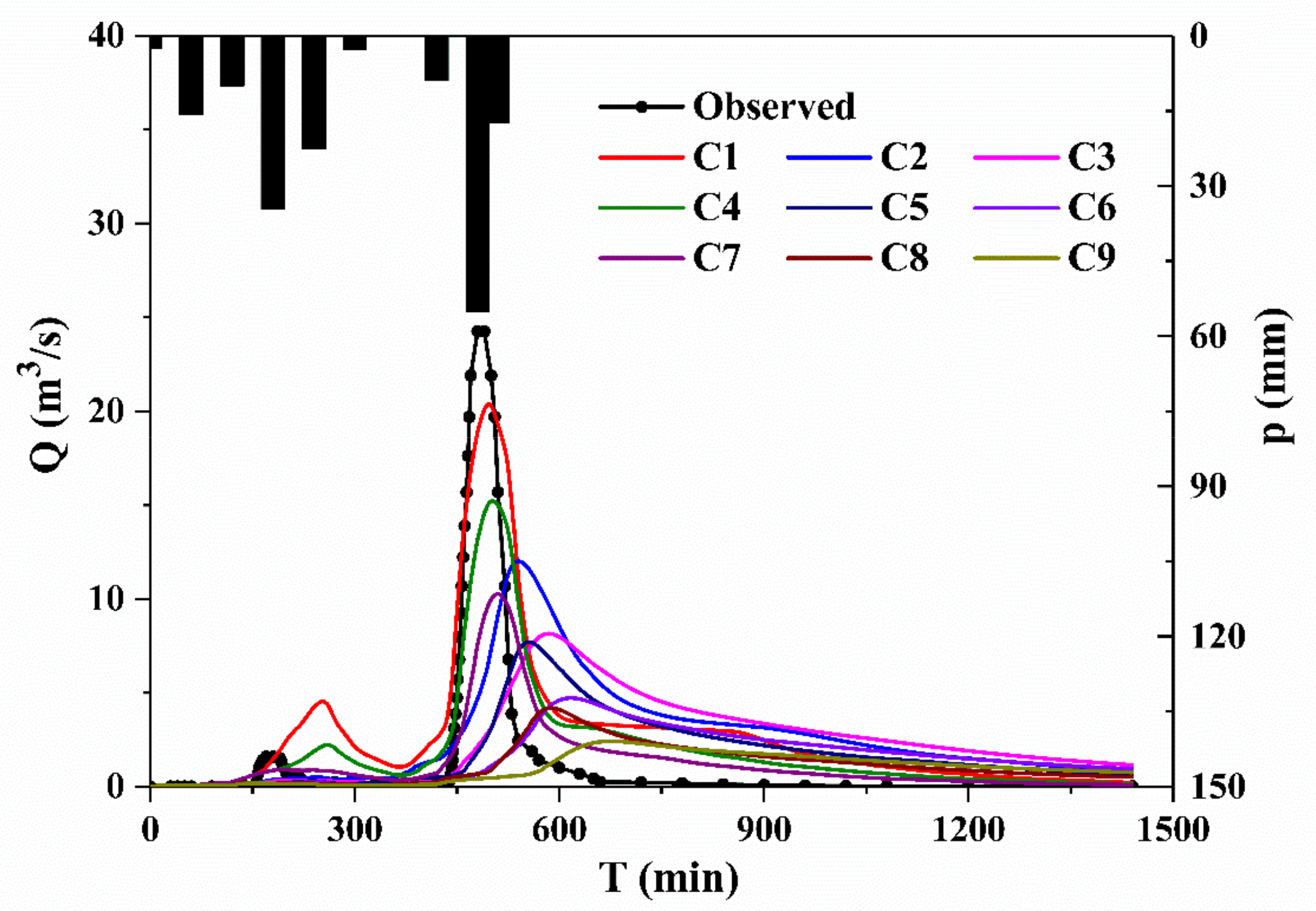 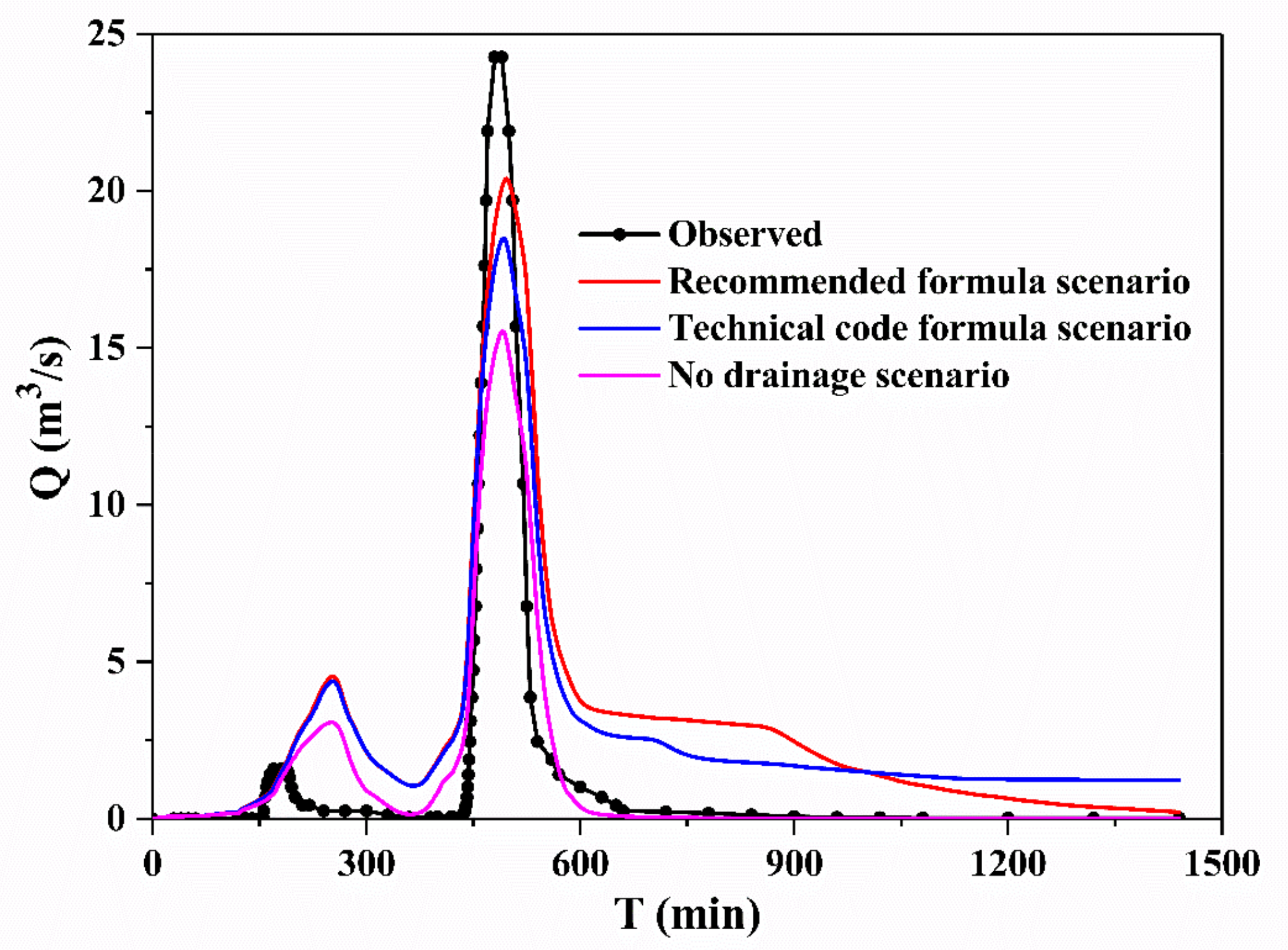