Preparation of Synthetic Clays to Remove Phosphates and Ibuprofen in Water

The main objective of this study consists in the synthesis of a layered double hydroxide (LDH) clay doped with magnesium and aluminum in order to test the removal of phosphates and ibuprofen in water. Two different LDH composites are assessed: oven-dried (LDHD) and calcined (LDHC). Single adsorptions of phosphate and ibuprofen showed up to 70% and 58% removal in water, when LDHC was used. A poorer performance was observed for LDHD, which presented adsorption efficiencies of 52% and 35%, respectively. The simultaneous removal of phosphate and ibuprofen in water showed that LDHC allows a greater reduction in the concentration of both compounds than LDHD. Phosphate adsorption showed a close agreement between the experimental and theoretical capacities predicted by the pseudo-second-order model, whereas ibuprofen fitted to a first-order model. In addition, phosphate adsorption showed a good fit to an intraparticle diffusion model and to Bangham model suggesting that diffusion into pores controls the adsorption process. No other mechanisms may be involved in ibuprofen adsorption, apart from intraparticle diffusion. Finally, phosphate desorption could recover up to 59% of the initial concentration, showing the feasibility of the recuperation of this compound in the LDH.
Keywords: eutrophication; hydrotalcite; adsorption; kinetics eutrophication; hydrotalcite; adsorption; kinetics

Synthesis of LDH was carried out by co-precipitation of mixed solutions of 7.785 g of and 3.727 g of in a 3:1 molar ratio. These solutions were added at a constant rating of 1 mL/min on a NaOH solution, stirred at 550 rpm. pH (HANNA, Edge pH) was monitored and corrected to a value of 10. Once the solutions were completely mixed, they were kept at continuous stirring for 4 h. The obtained dispersion was aged for 18 h, then filtered, washed, and oven-dried at 100 °C for 24 h. Finally, the synthesized composites were ground to attain 0.5–1.0 mm size. This compound was named in this study as oven-dried LDH, assigning it the acronym LDHD.
Additionally, a fraction of this composite was subjected to calcination in a muffle for 2 h at 600 °C in order to evaluate the effect of calcination on the pollutant retention (named in this case as LDHC). A flowchart of the methodology followed in this study is shown in Figure 1.

Reagents employed in this study (AlCl3, MgCl2, NaOH, KH2PO4·H2O, and ibuprofen) were purchased from Sigma Aldrich. To assess the adsorption of an organic and an inorganic compound by each LDH composite, different initial concentrations of phosphate and ibuprofen solutions were tested, varying the concentration from 2.5 to 20 mg/L.

Adsorption experiments were carried out in 100 mL Erlenmeyer flasks placed in orbital shakers at room temperature and 150 rpm shaking speed. Different experiments were carried out to compare the efficiency of oven-dried (LDHD) or calcined hydrotalcite (LDHC). Given the efficiency observed in the literature [37,38], a high solid:liquid ratio was tested and, thus 1:200 (w/v) was analyzed both for phosphates and ibuprofen, and the time of treatment was set at 42 min based on a set of preliminary results carried out. Experiments were performed with solutions of phosphate and ibuprofen separately. Finally, an adsorption experiment was tested with a solution of both compounds. Then, the samples were taken, and the dispersions were filtered by a microsyringe (0.45 μm). To determine the phosphate concentration of the filtrate, it was selected a wavelength of 690 nm in a spectrophotometer (model UV/VIS Spectrometer Lambda XLS, PerkinElmer, Waltham, MA, USA), determined by the molybdenum blue method. Ibuprofen was measured in filtered samples at a wavelength of 220 nm in the spectrophotometer. Ibuprofen adsorption measurements were registered by using an UV/VIS Lambda XLS double beam spectrophotometer (Perkin Elmer, USA) with a fixed slit width (1.5 mm) and 1 cm quartz cells. All experiments were run in triplicate.

Adsorption behavior was analyzed by performing a kinetic analysis carried out by means of batch adsorption experiments. Erlenmeyer flasks were placed in an orbital shaker at 150 rpm and 25 °C, using 0.125 g and a starting concentration of 20 mg/L. Aliquots were extracted at 1, 5, 10, 20, and 40 min for analysis of phosphates and ibuprofen and filtered through a 0.45 μm pore size membrane before analyzing.
The adsorption capacity for the LDHC was calculated at each time, qt (mg/g), following Equation (6): where C0 and Ct (mg/L) are the concentrations of phosphate or ibuprofen in the solution before and after treatment, respectively, V is the volume of the wastewater used during batch experiments (L) and W (g) is the mass of LDHC.
The percentage of phosphate or ibuprofen removed from wastewater was calculated, both for LDHD and LDHC, following Equation (7):
The difference between the initial concentration and the one measured in solution will offer the adsorbed concentration. Therefore, on the basis of the phosphate or ibuprofen removed after treatment of wastewater, the adsorption capacity of each LDH used was calculated.
Kinetic adsorption onto the LDHC was studied using different kinetic models: pseudo-first-order [26], pseudo-second-order [28], Chien–Clayton model [30], intraparticle diffusion [31], and Bangham model [34].

2.5. Study of the Recovery of the Adsorbate

On completion of the adsorption process, the adsorbent composite was recovered from the solution with centrifugation at 4000 rpm for 2 min followed by microfiltration. Experiments of phosphate recovery were carried out by adding 5 mL of distilled water to the solid. Only LDHC was employed, as it showed the best results in the previous experiment. Batch desorption was carried out for 10 min at 150 rpm in an orbital shaker. The adsorbent was then separated from the distilled water by filtration, and the released phosphate was measured in a spectrophotometer using the method described above.

3.1. Formulation of an Adsorbent Composite for Removing Phosphates and Ibuprofen from Wastewater

Table 1 shows the pollutant adsorption tests, carried out using both LDHD (oven-dried LDH) and LDHC (calcined LDH), for different initial concentrations of phosphate. Adsorption was lower for the LDHD, with average adsorption of 52.5% and no significant variations between treatments. However, LDHC adsorbed an average of 70% of phosphate, with the maximum adsorption observed at the highest tested concentration, 20 mg/L, where the adsorption reached a percentage of 77.3%.
Structurally, there was a significant difference between oven-dried and calcined LDH. Moustafa et al. [39] analyzed the Zeta potential of Zn-Fe LDH nanoparticles and confirmed the high stability of the solid as well as the electrostatic interaction between the metals and the pollutant. The zero-point charge of Mg/Al-LDH showed a positive surface, which benefits the phosphate adsorption, although it is pH-dependent [40]. Oven drying forms the hydrotalcite-like compounds, which lose the layered structure when it is treated above 450–500 °C, forming bimetallic oxides [41]. However, calcined LDH has a “memory effect,” which enables the reconstruction of its original structure after hydration and immobilizes hazardous anions for balancing the charge, which could occur by intercalation and surface sorption [42,43]. Although calcination is usually carried out at high temperatures, there are studies that report that treatments at 280 °C, in FeCuNi-LDH, produce a larger surface area compared with treatments at 550 °C [44]. In addition, an important effect to be considered is the inhibitory effect on the sorption due to coexisting anions in the environment [42].
Regarding ibuprofen adsorption onto the LDHC and LDHD composites (Table 2), results showed the same pattern as phosphates, with the highest adsorption achieved when using the LDHC. Average adsorption of 58% was observed in this case, whereas adsorption decreased to an average of 35% when using LDHD.
MgAl-LHD has shown its potential as a drug carrier, typically intercalating solutes in the layer space during co-precipitation [45], leading to an increase of inner space from 7.89 Å to 14.71 Å. Therefore, sorption capacity may differ when ibuprofen is added to the solution after LDH has been synthesized, as ibuprofen may exceed the space available for solute assimilation. Scarce studies have been found related to ibuprofen removal from water using LDH. Kumari et al. [46] tested a ZnAl-LDH for diclofenac sodium removal in water and doped the structure with Bi2O3 to increase size. In these conditions, ibuprofen adsorption was significantly increased, although adsorption occurred apparently on the outer surface.
In the specific case of the mixed solutions of phosphate and ibuprofen, it can be seen that in both cases, LDH shows a greater adsorption capacity for ibuprofen than for phosphate (Table 3). Compared to the behavior shown by each LDH composite when there is only one contaminant in the water, the amount of phosphate adsorbed decreases while that of ibuprofen increases, especially in the case of LDHD (10 percentage points less of phosphate and almost 20 percentage points more of ibuprofen). As it happens in the previous cases, LDHC shows the highest adsorption of both compounds.

3.2. Evaluation of the Adsorption of Phosphates and Ibuprofen in the Composite: Kinetic Study

3.3. Evaluation of the Recovery of Phosphates from the Composite

Desorption was carried out in this study to adsorbed phosphate in LDHC with water. The initial phosphate concentration was 20 mg/L, and the treatment was able to recover up to 11.77 mg/L after 10 min of treatment, which supposes the 59% of the phosphate in the initial solution. The interest in the recovery of phosphate relies on the fact that it is a material that could be revalorized as a fertilizer. Phosphate recovery is a matter of great concern due to the depletion of natural sources of phosphorus [49]. In fact, the European Commission has included phosphate rock in the list of 20 critical raw materials, being considered an irreplaceable raw material with great economic impact. Thus, other authors have also paid attention to its recovery in water. Nuryadin et al. [47] also found promising results in its desorption using 1 N NaOH in ZrO2/Mg-Fe LDH. In addition, Onishi et al. [50] tested the potential of these materials to act as phosphorus fertilizer analyzing the release sorption.

The adsorption performance of phosphate and ibuprofen in a layered double hydroxide (LDH) clay doped with magnesium and aluminum was investigated in this study. This work demonstrates that LDH composites are capable of removing both contaminants from wastewater, although the calcination of the LDH is recommended instead of oven-dried LDH, as it significantly increased the adsorption capacity. Phosphate was more efficiently removed when analyzing single solutions, reaching adsorptions up to 70% after 20 min. Instead, ibuprofen seems to diffuse better in mixed solutions, reaching adsorptions up to 64%, on average. Different kinetic models explain their behavior, with ibuprofen fitting to a pseudo-first model and phosphate to a pseudo-second-order model. Finally, phosphate could be efficiently recovered from wastewater, with recoveries up to 59% in 10 min.

The authors thank the Defense University Center at the Spanish Naval Academy (CUD-ENM) for all the support provided for this research (Project PICUD-2020-03). 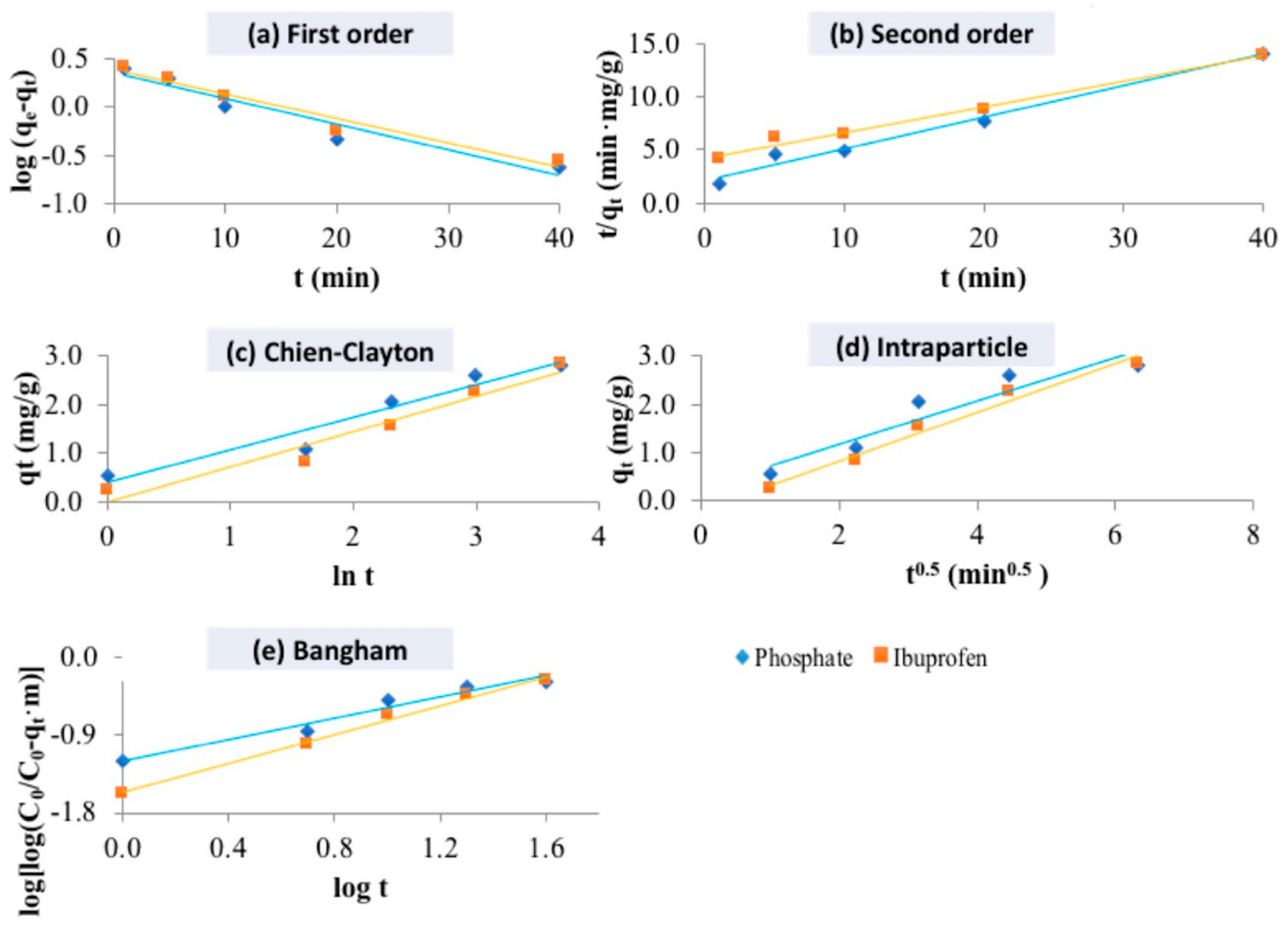