The Use of Zooplankton Metrics to Determine the Trophic Status and Ecological Potential: An Approach in a Large Mediterranean Watershed

In the European Water Framework Directive, zooplankton was not included as a Biological Quality Element despite its important place in the aquatic trophic web. In the present study on zooplankton abundances and biomasses, we used several metrics to test their ability to detect differences among trophic statuses and ecological potential levels, and collected a large sum of data in more than 60 reservoirs at Ebro watershed, on more than 300 sampling occasions over 10 years. Our results indicate that most zooplankton metrics are correlated to environmental variables that determine reservoirs’ trophic states, especially chlorophyll a and total phosphorus. The metrics with better sensitivity to differentiate trophic states and ecological potential levels were ZOO (total zooplankton), LZOO (large zooplankton), CLAD (cladocerans), and ZOO:CHLA (zooplankton:chlorophyll a ratio). Microcrustacean metrics such as DAPHN (Daphnia), COP (copepods), CYCLO (cyclopoids), and CALA (calanoids) were good at differentiating between high and low water quality in trophic status (oligotrophic–eutrophic) and ecological potential (good or superior–moderate). Thus, zooplankton can be used as a valuable tool to determine water quality; we believe that zooplankton should be considered a Biological Quality Element within Water Framework Directive monitoring programs for inland waters. View Full-Text
Keywords: bioindicators; biological quality element; reservoirs; water framework directive; ebro watershed bioindicators; biological quality element; reservoirs; water framework directive; ebro watershed
►▼ Show Figures 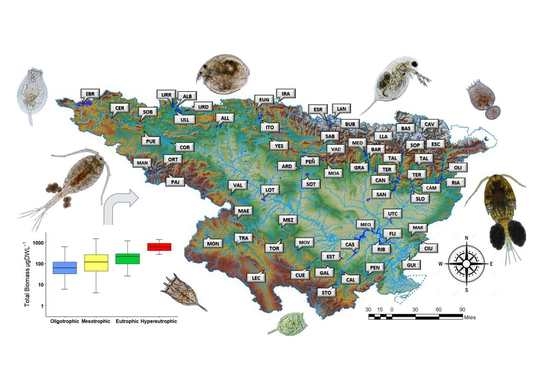