Multifractal Analysis of River Networks under the Background of Urbanization in the Yellow River Basin, China

The study area is located between 32° N, 96° E and 42° N, 119° E, and contains more than 370 counties in nine provinces of China (Figure 1): Qinghai Province (QH), Sichuan Province (SC), Gansu Province (GS), Ningxia Hui Autonomous Region (NX), Inner Mongolia Autonomous Region (NMG), Shaanxi Province (SA), Shanxi Province (SX), Henan Province (HN), and Shandong Province (SD). The Yellow River begins in the Bayan Har Mountains in the Qinghai Province of China and empties into the Bohai Sea. It is 5464 km long with a basin area of 795,000 km2 and constitutes the fifth longest river in the world and the second longest in China [26]. The Yellow River basin encompasses a vast area with many mountains and has a great difference in elevation from east to west (about 4800 m). The landforms of the various regions associated with the river basin are also very different. Furthermore, the basin is in the middle latitudes, and so it is more affected by atmospheric changes and monsoon circulation. Thus, there are significant differences in climate within the basin. The temperature difference across the Yellow River Basin is very large. In general, as the terrain of the three-tiered elevation changes from west to east, the temperature changes from colder to warmer. The east–west temperature gradient is notably greater than the north–south gradient. The annual temperature difference in the basin is also relatively large. The general trend is that the annual average temperature in the area north of 37° N is between 31 °C and 37 °C, while the temperature in the area south of 37° N is mostly between 21 °C and 31 °C. Precipitation in the Yellow River Basin is concentrated, unevenly distributed, and has significant inter-annual variation. The annual precipitation in most of the regions is between 200 and 650 mm. It is greater than 650 mm south of the middle of the upper and lower reaches, while the precipitation in the deep inland areas of the Ningxia Hui and Inner Mongolia Autonomous Region in northwestern China is less than 150 mm. The basin has a strong evaporative capacity, with an average annual evaporation of 1100 mm. The upper reaches of Gansu Province, Ningxia Hui Autonomous Region, and the central and western regions of the Inner Mongolia Autonomous Region have the largest annual evaporation in China. The maximum annual evaporation in these regions can exceed 2500 mm.

The first step in calculating the multifractal features of the study area during different periods was the extraction of the river networks. Digital data of the studied river networks during the 2000s and the 2010s were obtained by digitizing 1:50,000 digital line graphics (DLGs). For the 2020s, data were derived from OpenStreetMap (OSM, https://www.openstreetmap.org/ (accessed on 20 August 2021)). We first identified the river data from the digital line graphics and then extracted them using ArcGIS 10.4. To ensure accuracy of the river network vector data, the river network of the study area was corrected by adding and deleting the river networks in three periods based on Google Earth remote sensing images. Based on the above data and the boundary vector data of the Yellow River Basin provided by the National Cryosphere Desert Data Center (http://www.ncdc.ac.cn (accessed on 20 August 2021)), the river networks of the Yellow River Basin in three periods were clipped using ArcGIS 10.4.

(1)
The study area F is covered with boxes of size , and the total number of non-empty boxes is denoted . is the probability measure of the region contained in each box; that is, the distribution probability of the characteristic information. differs for different units. and e are related via Equation (1): where α is a singular exponent that corresponds to different units and is determined by the probability measure (). can be computed using Equation (2): where is the characteristic information of the river network in box i (e.g., river length), and is the total characteristic information of the study area under the scale of e, which reflects the overall morphological features of the studied basin. In this study, is the sum of the river lengths in box i, and is the total length of the study area.
(2)
The partition function is defined as the weighted sum of the slope distribution probability to power q (Equation (3)): where q is the order of the statistical moment, , and is used to describe the magnitude of the singularity in the multifractal analysis, and a different q represents the important role played by different river network probability subsets in the partition function. In the calculation, we took different q values and calculated the partition function under the corresponding q value. There is a good linear relationship between the logarithm of the partition function and the logarithm of the box size when the networks are multifractal in nature. This is an important basis for judging whether a research object has multifractal properties.
(3)
For a given moment q, the relationship between the mass exponential function and is given by Equation (4). In the calculation, the size of the box under the corresponding q value is changed, and the partition function under the corresponding box size is computed. Then, can be computed through the coefficient of the straight line fit of ~ (Equation (5)). With the change in q, the corresponding can be calculated using the above procedure. where is the eigenvalue of the multifractal behavior. When is a convex function with respect to q, the research object exhibits multifractal features. This is another important criterion for judging whether a research object has a multifractal property.
(4)
The generalized fractal dimension is defined by Equation (6) and varies with q. can reflect the singularity of each subset of the research object from an overall perspective, so there is the relationship between and α in Equations (7) and (8).

(5)
When is differentiable, the multifractal spectrum and singular exponent can be obtained by the Legendre transformation of Equation (9).

Here, is usually a smooth, upward convex curve. Each point on the~ curve represents the fractal dimension of the subset with the same singular exponent [30,31]. The ~ curve is converted to a point in the mono-fractal.
Three parameters in the multifractal spectrum are important when describing the heterogeneity of river networks (Figure 4):

3.4. Correlation Analysis of Multifractal Indicators and the Urbanization Process

This research was funded by the Key Scientific and Technological Project of Henan Province, China (grant number 212102210377).

We would like to thank all editors and reviewers for their insightful comments, which helped us improve the quality of this paper. 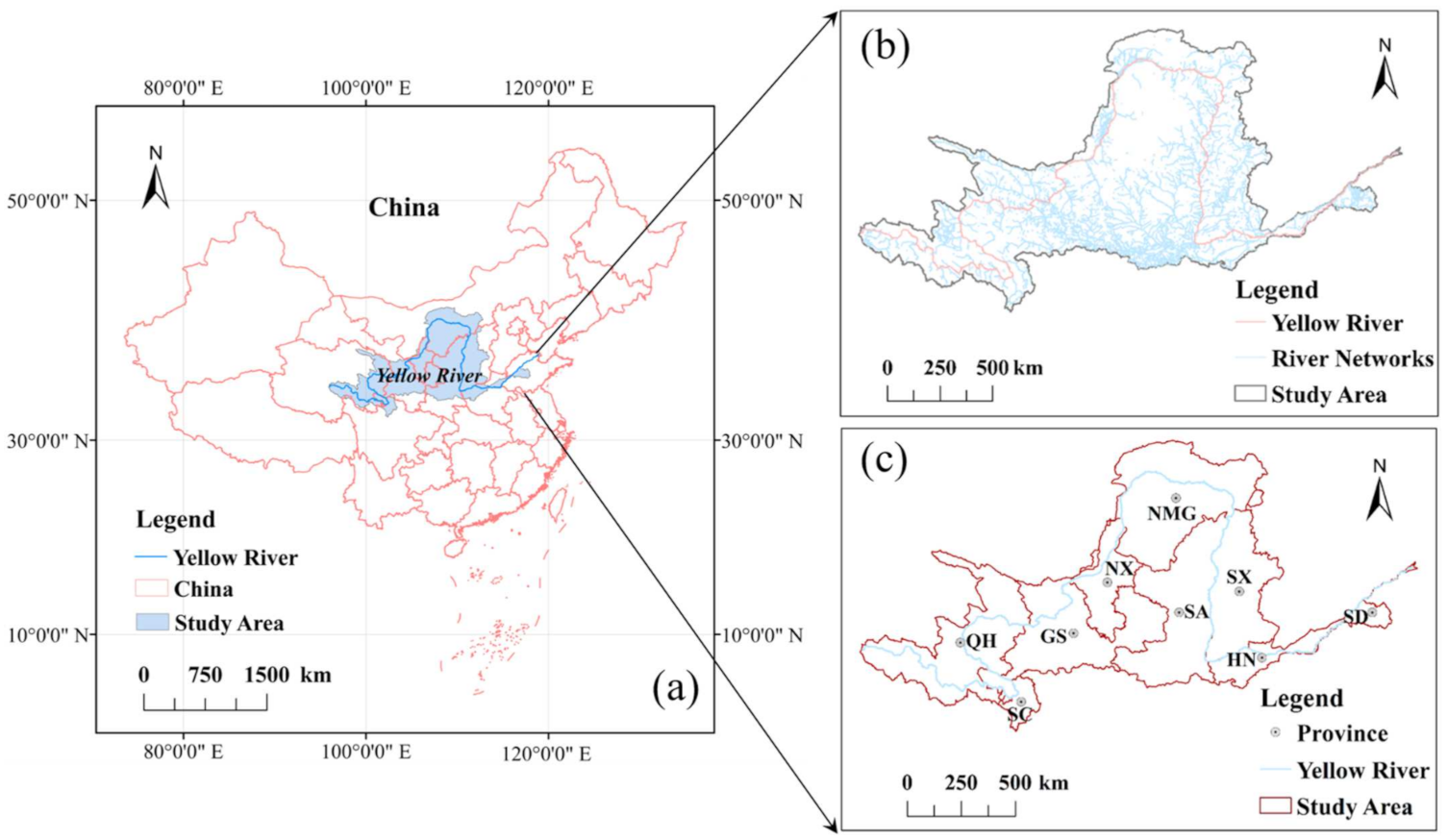 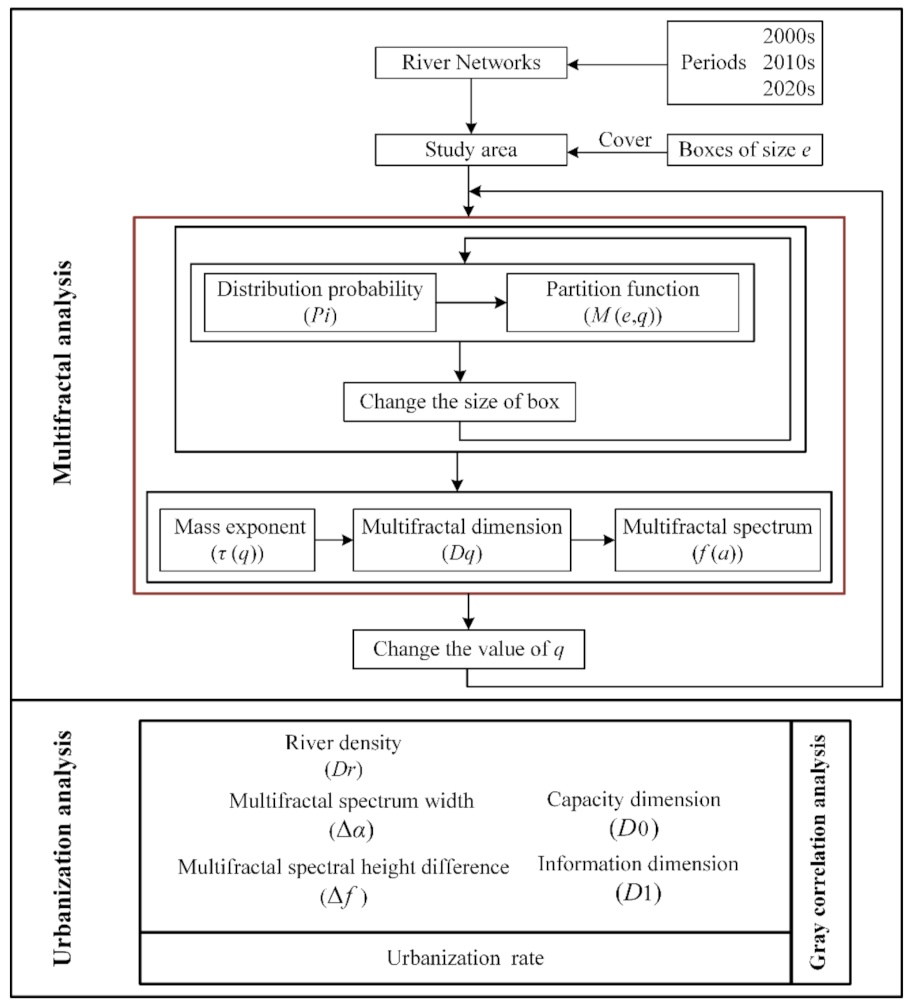 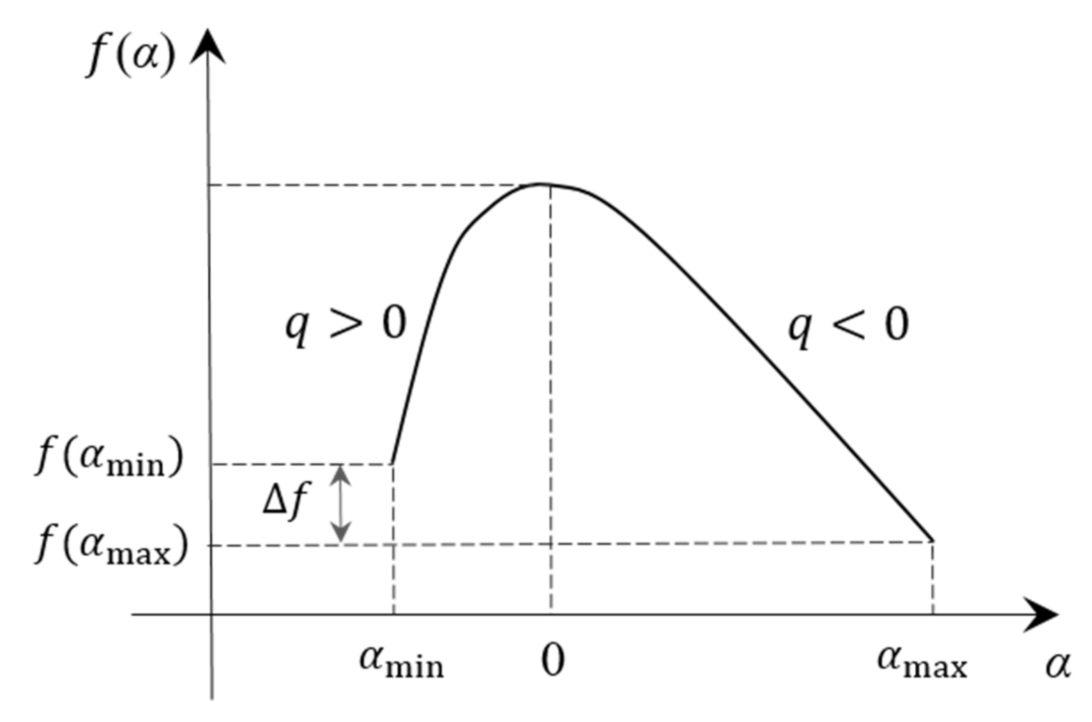 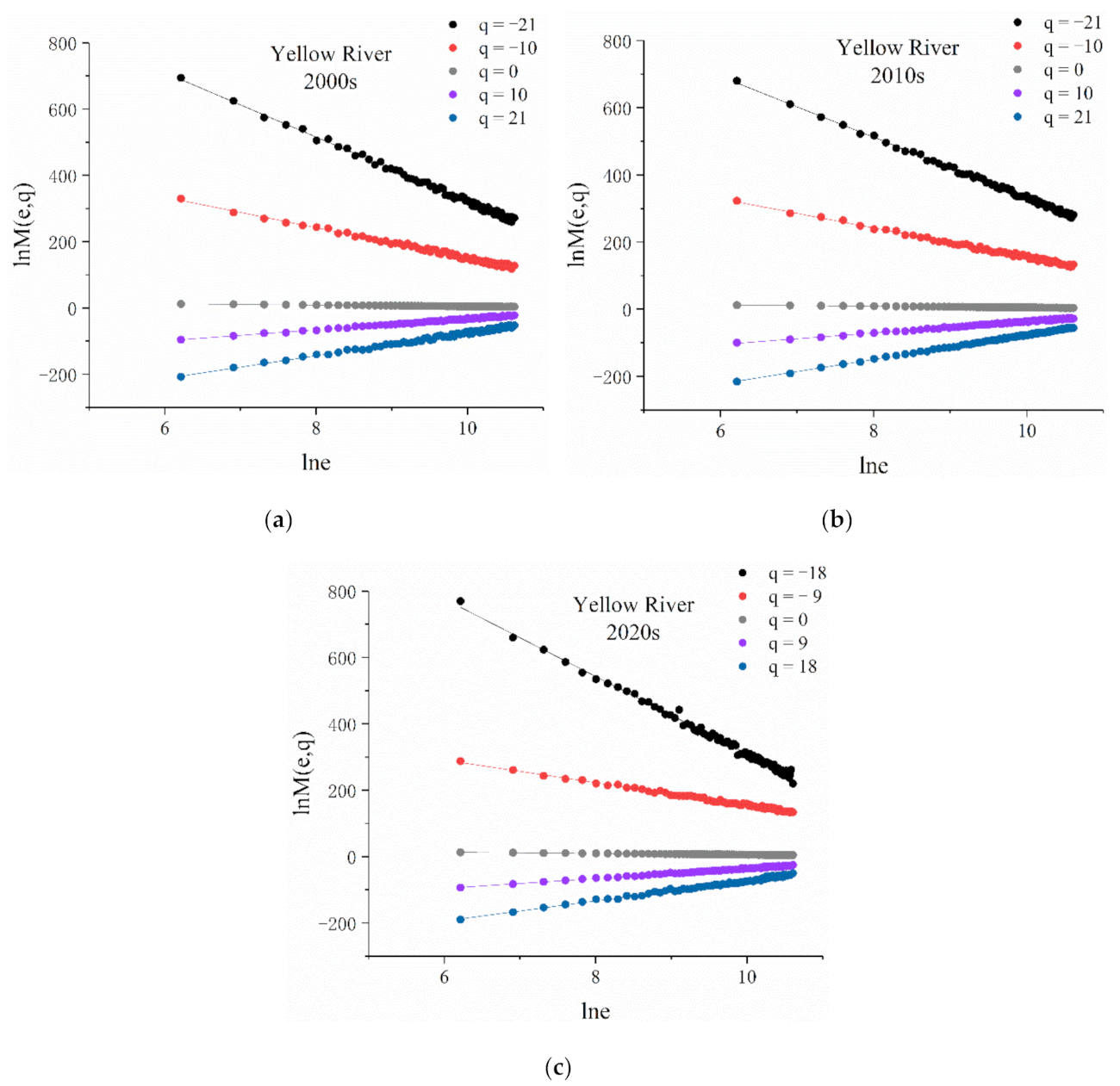 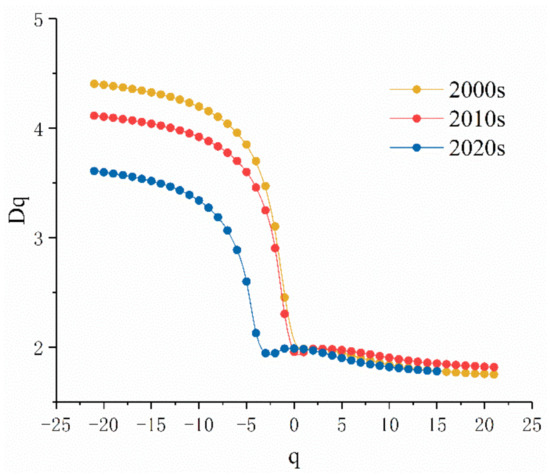 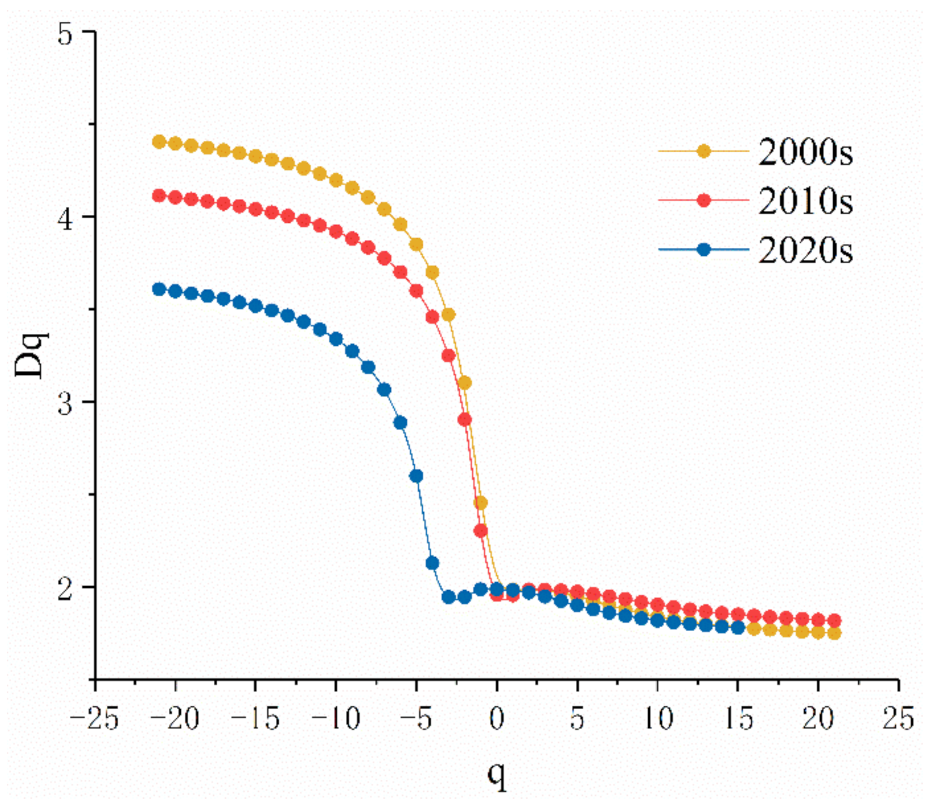 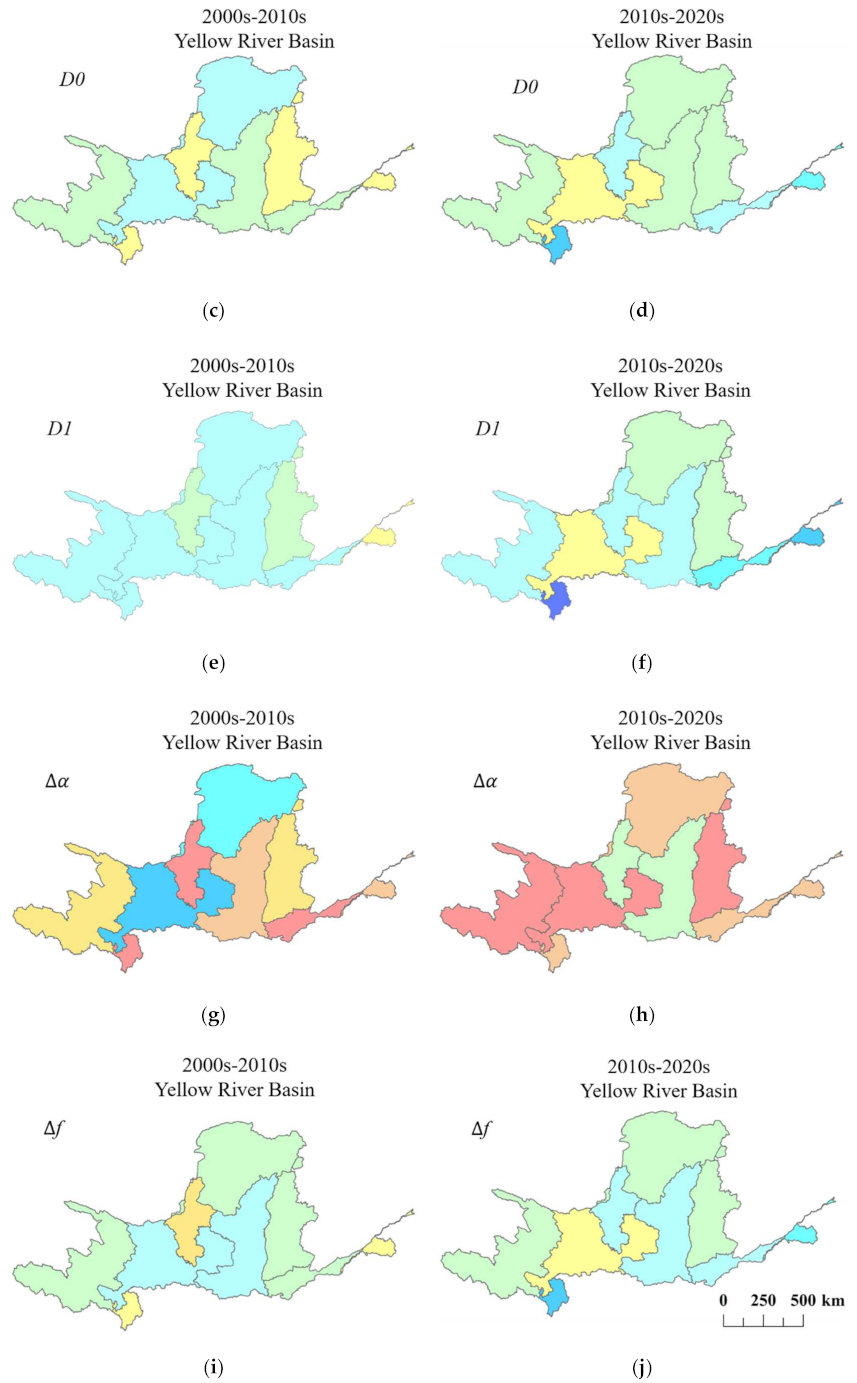