Coral communities of the Florida Reef Tract (FRT) have changed dramatically over the past 30 years. Coral cover throughout the FRT is disproportionately distributed; >70% of total coral cover is found within the inshore patch reef zone (<2 km from shore) compared to 30% found within the offshore bank reef zone (>5 km from shore). Coral mortality from disease has been differentially observed between inshore and offshore reefs along the FRT. Therefore, differences between the response of inshore and offshore coral populations to bacterial challenge may contribute to differences in coral cover. We examined immune system activation in Porites astreoides (Lamarck, 1816), a species common in both inshore and offshore reef environments in the FRT. Colonies from a representative inshore and offshore site were reciprocally transplanted and the expression of three genes monitored biannually for two years (two summer and two winter periods). Variation in the expression of eukaryotic translation initiation factor 3, subunit H (eIF3H), an indicator of cellular stress in Porites astreoides, did not follow annual patterns of seawater temperatures (SWT) indicating the contribution of other stressors (e.g., irradiance). Greater expression of tumor necrosis factor (TNF) receptor associated factor 3 (TRAF3), a signaling protein of the inflammatory response, was observed among corals transplanted to, or located within the offshore environment indicating that an increased immune response is associated with offshore coral more so than the inshore coral (p < 0.001). Corals collected from the offshore site also upregulated the expression of adenylyl cyclase associated protein 2 (ACAP2), increases which are associated with decreasing innate immune system inflammatory responses, indicating a counteractive response to increased stimulation of the innate immune system. Activation of the innate immune system is a metabolically costly survival strategy. Among the two reefs studied, the offshore population had a smaller mean colony size and decreased colony abundance compared to the inshore site. This correlation suggests that tradeoffs may exist between the activation of the innate immune system and survival and growth. Consequently, immune system activation may contribute to coral community dynamics and declines along the FRT. View Full-Text
Keywords: Porites astreoides; patch reefs; coral bleaching; immunity; eIF3H; TRAF3; ACAP3 Porites astreoides; patch reefs; coral bleaching; immunity; eIF3H; TRAF3; ACAP3
►▼ Show Figures 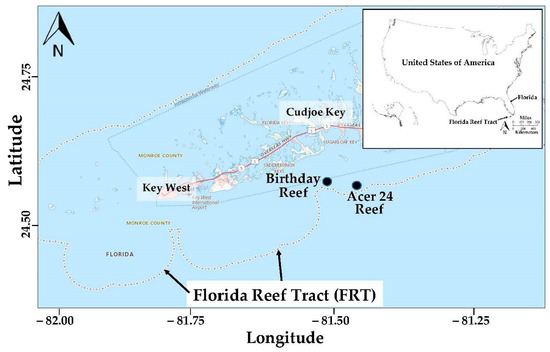